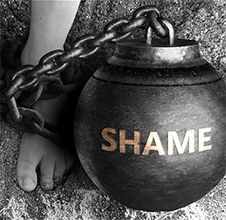 Entitled “Flipping the Script on Shame and Shaming,” the article was written by Gregg Ten Elshof, author and professor of history at Biola University, a private evangelical Christian institution in La Mirada, California.

What struck me as curious about the essay – written by an evangelical Christian who kept referring to “the soul” – is that it castigates certain coercive aspects of public shame in writing. current American culture when this same strategy was essential to a ruthless Christian indoctrination from the beginning of the faith. This is hypocrisy.

What were the medieval fires of the “heretics” at the stake if not the ultimate public shame and rejection of a person when all else fails. This raises the question: “Is Christ” love? »That Professor Elshof poses several times in the affirmative?

When the then struggling faith really took off in the Middle Ages, it was fear of damnation that drew converts to the church and the ruthless shame (if they weren’t fearful and intimidated enough by the church and its dogma already) that held them there.

So, for an evangelical Christian scholar, trying to subtract shame as a positive force in a religious context seems a bit rich to me.

The problem with that philosophical haircut is that without awareness of being potentially ashamed publicly because of their hidden behavior or overt thoughts, many, if not most, people might not feel much shame at all.

I suggest that real shame is what one should only feel when doing something that is inherently and unjustifiably detrimental to the health, peace and dignity of others. And heresy is clearly not that.

So when religious people try to alleviate shame, it is more like an attempt to distract from their own coercive guilt by applying shame as a tool of indoctrination and control.

Yet, as Elshof tries to explain:

“Something strange is happening with the way people view shame. On the one hand, there is a growing and passionate consensus that shame is toxic and we do well to eradicate it from the range of emotions we routinely experience. A large and rapidly growing body of empirical research correlates felt shame with anxiety, depression, suicide, eating disorders, rage, and other manifestations of dysfunction. So abound the resources that aim to immunize us from the painful experience of shame.

“On the other hand, we seem to be increasingly supportive of humiliating others as a strategy for pursuing social programs. Clear acts of public shame fuel movements like #MeToo and the laudable fight for racial equality. The rise of social media makes it too easy to shame those who break relevant norms / norms.

“And the shame experienced by those who go through these events is sometimes life-destroying. Even those who do not actively shame authors display a seemingly insatiable appetite for accounts of public shame, and tacitly approve of such public disgrace by endlessly consuming the stories and sharing them with friends.

What seems to me to be essentially relevant in this context is not the humiliation per se, but What the behavior or state of mind is humiliated. For the purposes of this discussion, note that Christianity shames members for not believing absolutely enough in its dogma (and behaving accordingly), when faith venerates a gospel of ancient mythical fantasies, unverifiable truths.

In this case, if you are a humanist, it would undoubtedly be immoral and cruel to shame someone, and to throw upon him the panoply of psychic and emotional pain that this implies, so as not to fully embrace an idea which cannot even be substantiated in reality.

On the other hand, shaming a sexual assailant or assailant of women, for example, is entirely appropriate because – unless there is an irrational rush to judgment with inadequate evidence – an illegal act.

As such, shame is defensible when what is shameful must be arrested or punished. Like pedophile priests. Serial killers. Anti-coronavirus vaccines. Donald Trump’s sociopathic lie. Certainly not abortionists of human zygotes, blastocysts, 10 week embryos or even a two and a half inch and one ounce embryo at the end of the first trimester of 12e week (the threshold for legal abortions in the United States under the landmark 1973 Supreme Court decision Deer vs. Wade decision).

A better case could be made sometimes, perhaps, to shame women and their doctors who collaborate on non-therapeutic abortions significantly after trimester, but new Texas anti-abortion law bans all abortions after 6 weeks, well before the Supreme Court deadline. It’s even before most women know they are pregnant.

In fact, it was the Texas legislature that passed the bill and the governor who enacted it. who should be ashamed in this case – to ensure a load of fear, anxiety and no good options for pregnant Texas women who would choose to have an abortion in the future.

As if that would reduce abortions, which tough anti-abortion laws never did. Women are finding a way, usually much more expensive, dangerous, and fearful than what is now available through Planned Parenthood and other providers of legal abortion. It is simply Christianity that imposes its religious morality on the rest of us, a practice that must to be arrested.

Consider the irony of it all. If the evangelical and social reactionaries in Texas were serious about reducing abortions, they should simply have accepted their already codified legality across the country. Studies show that legal abortion lowers abortion rates all over. A 2018 NBC-TV report reported:

“Abortion rates have fallen over the past 25 years, even as more countries have made the procedure legal and easier to obtain, according to a new report released on Tuesday.

Why again force women to give it up? Because for religious reactionaries, it’s biblical, not rational. And that’s a problem, because “biblical” is another way of saying “invented”. Is this really how we want to base our most important societal decisions, when effective practical solutions exist in the real world?

What is really shameful is the large number of Americans who organize their lives around invented “supernatural” ideas (it is in quotes because such a kingdom obviously does not exist) and then force others to suffer. miseries unjustly inflicted if they do not submit to their religion. -based on the edicts.

To deplore it would be good shame, in my opinion.

Professor Gregg Elshof in his essay explains that it is wrong to insist that shame is “inherently toxic and destructive of the soul”.

“Instead, we should be more wary of public shame and less of felt shame,” he wrote.

It would certainly work well for Christianity, which could continue to publicly shame heretics, backsliders and other cursed pagans without consequence, as they have done for centuries, while rejecting all responsibility for the excruciating shame felt that the shameful themselves feel. must then endure.

How regulation could change payday loan interest in 2021