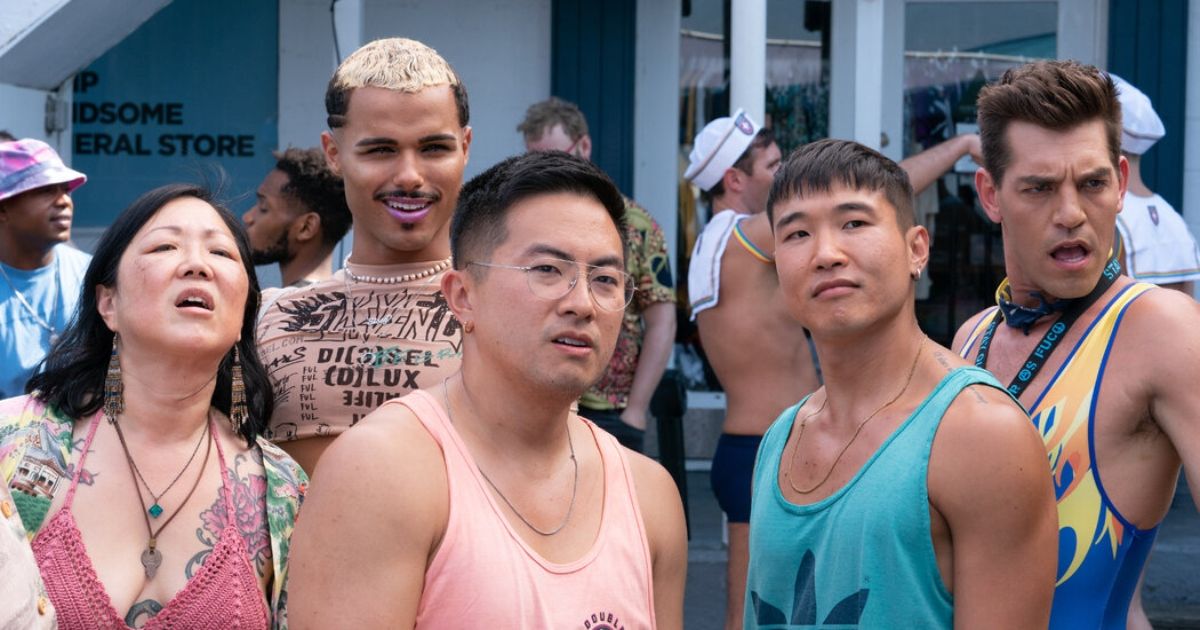 Although the 2020s are just beginning, we’ve already been blessed with plenty of memorable comedy movies. It seems like people need to laugh more than ever, especially given the tough times we’re living in right now. Indeed, movies are a sanctuary for many of us, and what better way to distract ourselves from the daily atrocities than watching a good comedy movie that has the ability to draw real laughs out of you? While there’s still plenty of time to do a definitive ranking of the best comedies of the 2020s, here’s our ranking.

Directed by Andrew Ahn, Fire Island is a 2022 romantic comedy starring Joel Kim Booster, Bowen Yang, Conrad Ricamora, James Scully and Margaret Cho. Inspired by Pride and Prejudice, the storyline follows a group of gay friends who go on a summer vacation to Fire Island every year, but this year they are thrown into chaos due to turbulent romances and classism. This story is a true queering of Austen’s classic novel, and you can definitely feel the love and respect the creators have for the source material. The group of friends serves as a queer adaptation of the Bennett family, now acting as chosen family (a staple of queer storytelling). There should definitely be more modern adaptations of the classic story in the years to come.

The recently published Minions: The Rise of Gru is the long-awaited animated comedy produced by Illumination. It serves next to Minions film and acts as the fifth addition to the Despicable Me franchise. This time we focus on 11-year-old Gru as he decides, at such a young age, to become a supervillain with the help of his minions. The Rise of Gru had been delayed for two years due to the COVID-19 pandemic, but despite the wait, it received positive reviews. We see young Gru as a quirky little kid who dresses like an adult and enjoys committing crimes. It seemed to work as critics praised its comedic aspects, specifically aimed at families. So far, according to Deadline, the film is the fourth highest-grossing film of 2022.

The originality of films knows no borders and Language course is the proof. In her debut as a director, Natalie Morales decided to make a film about a character named Adam, whose husband surprises her with Spanish lessons. As the lesson progresses, he develops an unexpected friendship with his teacher Cariño. The film had its premiere at the 71st Berlin International Film Festival and received positive reviews for its portrayal of friendship and compassion. Language course shows how useful and real online friendship can be, especially during times when no one was really allowed out.

Baby Shiva is a 2020 comedy film written and directed by Emma Seligman. The film stars Rachel Sennott in the lead role of Danielle, a young bisexual Jewish woman who doesn’t know what to do with her life or which direction to take. Almost the entire film takes place in real time and in one place: a celebration of shiva. Danielle has to attend the shiva with her parents, but her ex-girlfriend Maya and her dad Max (along with his wife) attend the event. The character is forced to explore his romantic and professional choices under the scrutiny of his family and friends. Although the Baby Shiva is labeled as a comedy, beware that most of them seem very claustrophobic and, at times, reminiscent of the horror genre. You are more than likely to feel stressed and suffocated by the end.

Yes, we’re also including dark comedy horror movies in this list, and it’s all thanks to the enjoyable Spontaneous. In his directorial debut, Brian Duffield decided to adapt the novel of the same name. The plot follows high school kids who suddenly start exploding (literally), and main protagonists Mara and Dylan enjoy their moments as if they were meant to be their last. The visuals add a layer of anxiety from the unexpected explosions, and the love story between Mara and Dylan works perfectly. You’ll probably also enjoy the movie’s soundtrack. The end of Spontaneous brings a fresh look to the questions of existentialism.

Loosely based on the life of director Radha Blank, who also plays lead character Radha, The forty-year-old version is a comedy-drama released in 2020. The plot follows struggling playwright Radha, who wants to make it big before she turns 40, so she turns to the rapper. Having premiered at the Sundance Film Festival, the film was named one of the top ten films of 2020 by the National Board of Review, as listed by AV Club. The writing is extremely hilarious and the story depicts what black writing could be like when allowed to be humanized and quirky on screen. The story arc feels very real and unique. Be sure to watch it on Netflix.

Written and directed by Alice Wu, Half is a coming-of-age comedy-drama starring Leah Lewis, Daniel Diemer and Alexxis Lemire. As a loose modern account of Cyrano de Bergerac, the plot follows Ellie Chu, who begins writing love letters on behalf of Paul, who later becomes her best friend. The letters are dedicated to Aster, who also becomes Ellie’s crush. It beautifully portrays queer children being themselves without the emphasis on their homosexuality. The film uses the rom-com tropes, but employs them platonically. We definitely need more media that values ​​friendships above all else.

Roger Garaudy: why this French intellectual remains unknown. Hint: He was a Muslim