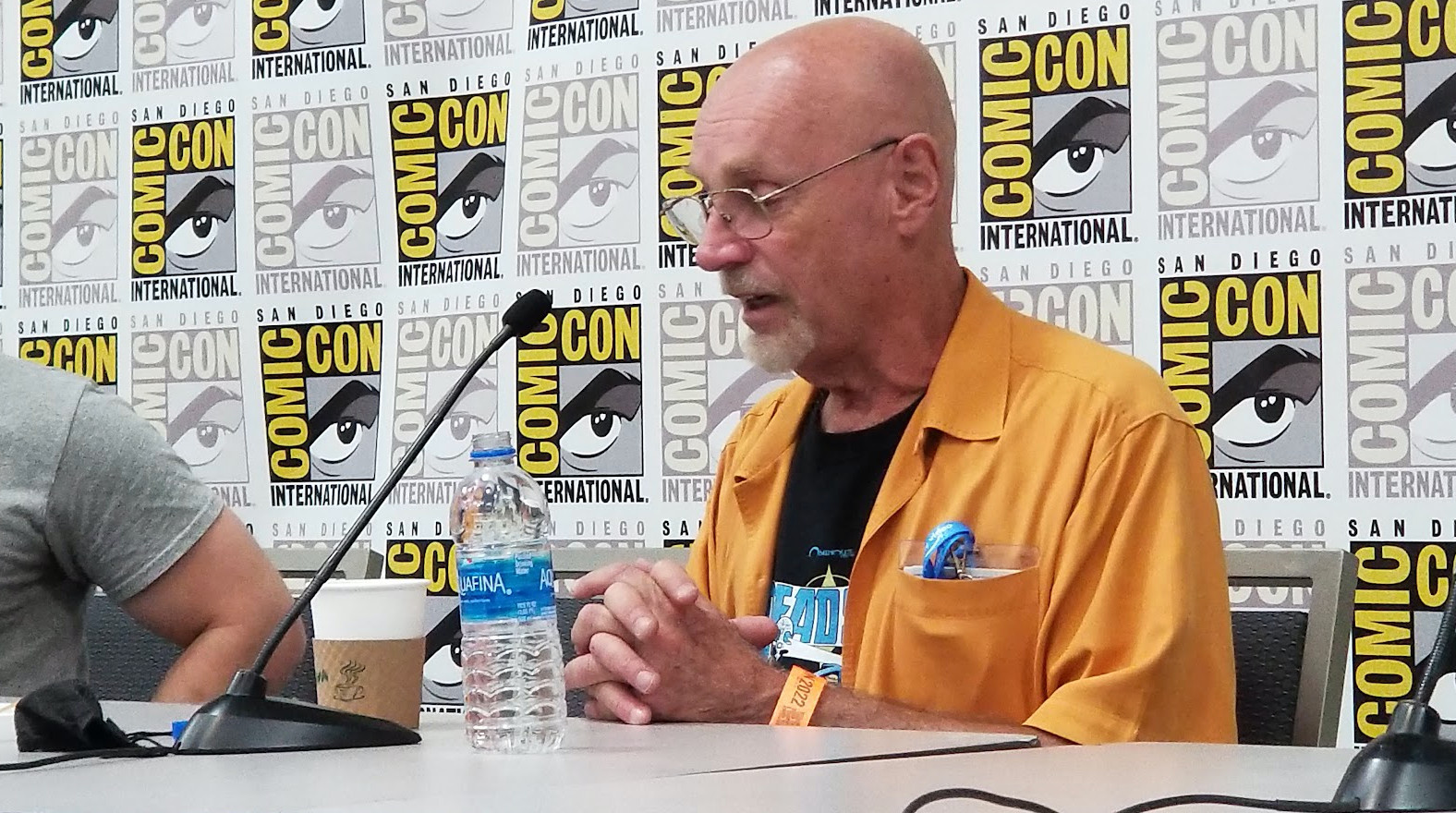 With this wildly enthusiastic greeting, Moderator Cie Jandreau welcomed both the audience and the star of the panel”Jim Starlin: Celebrating 50 Years” to which the man of the moment replied, “Don’t ask too many specific questions.

With that, Coy began with a series of well-crafted questions and topics that Jim was happy to discuss as a way to illustrate the breadth of his fifty years in the comics business as a writer and artist.

It all started in Detroit. Comic books were his culture, because, well, Detroit. His dad worked as an illustrator for Chrysler and as such he brought home art supplies in hopes that he would work on an occasional project at home… which he wouldn’t, but Jim did. would do ! Jim would collect unused art supplies and begin tracing pictures he would find in comic books. One of the comics mentioned was Adventure Comics.

Coy then asked where the “crazy head” and intellectual thinking in some of his stories would come from. Blame the parochial school Jim attended until 8th grade [approx age 13]. While the nuns were mad, and often John Birchers (far-right crazies, common in the 1950s), he was able to absorb many of the lessons they imparted, because for Jim, everything is input. As a brief digression, he mentioned that he had the good fortune to work with great collaborators like Ron Lim (INFINITY GLOVE) and Berni Wrightson (BATMAN: THE CULT).

The topic of Marvel Comics in the 1970s came up. Jim said the entire Marvel Comics set would have fit in half the size of the room we were in (7AB). He was assigned a cabin right next to the creator of HOWARD THE DUCK Steve Gerber…who was narcoleptic, resulting in a “thump” when Gerber fell asleep.

“It was a bit surreal.” The camaraderie was strong and probably contributed to the “drunkenness” as off-peak hours were spent both drinking and discussing philosophers like Carlos Castaneda.

Marvel’s low points began to appear in the 1980s, when it seemed like Marvel would be sold and resold every week. One of the nadirs was when Ron Perlman bought the company. Jim left after completing the INFINITY CRUSADE series (circa 1993).

Then Jim noticed there was a cup of coffee nearby and was glad it was for him.

This followed a brief discussion of an accident five years ago which left him unable to draw for a few years. As a seltzer Jim used a soda maker and it malfunctioned while he was filling a bottle. The bottle, a 16oz water bottle, swelled to the size of a soccer ball, and his wife demanded he get rid of it. Jim took him outside and in doing so he exploded, badly damaging his right hand. He could still write, but he didn’t take up drawing again until future inker DREADSTAR jaime jameson asked for a photo of Dr. Doom, which Jim provided.

The next topic was about the creation of Death. Not the SANDMAN character, but the “love” of Jim’s character Thanos. “It was an accident,” Starlin said. There were two shadow figures in one of Thanos’ first appearances. Jim hadn’t thought too much about it, but he decided to give one of the characters breasts, and the ideas spread from there. Originally, both characters would have been shape-shifting Skrulls.

Since Thanos appeared, the discussion has turned to Jim’s thoughts on the cinematic incarnation of Thanos. “They stayed with the spirit of the character if not the letter.” Which was fortunate, as he feared the character would suffer the interpretative fate that befell the characters in the 2017 JUSTICE LEAGUE movie he saw just before the premiere of AVENGERS: INFINITY WAR.

Jim talked about another film effort inspired by a creation: SHANG-CHI, which he’s only done a few issues on since…it involved drawing cars and horses – which Jim doesn’t like, and the integration of the pulpy character and racist Fu Manchu trope into the backstory. He was grateful to get on CAPTAIN MARVEL next because, space! Which is much more fun to draw and Gil Kane’s drawings were really good. Plus, it was during a time when sci-fi stories could be more than ray guns, thanks to the influence of STAR TREK.

Thus began the time when Jim became famous for killing characters. The first was when he killed Captain Marvel at the editor’s suggestion Jim Shooter, and the second was the death of Jason Todd Robin. Jason Todd’s fate was up for a vote by phone – and Jim knew comic book fans were a bunch of ghouls, so he was sure Jason was doomed. That there was a difference of 72 votes between the two was surprising. It also led to Jim being fired from DC, as the company needed someone to blame.

DC’s loss was a gain for the comics as he quickly returned to Marvel to start the INFINITY GAUNTLET stories (although Jim has expressed interest in creating Joker and Clayface stories).

Jim’s most famous indie character is probably Dreadstar. To that end, there is an intense discussion about a movie or TV show. Dreadstar is a complicated story and there are more examples of comic book character abuse than good, although Jim has expressed admiration for Warners’ DOOM PATROL show and a few of the Marvel shows.

Dreadstar is “An anarchist without a second act”. Jim continues to work on the Dreadstar stories. It has 46 pages in the third book and charts the fourth and fifth books.

A development that Jim is happy about, overall, is that the two majors [Marvel and DC] no longer influence careers as they once did.

The Q&A part touched on a few things like Drax the Destroyer (“Movies made Drax better than me. I was never comfortable with him.”) and Adam Warlock, at least his possible movie incarnation.

Jim didn’t want to say anything but… “I know things and I’m comfortable with what I heard.” That being the extent to which Jim would discuss any involvement in the upcoming james gunn movie GUARDIANS OF THE GALAXY Volume 3.

Finally, in response to a question about the existential drive of his characters, Jim would simply quote joseph campbell: “Find your happiness and follow it.”

Missed any of The Beat’s previous SDCC ’22 covers? Find everything here!