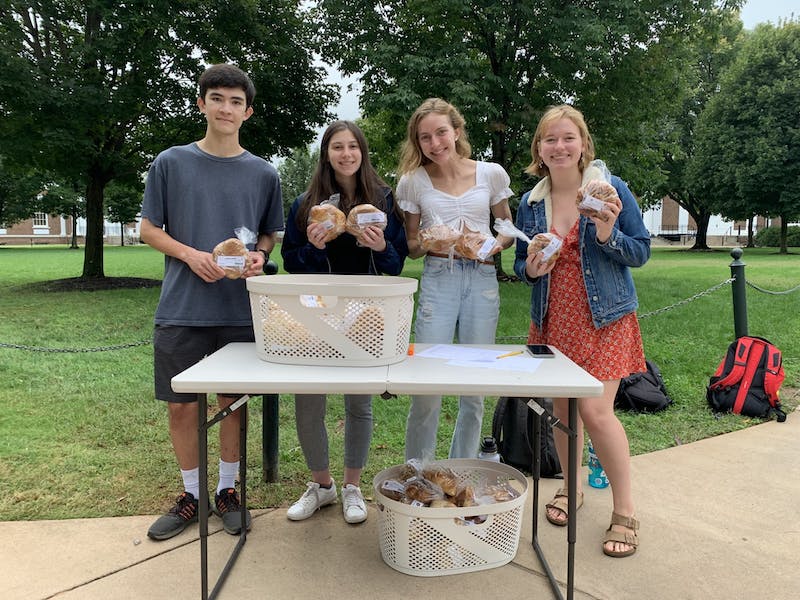 Every Thursday from 10 a.m. to 2 p.m., Challah for Hunger sets up shop on the lawn, selling freshly baked challah bread in a variety of delicious flavors to hungry students commuting to and from class. Proceeds from each sale are split equally between Swipe out Hunger — a national nonprofit that focuses on food insecurity on college campuses — and the Blue Ridge Area Food Bank in Charlottesville.

Founded in 2004 at Scripps College by Eli Winkelman, Challah for Hunger has grown nationally and globally over the past 17 years. The University’s CfH chapter – established in 2011 – is just one of more than 80 chapters owned by campuses in the United States, Canada, the United Kingdom and Australia. The organization seeks to address and combat food insecurity locally and nationally by engaging in activities centered on challah bread which originated in Jewish tradition.

“[We] care about food insecurity advocacy and awareness, both in the community and on college campuses. I think people don’t really know how many students on college campuses, including U.Va., are food insecure,” said Sydney Levy, sophomore and weekly sales manager. “[We want to] share this through the jewish lens of baking challah and share our culture with people.

Getting the challah into the hands of university students and community members is a three-day long process. With hands covered in dough and aprons dusted with flour, CfH members and non-member volunteers band together to make challah dough every Tuesday at 4 p.m. at the Brody Jewish Center. The dough is then plaited and baked on Wednesday at 4 p.m. Challah sales take place on Thursdays on the South Lawn, but the group also sells breads at Congregation Beth Israel – located just outside the city center – on Wednesday evenings.

With reduced COVID-19 restrictions, Challah for Hunger is able to resume normal operations this semester. Unlike previous years, managers and volunteers are required to be vaccinated and wear masks.

The IOC is accepting pre-orders of challah until Monday evening and is preparing additional loaves in anticipation of Thursday’s eager appointments. Although the group primarily does sales on the lawn and at Congregation Beth Israel, there are other challah sales opportunities.

“We also have special sales,” said AJ Eustace, a third-year college student and vice president of sales. “A few weeks ago we held a special sale in the old dorms, where we made miniature challahs, and sold them in front of O’Hill.”

In a normal week without special sales, challah sales average between $300 and $350. Flavored breads are sold for $4 and plain breads are sold for $3. Core flavors include Plain, Chocolate Chip, Cinnamon Sugar, and Garlic Rosemary, plus a special flavor that varies weekly. Last week’s special was all bagel. Members are constantly looking for new flavors to add to the mix, without constraint since all CfH recipes are their own.

“Once a month in December, we host a tasting event,” said Eden Olsberg, fourth-year college student and special sales coordinator. “We are trying [the flavors and] decide which ones will be added to the rotation for the next semester and next year. It’s really fun and you get really creative.

The IOC, made up of an 11-person board of directors, is also opening up the challah-making process to non-member volunteers without needing to register first. The news is mainly spreading via their Instagram @challahatuva.

“I discovered [about Challah for Hunger] via their Instagram first,” Schuster said. “I love to cook and I love challah, so I was like, ‘Oh, I’m going to try this. I went there the first week. I made modeling clay and it was great fun.

In addition to participating in the production process, non-members can get involved in other ways. Most Challah members begin as dormitory representatives in their freshman year, educating their fellow citizens about Challah for Hunger and its mission to fight hunger. During the spring semester – usually in April – applications and interviews for leadership positions take place.

The pandemic has brought its fair share of challenges to the IOC. Before the pandemic, the group produced an average of 150 loaves per week. This year, they are committed to reaching that number again with the help of volunteers.

“Last year was really different because we couldn’t physically be here at all,” said Nicole Ralsgard, fourth-year college student and president. “Instead of buying the challah bread, we found a cookbook and we sold the cookbook. And then we started selling a baking kit with the cookbook, so you can [bake challah] back home.”

Despite the hurdles of the coronavirus pandemic, Challah for Hunger managed to raise over $1,000 for the Blue Ridge Area Food Bank last year through their challah kit and cookbook sales as well as to an Instagram bingo fundraiser. This year, the club is facing adjustment difficulties coming out of the distant year.

“Only a handful of us on [the executive team] were in Challah before the pandemic [and] know how real operations are supposed to work,” Olsberg said. “It just involved those of us who have been here all along stepping up a bit more, which we’re all happy to do for an organization we love.”

Going forward, Challah for Hunger hopes to combine its regular operations with some of its pandemic practices. This includes resuming cookbook sales and increasing social media and education campaigns. Regardless of logistical changes, Levy confirmed that advocacy and awareness of food insecurity, as well as sharing Jewish culture through challah, remains at the forefront of their mission.

“People don’t really know how many students on college campuses, including U.Va., are food insecure,” Levy said. “Another part of it is wanting to share this through the Jewish lens of baking challah and sharing our culture with people in order to… teach about food insecurity through this Jewish organization. [is] our mission.”

Answer to a question: Philosophy and theology

Payday loans without a credit check: Ipass explains the reality