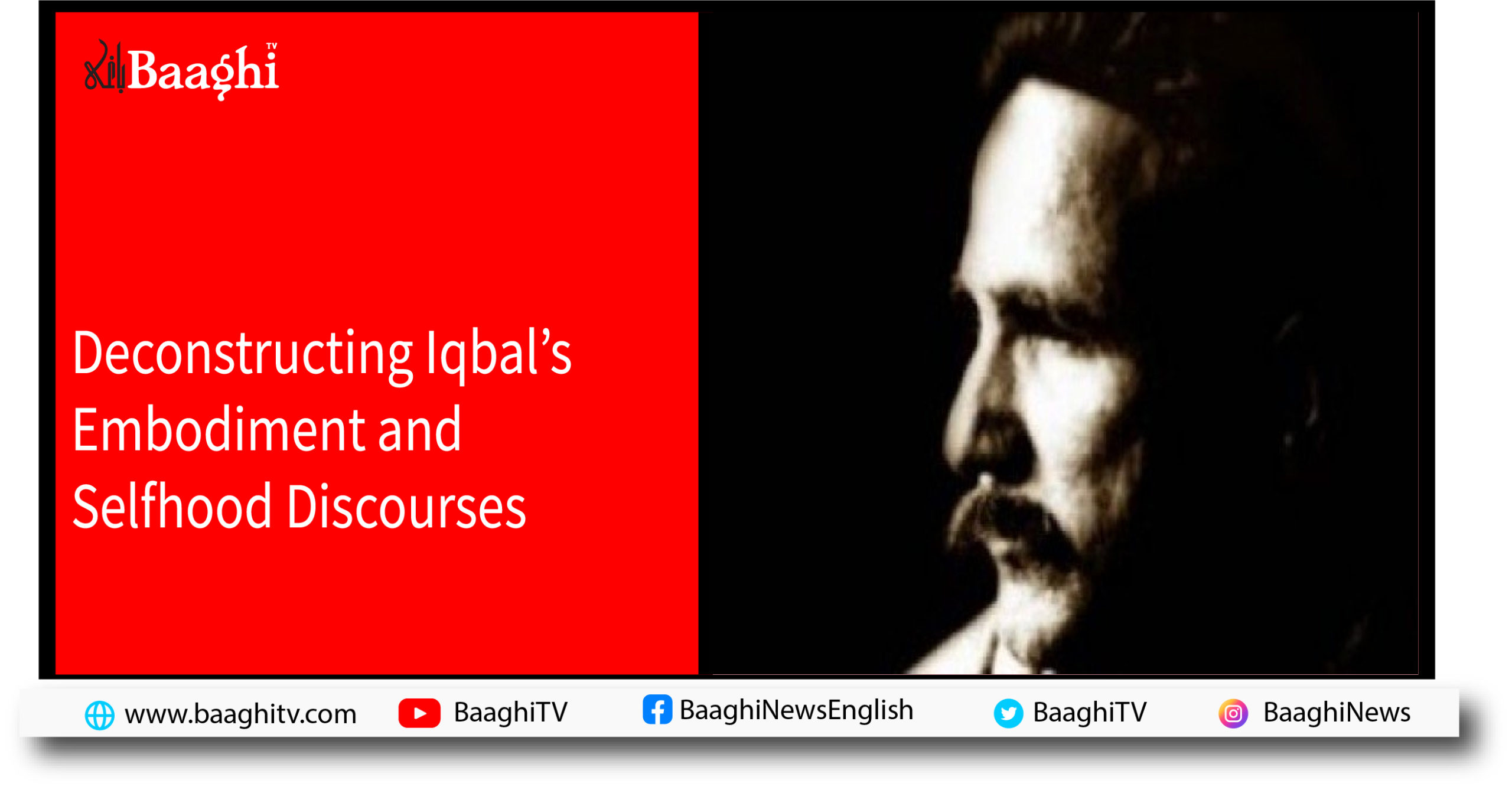 Existentialism began in the 19th century and became widespread in continental philosophy, so a few dominant themes and ways of thinking, particularly around the issue of embodiment and individuality, which permeate these existential philosophies must be seen. in juxtaposition with the deep ideas of Allama Iqbal.

First, the rejection of the Cartesian duality of mind and body is present not only in Iqbal’s thought but is shared both by atheistic existentialists like Merleau-Ponty and Sartre and ethico-religious existentialists like Kierkegaard and Marcel. Existentialists view the human individual as both a body and a mind. They do not however consider him to be the Cartesian res cogitans– a body and a mind – but rather as a dynamic unit. To exist is to be embodied and human existence is none other than this relationship between embodied consciousness and the world.

In the Gulshan-i-Raz-i-Jadid (New Garden of Mysteries), writes Iqbal,

To speak of the body and the soul as two distinct entities is hardly true,

To see them as two things is a sin.

Existentialists generally reject as unintelligible any ontological notion of a consciousness separate from the body or which takes the body as its object. Marcel warns that any reference to our body should not be interpreted as a relation of possession. Because my body is not an object; it’s not something other than me the way the outside world is.

The body is in fact the frame of reference around which the world is organized and which allows consciousness to pursue its concrete possibilities in relation to its projects and movements. The body is lived and experienced as the context and the support for all human endeavors. Echoing this sentiment, Iqbal thinks that the mind or naf is the pure act while the body is only the act that has become visible. He quotes the following from Rumi:

It is not we who get drunk with wine; rather the wine that gets drunk through us.

It is not we who live by the body; the body receives life through us.

For the humanist existentialist Jean-Paul Sartre, the body is experienced as a mode of becoming. In Being and Nothingness he wonders if consciousness has a distinct ontological status outside the body. He concludes that the body is coextensive with personal identity (it is a “perspective” that we experience). Expressing a point of view similar to that of Iqbal, Sartre states that consciousness “exist” his body.

Moreover, for Iqbal, the Self is not a concept or a thing, but rather a dynamic process by which the soul becomes embodied. In the Javed Namah he points out that the dualistic image of soul and body is only an illusion created by language:

You say that the body is the receptacle of the soul.

Do not be dumb ; consider the secret of the soul; does not get tangled with the body.

It is not a receptacle; it’s a state of mind

Calling him his vehicle is a confusion of terms.

So the body, for Iqbal, is a mode of Reality and as such is necessary. The matter is in the spirit of truth, only in spatio-temporal reference. He writes in the Reconstruction that “The unit called man is body when we look at it as acting in relation to what we call the outside world; it is the spirit or the soul when you see it as acting in relation to the ultimate goal and ideal of such an act. And of Zabur-i-Ajam we see Iqbal point out:

The secret of the universe is hidden in the soul,

The body is only one of its modes of expression.

For Kierkegaard “the lack of enthusiasm is the misfortune of man”. This stagnation of the mind is the real cause of despair and of what he calls “sickness to death”. Likewise, Iqbal also believed that “in the life of the spirit there is no stillness”

The project of existentialism is to achieve authentic existence, to recognize forms of “bad faith” and to foster personal authenticity. Religious existentialism assumes that it is a true relationship with God which makes the individual into an existing being, since reality itself is spiritual and Life and Self cannot be divided on the basis of Cartesian plane. Kierkegaard, for example, defines the ego as a synthesis of the temporal and the eternal; we are not only finite psychic beings, but also spiritual beings who become fully ourselves by relating to the God who created us. Melancholy, despair, anguish and boredom are all manifestations of alienation from God. In all forms of despair, the individual is alienated from his true self and this Self can only be reached when it relates to its creator. In Armaghan-e-Hijaz (Gift of the Hejaz), Iqbal writes:

You too, like me, are hidden from yourself. Luck will be the day you find yourself.

For existentialists, estrangement from oneself ultimately results from a loss of will and vitality and its result is inaction. For Iqbal, however, the main purpose of the Qur’an is “to awaken in man the higher consciousness of his multiple relationships with God and the universe.” It is therefore essential that man rediscover his true spiritual self and therefore his freedom and creativity.

In one major point, however, atheistic existentialism differs from Iqbal’s thinking on the question of the origin of the Self. For Sartre, “man finds himself thrown into existence” while human life itself is absurd. And how could it be otherwise, without belief in God? Life and freedom are also aimless, and the world and our existence are without justification. This lack of meaning why, for Sartre, the human condition is plunged into anguish. But Iqbal draws his inspiration from the Quran, which states,

For Kierkegaard, boredom and melancholy are universal conditions of existence and in fact spiritual evils. In the end, there is only a way out by faith. Iqbal believes that life has a purpose and has specific ends to accomplish. It elaborates in the Reconstruction that “To live is to shape and change ends and objectives and to be governed by them.” Mental life is teleological in the sense that although there is no distant goal towards which we are heading, there is a progressive formation of new ends, goals and ideal value scales as we go along. as the process of life grows and expands.

Likewise, Kierkegaard insisted on constant effort. He claims that the dynamic character of existence manifests itself in the unique individual who strives to exist as a genuine person. Existence therefore truly belongs to the one who strives for it. For Kierkegaard “the lack of enthusiasm is the misfortune of man”. This stagnation of the mind is the real cause of despair and of what he calls “sickness to death”. Likewise, Iqbal also believed that “in the life of the spirit there is no stopping”. In Payam-e-Machrek (Message from the East) he proclaims,

Life is constantly on the move, struggling and walking in its path, and that’s it.

Can you imagine a destination or a goal for the Ocean Waves Caravan?

And still in Bal-e-Jibreel he assures :

Life is nothing but a desire for an endless journey.

For Kierkegaard, getting lost in the mindlessness is “the most terrible thing of all”. Iqbal warns against this state of “conscious inertia” and ghaflat. Ultimately, for Iqbal, spiritlessness equates to non-existence – an existential condition that he greatly lamented, as we conclude with these verses:

God is fed up with the body without a spirit

He is the living God and is the God of the living.

There is a teapot orbiting the sun. You do not believe it ? Prove it.