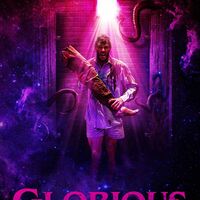 Well that sounds like Rebekah MeKendry’s Glorious will dance all over our eyeballs and brains, won’t it?

Glorious will have its world premiere tomorrow at Fantasia before being taken to Shudder next month. A short teaser has arrived and although it is only fifteen seconds long, fifteen seconds are blocked by a multitude of cosmic and bizarre images. Looks like it’s going to be one hell of a trip. Check it out below, our review will be out tomorrow.

Spiraling after a bad breakup, Wes (Ryan Kwanten) finds himself in a remote rest stop miles from civilization. His situation worsens after he finds himself locked in the bathroom with a mysterious figure (JK Simmons) speaking to him from an adjacent cubicle. As Wes tries to escape, he finds himself an unwitting player in a bigger and more terrible situation than he could imagine…

Ahead of its highly anticipated world premiere at the Fantasia International Film Festival in Montreal, Quebec, Glorious — one of the hottest films of the festival — releases the first preview. Directed by filmmaker, genre journalist and renowned podcast host Rebekah McKendry (All the creatures stirredco-writer of the next Bring It On: Cheer It On Or Die), modern Lovecraftian horror stars Ryan Kwanten (true blood) and Oscar winner JK Simmons (Whiplash). After Fantasia premieres on July 21, the film will be released exclusively on Shudder on August 18.

The majority of the film taking place in a rest area bathroom, Glorious is an intimate indie horror full of unimaginable twists and turns that boasts one of the most jaw-dropping roles of Simmons’ career. Psychedelic, comical, extremely messy and surprisingly emotional, Glorious has all the ingredients for a future cult hit.

“Glorious talks about my adoration for Lovecraft, the gore, the absurd humor, the philosophy and the kind of transgressive movies that make you think I can’t believe I just saw this,” McKendry says. “It’s a wild mix of horror, humor and intoxicating moralistic concepts about our own existential realizations of who we really are, forcing each of us to look into our personal abyss. And sometimes the abyss looks back …and maybe has a favor to ask.