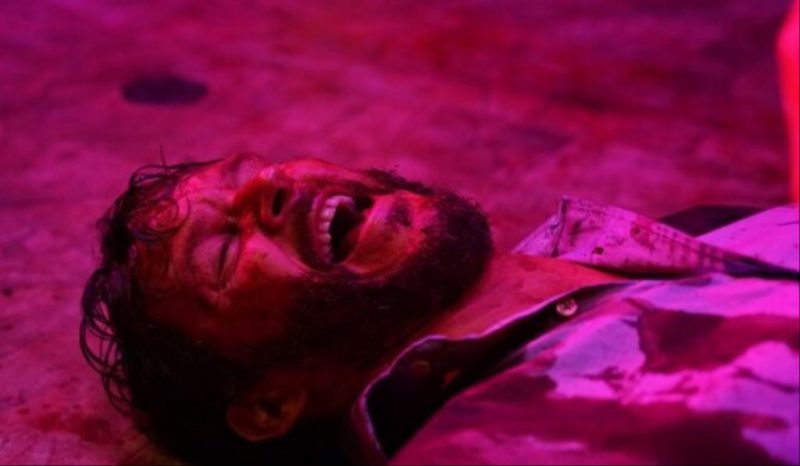 “The universe has a favor to ask”
Glorious is a 2022 American horror film about a man who finds himself in an isolated bathroom with a mysterious figure.

Ground:
After a breakup, Wes finds himself at a remote rest stop. He finds himself locked in the bathroom with a mysterious figure speaking from an adjacent cubicle. Soon, Wes realizes that he is involved in a more terrible situation than he could imagine…

Comments:
“An excellent cast, stellar camerawork, and biting splatstick sense of humor make this a surprising new entry into one-location horror. There is too much restraint regarding its main character, which undermines the punchline a bit. Still, it’s a quick-and-dirty tale of cosmic karma that’ll likely leave you squirming, gritting, and cackling in equal measure. 3 out of 5, Bloody disgusting

“The script manages to take an outrageous idea and make it human while delivering the messy delights that fans of films of this nature crave. Globally, Glorious is a great cosmic horror film that tackles heavy themes while being the over-the-top monster movie that many audience members need right now. RBC

“There’s a lot to love Glorious, and while it won’t set the world on fire, it mixes comedy, drama and cosmic horror in a unique and innovative way. For fans of the genre, and even for people who aren’t fans of horror or sci-fi, Ryan Kwanten and JK Simmons’ performances and unique concept make Glorious worthy of your attention. 7 out of 10, CGM Backlot

“Flashbacks are well used to contextualize it and hook viewers. Wes is drawn to his situation by fate, which could play into larger issues of existentialism, though not explored much beyond inference. Instead, viewers are given the context and effects that are sweet enough (and bloody) to drive things home. web movie

“…as much as the film fills our thoughts with contemplations of issues ranging from the mundane to earthly destruction, the minimalist style of certain scenes shows how McKendry does not want doomsday threats to override the ongoing conversation. Most of the film may involve a guy and a disembodied voice talking in a bathroom, but the ending lets it all get bloody and offers a few surprises as well. Nightmarish conjurations

“The best horror filmmakers appreciate the balance between excess and restraint; knowing how far to push the genre while ensuring the story stays grounded enough to keep an audience firmly hooked. With GloriousRebekah McKendry (Psycho Granny) finds that sweet spot, exploring the thematic and visual boundaries of metaphysical narrative…” Daily screen

Exit:
Glorious had its world premiere at Fantasia Festival in Canada ahead of an on-demand (VOD) release on August 18, 2022. It will also be on Shudder.

MOVIES and MANIA is a truly independent website and we rely solely on minor revenue from internet advertisements to stay online and grow. Please support us by not blocking ads. Thanks. As an Amazon Associate, the owner occasionally earns a very small amount from qualifying related purchases.