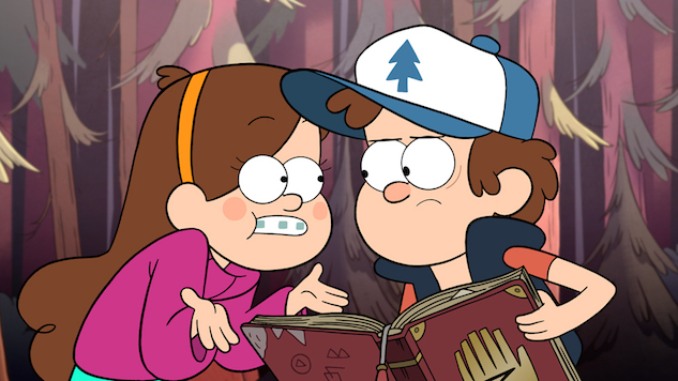 The term “Disney cartoon” conjures up many images: a smiling, ginger-haired mouse whistling down the street. A pale, dark-haired princess sleeping in a metaphor-laden glass box. A strangely warm princely lion leaping through a rippling jungle. A pale, whiteprincess with hair girdling her loneliness from the top of a glacier laden with metaphors. Happy forever? It’s a Disney cartoon. Healthy family ties? It’s a Disney cartoon. Harsh but adorably marketable lessons on growing up? This, perhaps more than anything else, is a Disney cartoon!

But the hunt for cryptids? Supernatural plot mapping? Scam geezers? Cosmic (and/or demonic) body horror? If you were to go out and interview a hundred random people you found on the street, you’d be hard pressed to find even one person offering images like this when asked to describe what what she thinks of when she thinks of a “Disney cartoon”. .”

And yet, since Gravity Falls debuted on the Disney Channel a decade ago, delivering twins Dipper and Mabel Pines (Jason Ritter and Kristen Schaal, respectively) to their great-uncle’s (Alex Hirsch) tourist trap in the paranormally active forest just outside Outside of Gravity Falls, Oregon, each of these things has become a Disney cartoon staple. Plus, so does the series’ long-running storytelling, rambunctious and eerie characterization, and cheerful willingness to simply be raw. When you’re queuing up for a Disney Animated Original Series on your Disney+ app these days, you’re also likely to find a chaos demon protagonist making a sorcerer, bone-biting flim-flam artist and anarchist mentor than finding an eccentric, modern, rebellious Disney princess who adventures between made-for-TV musical numbers – and it’s all thanks to these quirky twins who pursue Bigfoot and investigate cosmic mysteries. in the fictional paranormal woods of cartoonist Alex Hirsch’s chaotic imagination.

Before we get to Disney Channel’s self-segmented witches today, let’s backtrack. While many of us have enthusiastically followed Disney’s linear spiral into a deeply unsettling, often occult, existential weirdness since Gravity Falls took its final bow, there’s still an animation-loving segment of the population that has only passing familiarity with Hirsch’s short-lived mystery series, not to mention the huge (and extremely weird) animated swings that are become his Disney Channel legacy. To these people, I say, give this primer of Dough editor Garrett Martin a quick analysis. If you are not swayed by his description of Gravity Falls– which only lasted two seasons (36 episodes) before yielding the chaotic multidimensional ground to battles for good in the face of the monster genocides, amphibian wars and demonic fascism that would soon follow – as a “fleeting beauty [that] conjures up thoughts of BoJack Rider, Bob’s Burgers, adventure timeand rick and mortynot to mention live-action inspirations such as twin peaks, X filesand Lostthen there’s unlikely to be much for you here in the rest of this retrospective.

For everyone else, though, I invite you to take Garrett’s summary of Gravity Falls‘ as resulting from “its focus on family relationships both healthy and broken, its heady blend of sci-fi, horror, humorous pop culture references and deep emotion, even its central and ever-looming truth (summer is ending)” as something like the gospel. I mean, Disney Channel certainly did: where Hirsch laid the groundwork for shaggy animated worlds constructed of ideologically gray complexity and endless paranormal impossibility, creators like Daron Nefcy (star vs the forces of evil), Matt Braly (amphibians) and Dana Terrace (The owl house) have built palaces of skulls, tadpoles, and laser pups. Where Hirsch made room for nuanced storytelling about found family, coded queer and otherwise, Nefcy, Braly and Terrace (among others) filled it in with the kind of relationships kids who grew up on a frustrated diet of Kim Possible versus Shego could hardly have dreamed of. And where Hirsch said, Yeah! Sure! Let’s give these kids a stable of presumably eccentric and/or emotionally damaged adults to sympathize with on extremely adult issues! said his future colleagues, GREAT; HERE IS.

That said, however Gravity Falls opened up a lot of weird ground for linear Disney programming, it wasn’t the first non-Disney oddball on the Disney Channel/Disney XD block, with Fish hooks having launched its short and strange run in 2010 and Phineas and Ferb it’s much longer, even weirder in 2007. But where Fish hooks and Phineas and Ferb set the stage for Disney XD and Disney Channel to break free from the more innocuous “Disney cartoon” image of the big screen, it’s hard to argue with the ostensibly odd legacy Gravity Falls, more precisely, left behind. I mean, where the fun summer adventures Dipper and Mabel had in Gravity Falls eventually transformed into cosmic villain Bill Cipher manifesting the kinds of monsters that are *adult* nightmare fuel, with whom the Pines family (and friends) had to fight for the very existence of the universe, star vs the forces of evil went two steps further, not only with a protagonist it was a nightmarish disembodied My little Pony head, but also send Star and Marco (and, when she had time between parties, the aforementioned Princess Pony Head) to spend their time early in the series tearing down a misogynistic, anti-trans princess prison from the inside. , and at the end of it, waging a war against blood monarchies and xenophobic genocide. The owl housemeanwhile – which has taken the “nightmare fuel” gamble so far that it’s set in a world literally out of the the blood and bones of a giant demon– took as its central battle that of freedom against magical (but again, literal!) fascism.

I mean, the interval! And even where questions as capricious as “how to stop generational trauma” and “shouldn’t we perhaps do genocide/fascism” aren’t such a central conceit for others Gravity Falls successors—your Big City Greensyour take a walk theres, your The Ghost and Molly McGees-the drive to get big and weird and even, often, not so likable.

It’s good! I mean, kids As weird, a fact that Cartoon Network, Nickelodeon, and Kids’ WB (RIP…ish) have known well for ages.

This, of course, makes news like The owl housePremature cancellation all the more frustrating. Of all the Disney Channel original animated series that thrived in fertile soil Gravity Falls broke ten years ago, The owl house was not only the most aesthetically ambitious, but also the most groundbreaking, with its clumsy teenage protagonist, Luz Noceda, a proudly bisexual and neurodivergent Dominican-American girl with whom Mabel and Dipper Pines would die to be best friends. Not to rely too much on the cliché, but the Pines twins walked (or at least stumbled headlong) so that characters like Luz Noceda could run.

Yet the thing about legacy in pop culture is that once you’ve established it, it’s hard to root it. So here are the cranks and the counters and the curses and the cryptids that, thanks to Gravity Falls, have made the “Disney cartoon” designation so much more interesting than it has been canonically. May your righteous anger against classism, fascism, and bigotry of all types linger in cultural memory, may Disney Channel itself keep up the courage to make room for you. It’s been a fun decade.

Gravity Falls (along with all of the other bizarre Disney cartoons listed above) is streaming on Disney+.


Alexis Gunderson is a television critic and audio bibliophile. She can be found @AlexisKG.