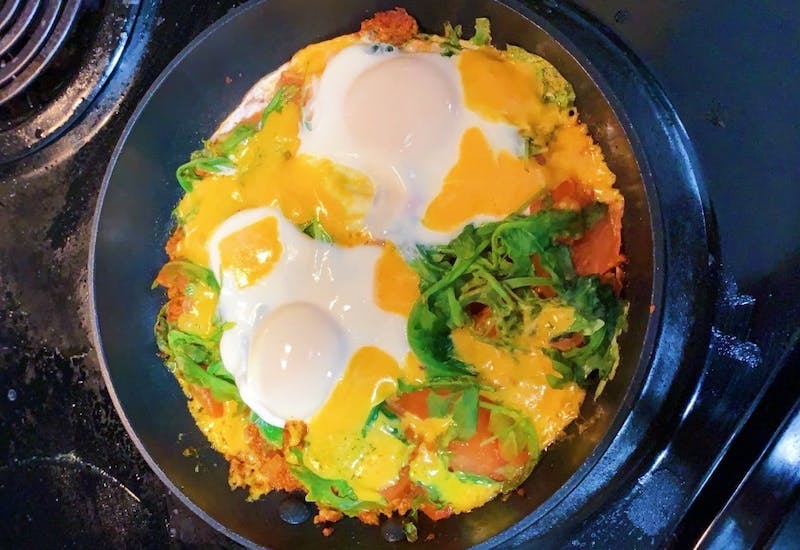 Shakshuka originated in North Africa – the former Ottoman Empire and specifically Tunisia – after tomatoes were introduced to the region through the Colombian exchange. When immigration between Israel and North African countries was high and immigrants suffered financially, the hearty and affordable Shakshuka quickly became a staple. Not only was this dish an affordable option, but it was also extremely easy to prepare. Shakshuka translates to “mixed” which reflects how the dish is prepared. It’s basically poached eggs cooked in a tomato stew with vegetables and other spices tossed into a saucepan, which is then cooked over low heat until it reaches the desired consistency.

I first discovered Shakshuka last fall at a cafe called Tatte Bakery & Café in Washington, DC and since then Shakshuka has become one of my favorite dishes to make – I even bought a pin in “shakshuka” enamel. Tatte was founded by Tzurit Or, a self-taught pastry chef who grew up in Israel. Her Jewish roots and the popularity of shakshuka in Israel probably inspired her to add this delicious dish to the menu.

It is very popular in the Middle East and you will find many variations of it in Israel and Egypt. It was known that Jewish citizens living in the Ottoman Maghreb would make a vegetarian variant of the dish while Tunisian Jews would make the spicy version with eggs. Personally, I like to use eggs in my Shakshuka as it adds a heartier aspect to the dish.

The feta cheese adds the perfect amount of sharpness to the otherwise fresh taste of the tomato and other vegetables. Last time I made this dish, I also added vegan ground beef – made with soy – which added a meaty texture, which I personally enjoy. This authentic dish is not only healthy and hearty, but it’s also a dish full of spices and flavors bursting with every bite.

A good side that goes well with Shakshuka is pita bread, which is also native to the Middle East and the Mediterranean. Some other recommended sides that go well with Shakshuka are red pepper hummus, roasted cauliflower hummus, and carrot and turmeric hummus! Whether or not you decide to include these sides, this dish will be perfect for the cold season and a great way to start your day as a traditional breakfast. So hurry to your kitchen to whip up this simple one skillet dish, perfect for a hot and hearty breakfast or brunch.