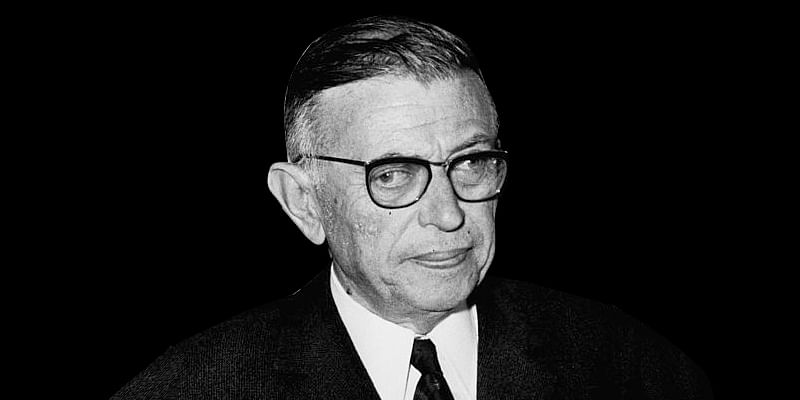 Jean-Paul Sartre on existentialism and freedom

“Being is. Being is in itself. Being is what it is.”

Jean-Paul Charles Aymard Sartre is one of the most important philosophers of all time. Although his work has garnered considerable resonance over the years, his theories of existentialism and freedom cement his place among the most influential Western philosophers of the 20th century and beyond.

Born in Paris on June 21, 1905, Sartre’s early work focused on the themes of existentialism illustrated by his first novel Nausea and later the test Existentialism and humanism. After spending nine months as a German prisoner of war in 1940, Jean-Paul Sartre began to explore the meaning of freedom and free will and in 1940 he wrote his main philosophical work – Being and Nothingness: a phenomenological essay on ontology. Today, on the occasion of Sartre’s 112th birthday, we take a look at some of the key aspects of his philosophical contemplations.

The anguish of freedom

“Man is doomed to be free, because once cast into the world, he is responsible for everything he does.”

Jean-Paul Sartre believed that human beings live in constant anguish, not only because life is miserable, but because we are “condemned to be free”. While the circumstances of our birth and upbringing are beyond our control, he explains that once we become aware of ourselves (and we all eventually do), we have to make choices – choices that define our very “essence”. Sartre’s theory of existentialism asserts that “existence precedes essence” it is only by existing and acting in a certain way that we make sense of our lives. According to him, there is no fixed conception of how a human being should be and no God to give us a purpose. Therefore, the responsibility for defining ourselves and, by extension, humanity, lies entirely with us. This absence of a predefined finality and an “absurd” existence which offers us infinite choices, is what Sartre attributes to “the anguish of freedom”. Having nothing to restrict us, we have the choice to take action to become who we want to be and lead the life we ​​want to live. According to Sartre, every choice we make defines us while revealing to us what we think a human being should be. And this incredible burden of responsibility that the free man must bear is what relegates him to constant anguish.

“Everything has been understood, except how to live.”

Jean-Paul Sartre denounced the idea of ​​living without seeking freedom. The phenomenon of people accepting that things have to be a certain way, and subsequently refusing to recognize or seek other options, was what he called “living in bad faith.” According to Sartre, people who convince themselves that they to have to do a particular job or live in a particular city and live in bad faith. In Being and Nothingness, Sartre’s famous speech on phenomenology ontology, he explains the notion of bad faith through the example of a server so immersed in his profession that he sees himself first and foremost as a server rather than a free human being. This waiter is so convinced that his current job is all he can do, that’s all he can do. supposed do, that he never considers the option of doing anything else in life. Sartre believed that we are alone responsible for all that we really are, and by not exploring the myriad possibilities that life offers us, we alone are responsible for restricting our freedom. “We are left alone without an excuse,” he said.

Rage against the machine

A fervent supporter of the Marxist school of thought, Jean-Paul Sartre praised money as the only factor that restricts a person’s freedom. The need for money, he explained, is the excuse people give themselves when they reject the idea of ​​exploring unconventional life choices. Society’s acquiescence to money infuriated Sartre, and capitalism was the political system he blamed for the phenomenon. He compared capitalism to a machine that traps people in a work cycle they don’t like so they can buy things they don’t need. This necessity for material things, he argued, did not exist in reality, but was rather a human construction that led people to deny their freedom and to view life in another way as reckless. Sartre was a vocal opponent of capitalism and participated in several Parisian demonstrations in 1968 against the system. As a Marxist he greatly admired Fidel Castro and Che Guevara, both of whom were fiercely opposed to capitalism and established a communist state in their respective countries.

“We don’t know what we want and yet we are responsible for what we are – it is the fact.”

Ultimately, Sartre was a humanist who wanted us to break free from our shackles and reach our enormous potential. He wanted us to recognize our freedom, not to be limited by the popular definition of reality, and to live life as we wanted to live it. And while people have discovered several flaws in the way he presented his ideals, his ideals themselves are certainly worth considering.

God’s response to Nietzsche, the philosophy of Søren Kierkegaard.

Why did Jean Paul Sartre become a believer before his death?