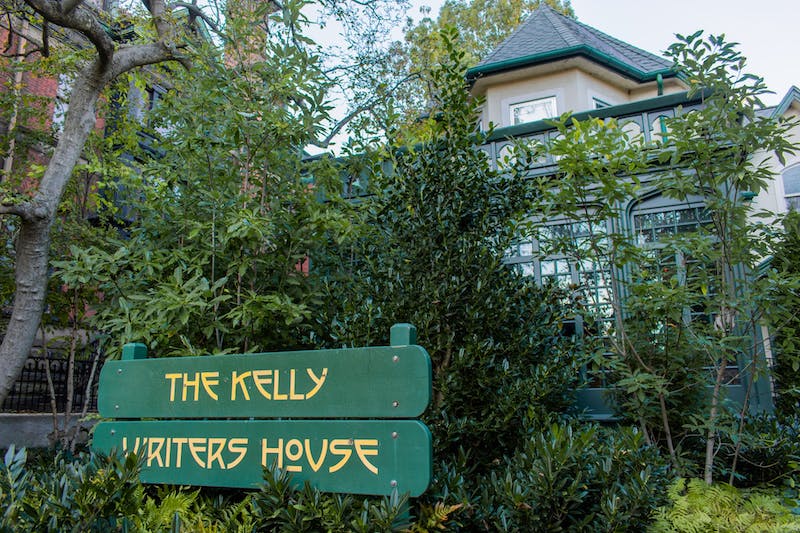 Poet Jerome Rothenberg visited the Kelly Writers House on September 29 to read poems from his most recent book, “In the Shadow of a Mad King.”

A mix of Penn’s Philadelphia students, faculty and community members gathered Thursday night at the Kelly Writers House to watch the reading. Additionally, the KWH community celebrated Rothenberg’s 90th birthday at the event and recognized Rothenberg for his contributions to the literary community.

Rothenberg is an internationally renowned poet, translator, anthologist and performer. “In the Shadow of a Mad King” reflects on contemporary leadership and is the newest addition to more than 90 books he has published.

Professor Penn English and KWH Faculty Director Al Filreis welcomed Rothenberg, acknowledging his contributions to the literary community and reading a quote from his book – Pre-Faces & Other Writings – on the importance of hearing poetry.

“In the poetry of our time, with its use of approximate and highly individualized notation, a poem’s meter (and much of its meaning) is equally clear only when pronounced: in this case , sounded by its author, ” Filreis read aloud.

Throughout his decades-long career, Rothenberg strove to perpetuate the oral and written literary legacy of the vanishing world in modern literature. He drew inspiration from many global cultural movements, including Dadaism, North American Indian culture, Japanese literature, and personal ties to the Jewish community. He is also well known for his work in ethnopoetics, a field that combines poetry, linguistics, anthropology and ethnology.

“Jerry writes in all forms. He cares about other poets, about the poetic community,” Filreis said. “He cares about his own European origins and the importance of European modernism. And he brings out all these interesting concerns in poetry.

From ‘To Dream Infinity’ to ‘Coda’, the poems recited by Rothenberg hone in on a theme of various authoritarian figures in society past and present, exposing the world of deception and manipulation that surrounds our world’s rulers. . Accompanied by illustrations by his granddaughter Sadie Rothenberg, his poems aimed to take listeners on a journey into the mind and operations of a mad king.

Audience members, like Lila Shermeta, a sophomore at the College, said the images and metaphors grabbed them.

Shermeta – who is also a staff member of Under the Button – first heard of Rothenberg through the modern poetry class and said she loved hearing his poems in person. Her favorite poem of the evening was “Times are never good”.

“It was like [the poem] everything rekindled when he read about existentialism, fear and failing democracies. And he brought it back to how we have this anxiety inside of ourselves, but it doesn’t really matter too much because you’re here, and so am I,” Shermeta said.

Receive our newsletter, The Daily Pennsylvaniandelivered to your inbox every weekday morning.

KWH was founded in 1995 to serve as a home for Penn and Philadelphia writers and runs dozens of programs and projects each semester.

Filreis said KWH has been hosting poetry events since its founding because poetry is at the heart of everything KWH and its writers do.

“Poetry is the only form of writing that is almost always more concerned with the ‘how’ than the ‘what’. Poetry is only interesting in the way it says what it says… The idea of ​​a poem is to encounter a way of saying something and this way is difficult, complicated, open. And that’s why we’re going back,” Filreis said.

Where are we? The problem of body, brain and soul

Why Biden thinks he needs a new Cold War