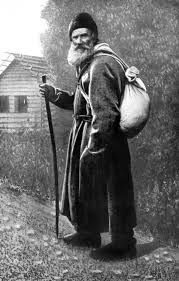 Leo Tolstoy died on that day, November 20, 1910. He is one of those complicated, difficult, yet shining figures of what one might call the hard light of the divine.

In his Confession and other religious writings, it offers something that I found an absolute delight. It is a kind of mixture of Christian and Buddhist wisdom. At least as I read it…

“There is an old oriental fable about a traveler caught off guard in the steppes by a ferocious wild animal. To escape the beast, the traveler hides in an empty well, but at the bottom of the well he sees a dragon, its mouth open, ready to devour him.

“The poor man doesn’t dare to come out of it because he’s afraid of being eaten by the rapacious beast, nor does he dare to fall to the bottom of the well for fear of being eaten by the dragon. So he grabs a branch of a shrub that grows in the crevices of the well and clings to it. His arms are weakening and he knows that he will soon have to resign himself to the death that awaits him on both sides. Yet he still clings, and as he clings to the branch, he looks around and sees that two mice, one black and one white, are constantly circling around the bush he is hanging from, gnawing at it.

“Sooner or later they will eat it and the branch will break and it will fall into the dragon’s mouth. The traveler sees it and knows that it will inevitably perish. But while still hanging there, he sees drops of honey on the leaves of the bush, stick out my tongue and lick them, so I cling to the tree of life, knowing full well that the dragon of death inevitably awaits me, ready to tear me to pieces, and I do not understand not how I fell into this torment. And I try to lick the honey that once comforted me, but it no longer gives me pleasure.

“The white mouse and the black mouse – day and night – gnaw the branch on which I hang. I see the dragon clearly, and the honey no longer tastes sweet. I can only see one thing; the inevitable dragon and mice, and I can’t take my eyes off them. And this is not a fable but the truth, the truth which is irrefutable and intelligible to everyone.

“The delirium of the joys of life that had once stifled my fear of the dragon no longer deceived me. No matter how many times I’m told: you can’t understand the meaning of life, don’t think about it but live, I can’t do it because I’ve already done it too long. Now I can’t help seeing day and night pursue me and lead me to death. That’s all I can see because that’s the only truth. Everything else is a lie.

“Those two drops of honey, which more than anything had diverted my eyes from the cruel truth, my love for my family and for my writing, which I called art, I no longer found sweet.”

Perhaps you know this story at least in outline as a traditional Buddhist parable. Tolstoy’s source was the story of Barlaam and Jehoshaphat, an ancient and highly regarded hagiography with numerous versions, accounts and adaptations in various languages.

What Tolstoy doesn’t say, and perhaps didn’t know, is that the whole legend of Barlaam and Jehoshaphat is a delightful blend of Buddhist and Christian teachings tied to a heavily Christianized version of the Buddha’s life.

I don’t know exactly why, but all of this makes me happy…