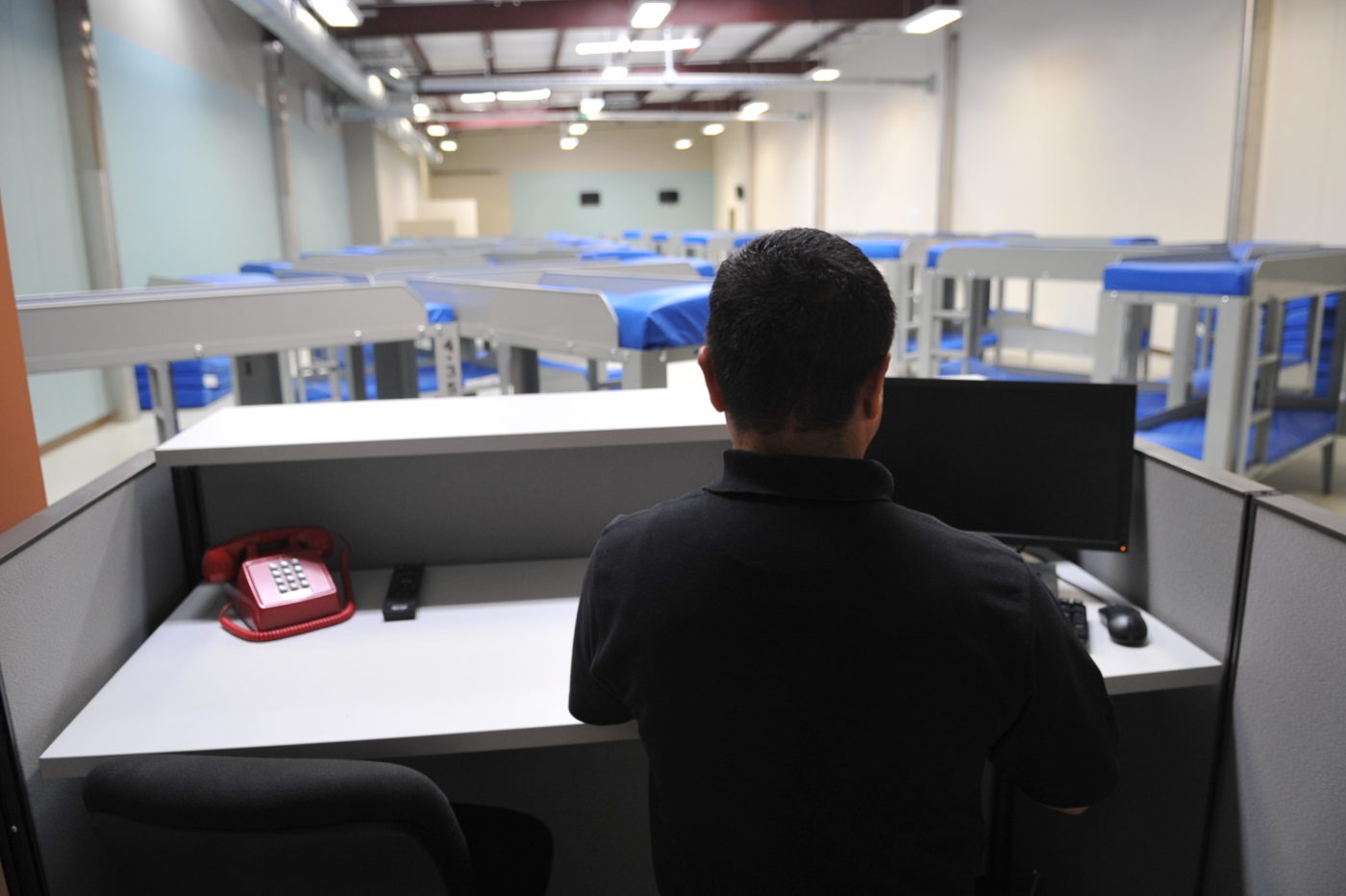 Ten years later, in 2020, as a pandemic took hold, Oyola began hearing from detained immigrants about the virus. In June, ICE transferred 74 people from detention centers in Arizona and Florida to ICA Farmville, 51 of whom were infected with the virus. ICE said the transfers were necessary to avoid overcrowding at other facilities.

By July, nearly all Farmville inmates, 259 out of 298 people, had contracted COVID-19. Fifteen inmates have since sued the ICA and ICE for failing to provide security and medical care. Inmates told the court about the overcrowded conditions of up to 80 people in a dormitory. Several said that when they protested, they were placed in “the hole,” or solitary confinement cells; one person said he was pepper sprayed in the face. On August 6, an infected man, a 72-year-old Canadian national named James Thomas Hill, died.

At a town council meeting, ICA Farmville superintendent Jeff Crawford said, “We understand that the inmates’ claims sound horrific, but I can tell you that I have been present at the facility the entire throughout the ordeal, and it was not a disaster. situation.” Crawford did not respond to interview requests for this story.

Federal District Judge Leonie Brinkema, however, said she was troubled by the conditions and “bureaucratic circus” that exposed inmates to COVID-19. She halted transfers to ICA Farmville.

A few months after the injunction, while inmates were being evicted or released, the facility had fewer than 150 inmates. In November 2021, 16 months after the COVID-19 outbreak, the number of detainees fell to less than 15.

By this time, Oyola had spent a decade helping build coalitions in central Virginia. He co-founded the Anarchist People of Color Collective and shared a duplex for several years with other organizers in 10th & Page, a historically black neighborhood in Charlottesville.

In 2018, Oyola joined the Legal Aid Justice Center of Charlottesville as an immigrant rights organizer. It’s a job that brought him back to Farmville, including in the summer of 2021 when he spoke at Farmville board meetings. With so few inmates, he argued, it made sense to close the detention center, which the city can do by terminating its contract with 60 days’ notice.

Others convened council meetings, trying to express their feelings in three minutes to crackling sound. During a June 2021 session, a woman named Angelina said she had been fighting for the center to be closed since her husband was detained there in 2018. Then a man named Augusto, who summoned the council meeting from Maryland, said in Spanish that being detained and separated from his family traumatized him.

The recorded voice of a detained person speaking in Spanish was also shared: “We ask you to hear our voices. Please we have young children who need us. We have already survived wars, a pandemic and now we are so sick physically and mentally here.

Last September, three ICA employees, Farmville residents themselves, told council members that the inmates’ accounts were not accurate. ICA employee Krystal Dagner said those detained are kept in good conditions with constant medical care, food and services, communications and recreation. “We provide a safe environment that houses adult males who ICE has determined are necessary for detention while they navigate the immigration process,” she said.

An ICE spokesperson said in an email that its policy is not to comment on pending litigation and not to answer questions about ICA Farmville. Internal audits by Homeland Security and ICE rarely found problems with the management of the facility. However, last year the US Government Accountability Office, which conducts assessments on behalf of Congress, said ICE should improve the independence of those who conduct oversight and that the agency keeps records. incomplete problems in the facilities. The report says three-way contracts with local governments, called Intergovernmental Service Agreements or IGSAs, are how most immigrant detainees end up in the custody of private companies. In April, the National Immigrant Justice Center, along with four detainees, sued ICE and Clay County, Indiana, for taking advantage of their detention center.

The ICA continues to receive more than $2 million each month from ICE to run the Farmville Detention Center, despite having at most 13 people in its custody at any one time this year. Farmville receives about $15,000 a month from ICE, $1 for a minimum of 500 inmates a day, under the tripartite agreement with the ICA. In 2021, Farmville had a budget of $22 million.

Farmville Mayor David Whitus and several city council members did not respond to interview requests. The city manager provided recordings of financial transactions and communications, but did not respond to questions about the content provided.

But Brian Vicent, who was elected to city council in 2018, said he didn’t have a ‘hard and fast answer’ on whether the city should pursue its deal with the ICA and ICE. . Most of the comments they’ve received are from out of town, he said.

“I think the installation issue is a much bigger issue than Farmville,” he said. “Immigration and the private prison industrial complex are bigger issues than our locality. People would be better served by approaching the federal government and Congress.

Whitus announced in March that he would not run again in November. Vincent is a candidate for the position.

Vincent added via text: “Please implore people you know who want to come here to this country to take the legal route to citizenship.”

It is not always the case that detainees in immigration detention have broken a law. Immigrants in detention often have never been convicted of crimes or have already served sentences handed down by judges. While awaiting the outcome of their case, they are placed in “civil detention”, not as a punishment.

Overall, immigration detention nationwide has dropped sharply because fewer people are coming to the United States and because of policy changes, including a challenged federal health order from the United States. era of the pandemic called Title 42 which allows border officials to refuse asylum seekers at US land borders. In the summer of 2019, more than 50,000 people were detained on average every day. In February 2021, a month after Biden took office, that number fell to less than 10,000. While most detention centers have seen a decrease in their prison population, none that continue to operate have seen a drop as dramatic as ICA Farmville.

Biden’s 2023 budget proposes to cut funding for migrant detention by 9,000 beds, to 25,000 beds in total, closer to the number of people currently detained daily. In March, a Reuters investigation found that ICE was ending, suspending or reducing its use of four prisons in Alabama, Florida, North Carolina and Louisiana. García Hernández, the aforementioned Ohio State University law professor, said it’s striking that these four facilities were chosen due to poor conditions. “Symbolically, it is significant. It sends the message that there is a change,” he said.

But there is also no political indication, García Hernández said, that the Biden administration will stop detaining so many people.

Tim Keller and the Evangelical Elite: Where Are Their Minds?