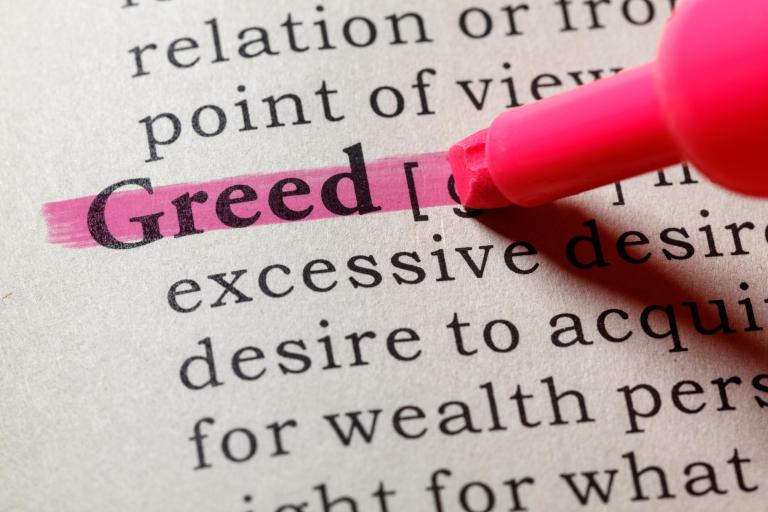 Moral Decision Making and the Fear of the Lord: Part 3 – The Love of Money

In this series, I look at some common starting points for making moral decisions. These starting points, while common, are not good starting points. Rather, they are starting points that themselves are immoral or irrational in some way. Because they are either immoral or irrational, they cannot lead to moral or rational ends. In the previous two articles, I have highlighted the issues of starting a moral decision-making process from a place of fear and a place of fraud or deception. Now, I will consider acting in the hope of personal gain or, as Alasdair MacIntyre puts it, “bribery” (although I am not taking bribery in a strictly legal sense here).

In other words, what problems do we face if we begin a moral deliberation with the accumulation of excessive money as a starting point?

Acting out of personal gain (corruption)

You cannot love both God and mammon. It was said with authority by, well, by God! Jesus’ own words, recorded in the Gospel of Matthew (6:24), tell us that no one can serve both God and Mammon. One of Jesus’ early disciples was inspired to write the same true statement in this way, “the love of money is the root of all evil” (1 Tim 6:10). This shows a wonderful congruence between Paul and Jesus, a congruence that some Christians attempt to break (usually regarding sexual morality).

The historical record is of course replete with man’s greed for material wealth and voracious appetite for monetary gain. Nations have literally risen and fallen as their rulers have fallen, just as local communities have suffered from corruption in their state and county governments. Households are also collapsing, as the thirst for money and luxury drives families to extremes that enslave them to the act of “making money”. Athletes and movie stars are also known for their insatiable thirst for money and luxury. Considering what athletes and actors actually do, the fact that they get paid so well is still something that boggles my mind!

However, it is not the money itself that is bad. It is rather the disordered love of wealth which, taken as a moral starting point, leads to all kinds of evil. This love of money corrupts all aspirations to moral good. This is regardless of whether it is written in a religious context, for example, the Borgia Papacy or today’s Prosperity Gospel, or in a secular context, for example, political cronyism or corruption of the Marlet. Christians should not be afraid to make money, even a lot of money, provided the desire is properly ordered. This means that when it comes to moral deliberations, making or keeping money is not a primary concern or ultimate goal. Money in the hands of the wise can produce all kinds of social and even spiritual goods. Wealth held by the righteous steward can serve many of God’s purposes on earth.

The Love of Money in the Church

The love of money in the church, however, is a special kind of atrocity. Throughout its history, silver has ruined many congregations. In Luther’s time, the doctrine was abused in an effort to send wealth to Rome for the construction of St. Peter’s Cathedral. While God ultimately used the abuse of indulgences to motivate a young Luther to nail his reformist theses to Wittenberg’s door, the damage to human souls was nonetheless real. Moreover, the manipulation of doctrine was tragic to the life and reputation of God’s Church, an ignominy that still resonates today.

More recently, what was once a hidden sin in many Protestant churches (pastoral love of money), has been unashamedly made explicit by “prosperity” and “health and wealth” preachers, men and women who preach a false christ. It is a Christ who enters the world not to suffer and die for the sins of humanity, but who pays the debt of sinners so that they can enrich themselves materially. It is a vile corruption of religion that not only pervades the American landscape but dominates many parts of Africa, South America and Asia, where the materially poor fall prey to Mammon’s lie.

In his incisive book, The Subversion of Christianity, Jaques Ellul highlights the power of Mammon, which he considers to be one of the six main “powers and principalities” of which the Bible speaks (the others are: the prince of the world, the prince of lies, Satan, the devil , And the dead ). Of the first “power”, Mammon, Ellul says:

Mammon is money which imposes itself as a law of relationship: exchange, purchase and sale, nothing for nothing, everything to buy and sell. This is wholly and totally contrary to grace…. The spirit of it made its way into the church, where sometimes grace was put up for sale [like Tetzel’s indulgences]or the church has become a center of robbery and personal enrichment, or… it is so obsessed with its financial problems that all its other concerns and functions take a back seat.

This last form of Mammon’s love may seem less harmful, but it is almost the status quo for many mainline churches, especially in Europe today. In short, the obsession with money becomes the medium through which we interact as human beings. Because an exchange is necessary, money works against grace.

As I have pointed out with fear and deceit, however, money should not be seen as a mere material good that attracts men. Ellul clarifies that when Christ speaks of Mammon, he is not just referring to the coinage of ancient Rome. It speaks of a spiritual power, of a demonic reality.

But what we see here is not just the world of money itself or our subjective desire for it. It is verily a demonic power which has given money the ability to change all that should be free and open grace into bitter conquest, possession and obsession.

The problem of money is closely related to the spiritual status of human beings. The powers and principalities Paul speaks of in his letter to the Ephesians are not friends of God’s singing fulfillment. Mammon’s power causes us to overvalue the act of “having” as opposed to the state of “being.” If we focus on possessing aspects of God’s creation rather than relating to them, then we surrender to the spirit of Mammon.

To confuse owning and being inevitably comes down to the one who owns. By seeking to possess or possess something, we gradually become possessed or possessed by the things we seek to cling to. Commenting on the work of the Catholic existentialist Gabriel Marcel, FH Heinemann puts it this way:

The things we own, the houses, the books, the factories, the gardens, or the ideas and opinions that we consider our “possessions”, “own” us in a specific sense. We risk being imprisoned or devoured by them. People who focus on havingness risk becoming captive souls cut off from others and not responding to their “presence”.

The spirit of Mammon can cause us to equate our value, our identity, with what we have or with the quantity that we have. In doing so, it causes us to forget, deny or suppress the source of our true value, namely God himself. Once this happens, we lose sight of the fact that we are first and foremost created in the image of God, seeing our image instead as dependent on Mammon. And so Mammon possesses us now, enslaving us to his evil will. For this reason, when Jesus says we cannot serve both God and mammon, he is referring to mammon in terms of a master-slave relationship. Either we are servants of God’s will or we are slaves of Mammon. The choice is ours.

Conclusion: The Fear of the Lord, Not the Love of Mammon, Should Guide Us

There are many practical concerns about money. And while any good steward of the material wealth that God allows us to have will take this into consideration, to begin with money or comfort, for the impetus for moral decision-making is to start from a place of inherent sin. The fear of the Lord and the love of money (or the fear of having no money) are, as Jesus warned us, mutually incompatible orientations of the will. If the latter takes precedence over the former, only evil can ensue. In the next post, I will examine the last (false) starting point of moral decision-making, namely seduction.