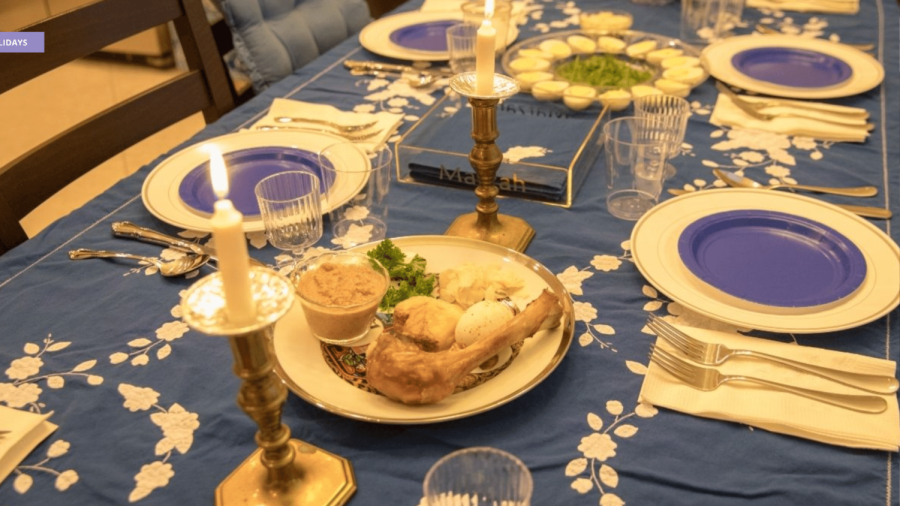 Passover was March 30 the first year I celebrated it. I remember it was a stormy spring in Los Angeles. Rainwater roared through the city’s aqueducts. I had never seen so much rain in Southern California before. Everything seemed to move in slow motion, and everything seemed so vibrant and clear – grief has a way of turning the most mundane sights into something memorable.

What was really memorable for me was Passover – the Seder plate and Elijah’s cup were so beautiful in shape and meaning. My boyfriend, Tuvia, and his family took care of me after my mother died. Despite the grief, I helped Tuvia’s mother put together the Seder plate. She explained symbolic foods to me and kept grabbing my face to tell me she loved me. “Ah! I love you Mameleh. It wasn’t easy to smile, but I tried. I helped Tuvia’s dad make the salmon croquettes and minced liver – those were also the two foods we made when I was a kid. Tuvia’s sister was in charge of the matzoh balls. She rolled each meatball carefully and placed them in the chicken broth to simmer. I poured the pot of gefilte fish into pretty flowery bowls. It was a different brand of gefilte fish than my grandmother ate, but it looked and smelled much the same – gelatinous and fishy.

It was 1991. I was only two months away from my 20s.and year my mother died. Her death seemed sudden, even though she had been sick since I was in third grade. First, she had a stroke under anesthesia for an umbilical hernia. After that, there were more strokes and grand mal seizures. Then in 1985, she was diagnosed with breast cancer. His cancer loomed over my high school years like a dark shadow.

Again, that wasn’t the only darkness I had to deal with. My high school was located in a small rural town in the Upper Midwest. The people of this small town could never be described as friendly, especially to those they considered strangers. My family was made up of swarthy foreigners with thick accents – there was little or no chance of fitting in.

Perhaps the most appalling thing for our neighbors was that we didn’t go to church. I was harassed almost daily on the school bus for this offence. The children of the faithful were especially cruel. They told me that AIDS was my fault because I was not a believer and that I would be punished at the end of days. The tone of their words was so hateful that I shudder to think about it for too long. They wished my family and I would all catch AIDS and burn in hell. For this reason, I still cringe whenever I hear the phrase “Minnesota Nice”.

However, their favorite insult was to call me ugly. The inhabitants of the city were all of Nordic, Germanic and Finnish origin. They said my dark brown eyes reminded them of shit. My darkest brown hair reminded them of horsehair. My hourglass figure seemed to enrage everyone, girls and boys. An overly feminine waist-to-hip ratio in a very masculine part of the country. My big aquiline nose was an ugly witch’s nose, of course—originality was never a priority in the country. One boy in particular liked to sit in the seat before mine and call me ugly until school, which was almost a two-hour bus ride. This is how I started most of my school days in a small American town.

One night while watching late night TV with my dad, a Woody Allen movie played on one of three channels we were able to access with rabbit ear antennae. My dad said Woody Allen was a naughty Jew. I noticed that Woody and I had a few characteristics in common – the same characteristics the kids at school teased me about. Meanwhile, I didn’t think Woody Allen was ugly – his big puppy eyes completely won me over. And he was smart. I had never heard anyone, except my family, talk about famous composers: Beethoven, Schumann, Mozart, Russian literature and the philosophers of existentialism before. There were no boys in rural Minnesota like Woody, I was sure. I decided to stick with boys, until I found one like him. When I told my mom I had a crush on Woody Allen, she looked worried. This was long before he became a controversial figure. His concerns came from a deeper place.

My mother didn’t want me to associate with Jews. It was easy to accomplish when we lived in Two Inlets, Minnesota, but not so easy when we moved to Los Angeles. My father was given an apartment in the La Brea Towers as an art studio by his long-time employer – prominent businessman and art collector Louis Warschaw. I found a job at the bookstore closest to the Farmer’s Market on the 3rdrd and Fairfax Ave. I spent the whole day with the Jews of this very Jewish neighborhood. I started dating someone Jewish. My mother panicked: “They’ll have you by association!” She cried. I did not understand. I assumed his illnesses were beginning to affect him emotionally.

I started dreaming about Jews, especially the Holocaust. One night my roommate found me standing on my bed, clawing at the wall and crying. I dreamed that I was in a gas chamber. I asked my Jewish friends what they thought. They were surprised to learn that I was not Jewish. They just assumed I was. I told my boyfriend, Tuvia, that my grandmother had a little old book in her room with a Star of David on it. He thought it was weird and then confessed that he sensed something in me from the moment we met – something he called Yiddishkeit. My mother told me that she had a crucial detail to tell me, a secret. She called and asked me to come, but she started to sob and said she was too scared when I arrived. I waited by her bedside for hours, but she never told me her secret.

Then suddenly she died. I was on the phone with my brother when it happened. I heard my beloved mother scream my name with such desperation that it still haunts me. After that she stopped breathing and my brother hung up the phone. I ran to the hospital, but she was already gone.

The following week, we had his body cremated. She asked to be cremated. One of the only requests she’s made in her entire life, so we honored it. I watched his simple wooden coffin enter the flames of the crematorium. My heart started pounding. I felt like I was going to vomit. I went mad with horror and grief and ran out of the building. Outside, breathless, I inhaled the sweet scent of my mother’s burning body through the fireplace. I thought I was going to faint. My father came to see me. He turned his head to look at the billowing smoke billowing from the crematorium and shook his head. Maybe it was because of all the Holocaust reminiscent images of that moment, but from that moment on I knew I was Jewish and had a connection to the Holocaust .

We went to celebrate my mother’s life at Canter’s Deli on Fairfax Ave. I ordered my mom’s favorite matzoh ball soup, with a colossal matzoh ball in the bowl. Lots of Gentiles eat at Canter, sure, but my dad’s choice of restaurants didn’t escape my newfound insights into my Jewish ancestry.

When we got back to my parents’ apartment, I went straight to my mom’s dresser in her bedroom. She kept her hairbrush in the top drawer. I loved the smell of her hair – natural with a hint of perfume. I wanted to smell her hair before it disappeared. I noticed a little yellow envelope with age under his brush. I opened it. Inside were my mother’s Displaced Person Card issued by the Allied forces and her release papers from Bergen Belsen – it was on this document that I first saw my mother’s real surname. mother: Silverberg. There were more documents. All bore the stamps of various Jewish agencies, including HIAS.

I called Tuvia, and we immediately went to the Museum of Tolerance, which was nearby, to have the documents authenticated. I cried when the young Orthodox archivist told me they were real and that I was Jewish. “Come on, it’s not that bad,” he tried to joke. Then Tuvia took me to her rabbi at Chabad in Westlake Village. He called me a talented investigator but backed off a yard when I unwittingly tried to shake his hand.

I found out I was Jewish on March 9, a week after my mother died. With my return to Judaism, I felt like I was finally home in the United States and, more importantly, in myself. Everything made sense – my grandmother’s Star of David prayer book, Woody Allen, my Holocaust dreams, my moving and haunted mother, my appearance, why we didn’t go to church, etc

I also began to understand my mother’s request to be cremated. I believe she suffered from survivor’s guilt and wanted to reunite with her many Jewish relatives and friends, whom she lost in the gas chambers and crematoria of the Holocaust. It was also a form of homecoming for her, after decades of hiding her Jewish ancestry.

My first Passover, my first Seder, was the most spiritual and profound ritual I have ever participated in. The Exodus story seemed to fit my story, and when we read how Moses didn’t know he was a Hebrew, everyone looked at me. “Just like you,” they said. “A Jewish soul, a Yiddishe Neshama, always finds the way home,” Tuvia said, holding my hand. We broke the matzoh and drank wine by the warm candlelight, although the hurt of my mother’s death hurt me deeply, I felt such love and gratitude and something I don’t never felt before: belonging.