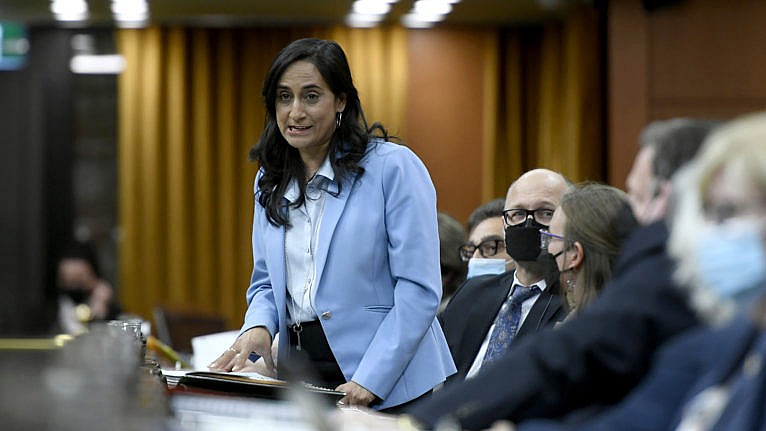 Welcome to a preview of Maclean’s Politics Insider newsletter. Sign up to receive it straight to your inbox in the morning.

Anita Anand said on Tuesday that Canada was considering stepping back and finally joining the United States in long-range ballistic missile defence, CP reports: “We certainly take a full and comprehensive look at this matter, as well as what it takes to defend the continent at all levels. We are leaving no stone unturned in this major continental defense overhaul.

Canada notoriously withdrew from the US ballistic missile defense program following a heated national debate in 2005, deciding not to invest in the network of land and sea radars and interceptor missiles designed to stop an attack on the ‘North America. The move by then-prime minister Paul Martin was seen by many as an attempt to bolster his minority Liberal government. The NDP and many Canadians have opposed missile defense, in part because of its ties to the administration of US President George W. Bush.

Attractive: Justin Trudeau told the House on Tuesday that Ottawa will appeal a decision by the Alberta Court of Appeal that ruled that the federal Environmental Impact Act is unconstitutional, CP reports.

The Alberta court said the Impact Assessment Act is an “existential threat” to the constitutionally guaranteed distribution of powers. Trudeau said the law delivered on its promise to reform a “broken system and restore public confidence in the way decisions about major projects are made.”

Extra money: Eight Ontario PC MPPs have received allowances from their riding associations over the past four years for various expenses, including childcare, entertainment and vehicle expenses, Global reports. After the issue was first raised by the NDP, Global combed through Elections Ontario records and uncovered tens of thousands of questionable payments.

Ford defends: Doug Ford was forced into the defensive on Tuesday in the first leaders’ debate as rivals attacked his handling of the COVID-19 pandemic, the Star reports. Ford insisted the province has performed relatively well compared to other jurisdictions.

A better debate: In the Star, Suzanne Delacourt points out that the Ontario leaders’ debate was much larger than last week’s between the CPC’s federal candidates.

Here’s a big difference: Ontario leaders have spared a few words for the lives lost and lessons learned during the COVID-19 pandemic. Last Thursday night, anyone listening to the Conservative leadership debate would have thought that the only damage caused by the pandemic was to the poor demonstrators in the convoy and all those Canadians forced to get vaccinated.

Democracy in action: In the hub, Howard Anglin presents a different view of the CPC debate, arguing that it is good that genuine objections to the status quo are raised within the system.

If a real protest movement develops in Canada, it is to be hoped that it channeled into the political system, rather than against. The CCP leadership debate may have been an unsettling spectacle for Canadians accustomed to the sedative tone of CBC political panels, but it was an unsettling democratic spectacle. This is a good thing. The sparks we saw on stage are preferable to real street fires.

No reset: In the World, Campbell Clark has a sharp column in the way Leslyn Lewis and Pierre Poilievre seek support from conspirators who believe the World Economic Forum is secretly running Canada.

Electrifying: In Maclean’senvironmentalist Rick Smith argues that electrification helps fight climate change, noting that everything from delivery trucks to home heating systems are on the verge of switching to greener energy.

To power all of this, power grids will need to produce up to double what we produce today. We will have to replace coal and natural gas with non-polluting sources, such as wind, solar and hydroelectricity. (By 2050, wind and solar are expected to make up 75% of the energy mix; currently they are at six.) We will also need thousands of new highly skilled workers to build the infrastructure. More cobalt, copper and nickel will be mined to make batteries. Why not do it in Canada?

Regulate? A new Nanos survey for the World shows that 55% of Canadians support or somewhat support greater government regulation of the Internet, while 37% oppose or somewhat oppose such regulation.

Cut: Speaking of online misinformation, Vice has a disturbing story about the self-proclaimed QAnon Queen of Canada, who told her followers to stop paying their electric and water bills, which cut them off from services.

Prayer Debate: The Bloc Québécois presented a motion on Tuesday to do away with the non-denominational prayer that is recited in the Commons every day, the To post reports.

Pressure on the RCMP: Marco Mendicino directed the RCMP to work closely with Indigenous communities to respond to traumatic legacy of residential schools, reports CP. In a new mandate letter to Brenda Lucki, Mendicino calls on the force to proactively release documents, help uncover truths and enable other forms of investigation as communities “demand justice for their own pace.

Failure to act: the World has a tragic story from Afghanistan, where former Canadian interpreters are sought out and tortured by the Taliban while they wait for travel documents from Canada.

Do you want more ?

Get the best of Macleanis sent directly to your inbox. Sign up to receive news, commentary and analysis.

Presidency 2023: How do Southern politicians dance to the farce or reality of brokering a united, progressive nation? By Tiko Okoye