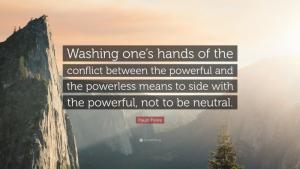 Paulo Freire, the “pedagogue of the oppressed”: is this a good choice for Jesus?

Paulo Freire was a Brazilian activist and scholar. He taught, and led others to teach, literacy to poor, oppressed, and despised people in northeast Brazil. Teaching for Freire was not just about imparting knowledge and skills. The purpose of education, he believed, was to help people discover themselves as “creative agents” rising up and changing their world. Before being vindicated by the global academic community, Freire was imprisoned as a threat to Brazil’s elite. This was after a CIA-assisted coup replaced Brazil’s once-supportive leftist government.

Does Freire’s career as a teacher of the oppressed bear enough resemblance to the work of Jesus to make it a good model? William Herzog thinks so. There is the biblical account of the many times Jesus referred to poverty, wealth, debt, and the working conditions of the poor in sermons and parables. Then there is the fact that Jesus was also an enemy of the state, or was crucified as such. Herzog, along with many others, explains that the Roman overlords of Palestine must have seen Jesus as a threat to their status and luxurious living, both of which came at the expense of the poor.

If Paulo Freire, as a pedagogue of the oppressed, is our model for understanding Jesus, then we should see similarities between everyone’s journeys. But the differences first strike the observer. Herzog, in Parables as subversive discoursechapter one, (see note below) details:

With all these differences, the similarities are still significant.

William Herzog’s method of interpreting the sources we have for the life of Jesus (mainly the Bible) differs from that of many scholars. It is not enough, he says, to collect and analyze historical data and let that fund lead to historical conclusions. These data are too incomplete and obscure. The interpretation will necessarily depend on the vision that the interpreter has of the world and its possibilities. In fact, the conclusions interpreters draw are about as numerous and contradictory as the mindsets they bring to their task. The problem, according to Herzog, is focusing so intensely on the data that personal biases operate in the background, hidden from consciousness.

A better procedure is to work upside down. Start with a tentative conclusion, or model, based on preliminary and rough knowledge of historical data. Then, see how well or poorly the model scales to further analysis of the data. Modify the model or discard the model as needed for the data. This procedure highlights personal biases.

As Herzog explains what Paulo Freire meant by “pedagogy of the oppressed,” we begin to see more similarities between this model and Jesus.

Brazil had literacy programs for the poor before Freire came on the scene. He called them “paternalistic”. Their textbooks relied on middle-class and elite words and images. This prompted peasants, who valued literacy, to devalue their own language and culture. Likewise, the elite of Jesus’ time had ways of devaluing the life experience of the poor.

Unlike these government-sponsored literacy programs, Freire studied the vocabulary of peasants and the urban poor. He chose “generative words”, words with a rich meaning and relevant to people’s lives. Kim Diaz, in an Internet Encyclopedia of Philosophy article on Paulo Freire, says it could be a word like tijolo (brick). Paraphrasing Diaz:

A teacher would break the word down into its syllables (ti-jo-lo). Students would then practice pairing consonants with different vowels (ta, te, ti, to, tu; ja, je, ji, jo, ju; la, le, li, lo, lu). They would combine the new syllables to form new words. Words like “land”, “economy” and “culture” can crop up and be discussed. During the conversation, the class might arrive at a “borderline,” a problem that the participants and the facilitator, working together, could find a way through or around.

We already see a certain similarity with Jesus. Freire’s literacy program used words that captured the rich life experience of the poor. The parables of Jesus drew verbal pictures of common peasant experiences. Did these images of words also evoke something like Paulo Freire’s “borderline situations” for the peasant listeners of Jesus? This is what Herzog tries to show in his detailed analysis of several parables of Jesus. And this will be the theme of the next articles.