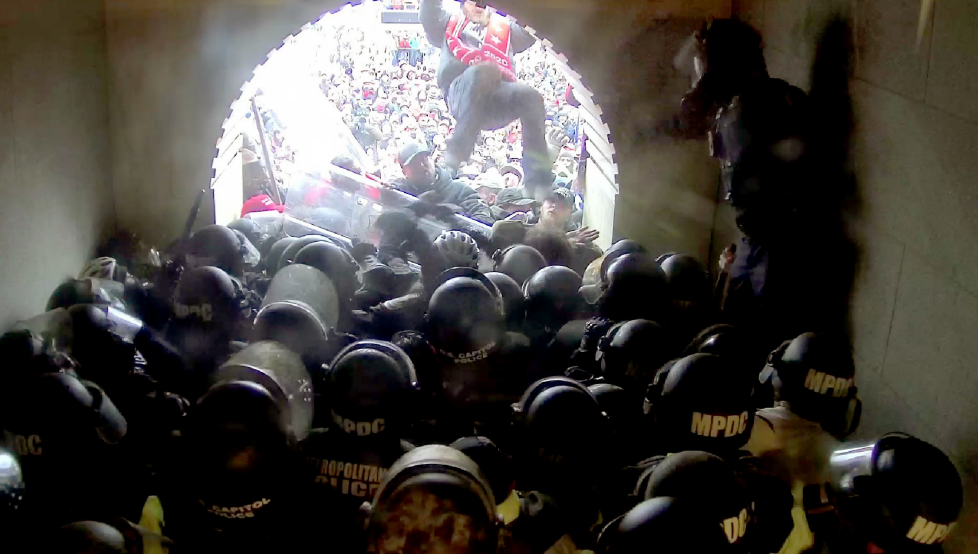 “The Oath Keepers were absolutely attempting a coup,” asserted the group’s former national spokesperson (in his own words: propagandist), Jason Van Tatenhove, during a virtual event organized by the International Center for Study of Violent Extremism (ICSVE) on June 24. , just weeks before his appearance before the select committee investigating the January 6 casee Attack on the United States Capitol in Washington, D.C. Not only that, former President Trump – through Roger Stone, Trump’s agent – ​​was actively courting militias like the Oath Keepers in order to keep Trump in power , did he declare.

Indeed, Jason would know, having the unique experience of associating with, sometimes sympathizing with, but never entirely agreeing with the now notorious violent extremist group. In 2014, the then-freelance journalist became interested in covering the standoff at the Bundy Ranch, where sovereign citizens expected a repeat of Waco or Ruby Ridge. Jason, who considered himself a libertarian anarchist, tied himself in with Stewart Rhodes, the Yale-educated lawyer and former U.S. Army paratrooper who founded the Oath Keepers in 2009, claiming the group were “defenders of the Constitution”. When Rhodes offered Jason a job as the group’s national spokesperson, Jason was attracted by the prospect of both reliable employment and adventure. He also relished the sense of importance he gained when he saw how many hundreds of thousands of people read the articles he wrote on behalf of the group. Although he said he never became an official member, Jason viewed his association with the Oath Keepers as something of a rebellion against his “leftist” upbringing among artists in New Jersey and Colorado, even though s associating with the group also meant hiding one’s identity as a member of the LGBTQ+ community. Over the years, however, Jason grew increasingly disappointed and disillusioned with what he saw as the group’s abrupt turn from libertarianism to extremism, saying that when the Oath Keepers “began courting the alt -right, [Richard] Spencer, the real Nazis, Proud Boys, I just couldn’t do it.

Jason left the Oath Keepers in 2018 but kept a close eye on the group, including inadvertently allowing Rhodes to live in his basement for eight months. Both inside and outside the group, Jason noticed much of what we at ICSVE similarly found in our research. First, it recognizes the immense role played by conspiracy theories and misinformation, especially those spread online and by Alex Jones, in recruiting vulnerable individuals and turning them into true believers. Many of those recruited were serving and former members of the military and law enforcement, a statistic the Oathkeepers are proud of. For example, in 2021, an Oath Keepers membership list revealed over 200 people who identified themselves as active or retired law enforcement officers. At the time the list was discovered, 21 were active members of law enforcement and 23 were active when they joined the Oath Keepers but had retired in the years that followed. These people swore to protect the United States and its Constitution from all enemies, foreign and domestic, but nevertheless joined an armed anti-government militia. And on January 6, 2021, many of them violently attacked the Capitol in order to obstruct the legal counting of electoral votes and keep then-President Trump in power – they attempted a coup. In January 2022, Rhodes and 10 other members of the Oath Keepers were arrested and charged with seditious conspiracy that day. In June, Rhodes and eight of his co-defendants faced an amended indictment alleging they “coordinated to use force to combat the authority of the federal government.” This revelation comes shortly after documentary footage revealed during the first select committee hearing showed the oath keepers moving in military-style formations during the riot as well as Rhodes meeting the leader of the Proud Boys. , Enrique Tarrio, before the riot.

Jason was unsurprised by the Oath Keepers’ actions on January 6, confirming that the group fully intends to keep President Trump in power by any means necessary. “We saw them in pile formation marching up the steps of the Capitol on January 6 in a true insurgency coup attempt,” Jason told the ICSVE audience. In fact, he said during the virtual ICSVE panel that if the group was led by a “true believer” rather than a rather disorganized Rhodes, who seems to be mostly focused on making money, they might have be successful. Why would active military and veterans agree to be part of a group so unconstitutional that they are sworn to defend? In ICSVE’s research of 50 current and former members of white supremacist violent extremist groups (not including Jason), we identified four reasons why violent extremist groups recruit the military:

Of course, the simple fact of wanting to recruit soldiers is only one side of the coin. Our research also revealed four main reasons veterans, and law enforcement, might be attracted to violent extremist groups:

Jason confirmed the same in his own close encounters with military special forces, active duty, and vets who joined and trained members of the Insurgency Band against the Federal Government. For all of the above reasons, far-right violent extremist groups, particularly the Oath Keepers, have engaged and succeeded in recruiting current and former members of law enforcement and the military into their ranks to s lead to and possibly backfire on the government they promised. an oath to protect. As a result, Jason explains, they were horribly close to pulling off a coup on January 6. Jason’s testimony will certainly reveal much more about the mindset of the members of the Oath Keepers, but we can be certain that this is not simply a problem of the past: the Oath Keepers, and all groups that follow, have learned from their mistakes and are likely to try again.

The views expressed here are those of the author and are not necessarily endorsed by Homeland Security Today, which welcomes a wide range of views in support of securing our homeland. To submit an article for review, email [email protected]

Isabel Florence Hapgood: A very small meditation on how Eastern Christian mystical theology is beginning to touch the West

Only the best glitter is good enough for this Dolby poster