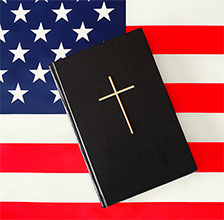 Nationalist white Christians favor the American church-state the integration (rather than separation) are even outliers in the Republican Party, according to a new Pew Research Center report on American religiosity.

It’s fascinating because the Christian right (and Republicans in general) seem so determined to establish an American Christian theocracy, despite the secular vision of our founding fathers that was decidedly down to earth, not heaven-sent. And many non-religious citizens assume that all Republicans share the same ideas as zealous evangelicals. That’s not the case, according to data from Pew.

On the one hand, it is encouraging to learn that a majority of Americans (55%) oppose any religion jumps into bed with our government, according to this latest Pew survey, released late last month. Its summary report is entitled “In the United States, much more support than opposition to the separation of church and state: But there are pockets of support for greater integration of church and state, more Christianity in public life..

On the other hand, it is deeply disturbing, as data from Pew also shows, that these many American citizens who support church-state the integration (largely white, nationalist, evangelical Protestants) have fragile opinions that are belied by the facts.

For example, Pew notes that,

“Those [new survey] the findings are consistent with much of the existing research on Christian nationalism, which demonstrates that among whites, Christian nationalism is linked to support for the Republican Party, enthusiasm for Trump, hostility toward immigrants, and denial that racism is pervasive or systemic in America. … [and that a majority of White Americans] reject the idea that being a black person is much more difficult than being a white person in the United States today.

“In fact, strong Church-State separationists are the alone group white respondents who are mostly Democrats, who mostly think Trump was a below-average president, and among whom a majority say being black in the United States today is much harder than to be white.

“In other words, to the extent that views of church and state are related to other social and political attitudes among white respondents, those with the strongest separationist views of Church and State are, in some ways, more distinct from other whites than those who have Church. -the integrationist views of the state. (mine in bold)

That is to say that there are still far too many white americans agree with the concept of Church-State integration than is healthy for our secular democracy. Fortunately, with all key demographics represented (as in the latest Pew survey), 55% of Americans globally rejected church-state integration, 28% “strongly”, Pew reported.

In contrast, the report points out, only about one in seven American adults (14%) – but that’s still a lot millions of Americans – express support for an “integrationist church-state perspective”.

So, fortunately, from a secular democratic perspective, the “integrationists,” as Pew reported, are overall outliers:

“The survey further shows that even in the groups that tend to express the most support for mixing church and state, the ‘Church-State integration’ perspective is the exception, not the norm. . Among white evangelical Protestants, for example, less than half (36%) express consistent support for an integrated church-state perspective, though this is larger than the share of white evangelicals who favor the separation of Church and State (26%)”.

These results also follow politically. Among Democrats and Democratic-leaning Americans, 72% prefer a strong church-state divide, Pew reported, compared to just 38% of Republicans (25% of GOP members favor the integration of Christianity in the US government).

Surprisingly, the survey found that 38% of black Americans, who are largely Democrats but also often devout Christians, support public school teachers being allowed to lead students in prayer. That’s even more than the 31% of white Americans overall who support this idea.

Discouragingly, the majorities in every integrationist church-state category in the survey held clearly unconstitutional views. Pew reported that 60% of those respondents wanted the federal government to “uphold Christian religious values,” and 88% supported cities and towns publicly displaying religious manifestations and granting public school teachers the right to leading Christian prayers in class.

The percentages reversed with religious separatists, with 58% opposite public governmental religious demonstrations, and 95% who categorically rejected the government declaring an official or preferred religion.

The survey results show that support for the separation of church and state is biased by education and age, with the best-educated and younger Americans leaning a lot more separatist than their opposites.

The good news is that the extremist views of the Christian right in American politics are currently shared by far from being the majority being roughly proportional to the 26% of Americans who are atheists, agnostics, or not affiliated with any religion—the so-called “nones” (derived from their response on official forms declaring their religion).

Yet politically, right-wing Christians have consistently outgrown their weight for decades as newly emerging non-religious Americans try to figure out how to build effective political clout in American life. American religious people, especially evangelicals, have been politically organized and successful since the Moral Majority movement of the 1980s failed to follow, culminating in the 2016 election of former President Donald Trump. Christian legislators – Catholic and Protestant – not only dominate US state chambers and the US Congress today, but also the US Supreme Court.

And it is in these places that religion insinuates itself into American governance, such as the addition of “under God” in the official oath of allegiance and “In God We Trust” on all American currencies. These changes were spurred by Congressional amplified fear of “godly communism” during the H-bomb terrors of the 1950s, and the need to appear more pious than Russia.

For now, the separation of church and state in America is somewhat holding, but influential fanatics on the Christian right continue to try, as with the divine slogans of the 1950s – sometimes successfully – to insert the dogma and practices of their faith into the tax-funded public square. .

The division over the separation of church and state is historically unsurprising in America and, as Pew noted, that “some Americans clearly yearn for a more overtly religious and explicitly Christian country.”

It is the age-old conflict between the intent of the Founding Fathers – a secular democracy based on reason – and the fact that most early settlers were fundamentalist Christians, evolving into modern sectarian dominance in American affairs.

“The First Amendment to the United States Constitution provides that the country shall have no official religion,” the Pew report said. “At the same time, Christians continue to make up a large majority of American adults – despite a rapid decline in recent years – and historianspoliticians and religious leaders continue to debate the role of religion in the vision of the founders and of Christianity in the identity of the nation.

Yet it remains clear that the spiritual “desire” of American Christians today does not match the secular vision of the Founders of yesteryear. And even their allies seem to understand this – and the inherent dangers of theocracy in a democracy.