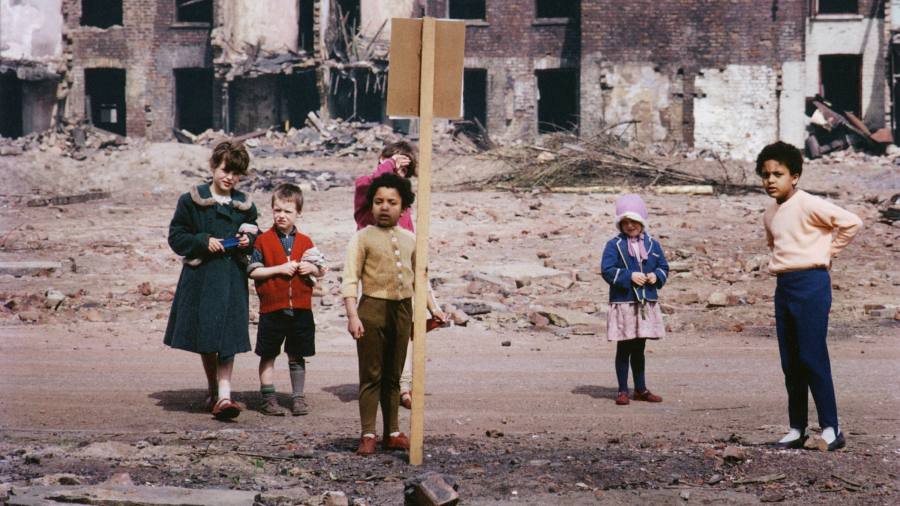 Post-war modern at the Barbican – rebirth of a nation

During the sleepless nights of post-war London, the unknown and impoverished artist Frank Auerbach panicked that he could no longer afford to paint and had to stop working. The possibility seemed real enough, given the lavish volumes of smeared, stacked, solid yet mysteriously animated pigments, in its dizzying configurations of beams and planks, towering scaffoldings and deep pits, carcasses of ancient buildings, skeletons again. “Shell Building Site” and “Rebuilding the Empire Cinema, Leicester Square” depict London’s emergence from the ruins of war, its upheaval and its regeneration. “There was a curious sense of freedom because everyone who lived there had escaped death. . . it was sexy in a way, this half-destroyed London,” Auerbach recalls. Yet “the atomic bomb was hovering over all of our heads. Very few of us thought we had many years left to live.

The Barbican is fascinating but constrained Postwar Modern: New Art in Britain 1945-1965 corrects this uplifting/pessimistic moment through works by dozens of early-career artists, with the gallery itself both a featured exhibition and a resonant setting. Plans for the Barbican estate, which was to rise on the scorched earth of the bombed-out Cripplegate, were drawn in the mid-1950s and the foundation stone was laid in 1963. The show draws parallels between lumpen, idiosyncratic architecture and audacious vision of the Barbican, “a hybrid child of pre-war utopia, post-war madness and urban reconstruction”, as curator Jane Alison describes it, and the inventiveness of the artists – their commitment with materiality, the desire to build, the spirit of creation from destruction.

Gustav Metzger’s film about throwing acid on dissolving fabric on the South Bank, allowing fragmentary views of the city, in “self-destructive art”; William Turnbull’s totemic endurance bronzes, with ravaged skins, “War Goddess” and “Standing Female Figure”; Francis Newton Souza’s schematic and assertive black characters reimagined as Christian martyrs “Mr Sebastian” and “The Agony of Christ”: the works form a desperately timely image of a nation emerging from trauma to face new horrors – the Cold War and the atomic age – amid austerity and glimmers of hope to build back better.

The fact that many – and the majority of the best – pieces are of immigrants, from India, the Caribbean or European refugees, gives the optimistic subtext of a new, albeit fragile, society in the making. Indeed, throughout, brutalism is tempered by a sense of vulnerability, embodied in the opening giant sculpture, Lynn Chadwick’s welded iron and copper “The Fisheater,” part bird, part machine, predator yet delicate, a desperate continuation of a creature.

The opening painting, “Full Stop” by John Latham, a large jagged black circle, or black hole, created with a spray gun, seems to speak of endings and fraying. Yet a few haloed hazy dots on the pale backdrop also suggest light reflected from planets in a dark galaxy: an expanding universe.

The same goes for Leon Kossoff’s tour de force “Willesden Junction, Early Morning”: flowing train tracks in ochre/shadow/grey impasto meet a creamy striated dawn sky, luminous despite its heavy surface, heavy as a sculpture. From this abandoned sprawl, nicknamed “Wilderness Junction”, Kossoff evokes the urban ground zero. “Like lava in a volcanic crater . . . the great furrows of paint rush to a vanishing point at the edge of a strange, tilted world,” Terence Mullaly wrote when this gritty, sultry painting debuted in 1963.

A strangely spiked world has prompted — demanded — strange new approaches. “It’s going to be harder and harder to do what used to be called figurative painting,” said Francis Bacon, the longest-serving painter at the show. “Reworking the image will require increasingly profound, sensational and evocative means.” Understanding how the generation born in the 1920s/30s responded to this challenge is one of Post-war modern‘s most rewarding veins.

Lucian Freud made cold and linear realism so lucid that it shocks: pale skin of death, frightened eyes, powerful rhythms of forms, suffocating atmosphere. Portraits of his first wife Kitty in “Girl with Roses,” repeated petal patterns in her upturned skirt, twisted lips, pleated curtains, and his second wife Caroline, shivering under the sheets after breaking the window to let in more light, in “Hotel room”, while he stands there, a malignant specter, earned Freud the nickname “the Ingres of existentialism”. “I was terribly restless and Caroline was terribly nervous,” he said: a portrait of the times, as well as a disintegrating marriage.

Frank Bowling’s marvelous ‘Big Bird’ – two swans, one soaring, the other falling, with luminous planes of color bleeding through the flapping of white wings against a cube-patterned sky – owes its painterly construction to ‘a fuzzy and violent central image to Bacon, but Bowling style vibrantly independent and bursts of heat. The analogy, he said, was “the dying swan.” . . people who have shattered lives – if you don’t straighten up and fly properly, you’re going to end up in the gutter.

Partly based on his sadistic lover Peter Lacy, Bacon’s own disturbing series here, “Man in Blue” (1954), featuring a cheerful, unsympathetic businessman with a fiercely smeared face, imprisoned in a cage – solitary confinement, alienation, locked up desire – is paired, brilliantly, with the grating figures of the young David Hockney, the cryptic codes, the graffiti, the phallic towers pushed into “I’m in the Mood for Love” (1961) and “My Brother is Only Seventeen” (1962). Virtuoso, richly textured comedies, they shed Bacon’s high degree of seriousness, play fast and loose with figuration/abstraction and speak frankly about gay love. They anticipate the social changes of the 1960s era and the freedoms of pop art.

As an investigation of two decades, the show’s weakness is its half-hearted attention to this changing moment. Rationing ended in 1954, Britain got richer, opportunities brightened, but you would hardly know that here. A small section, “Lush Life”, features Richard Hamilton’s curvy, ironic convergence of curvy woman and car hood “Hers is a lush situation” and Eduardo Paolozzi’s “Bunk” collages, critiques/celebrations of consumerism, but other key emerging voices expressing the burst of energy of the early 1960s are absent. No Bridget Riley — The scintillating dots of Op Art, the pulsating movements. No Howard Hodgkin – portraits reimagined as playfully colorful semi-abstraction.

The abstract painters included instead – Alan Davie, Gillian Ayres – are less original and much less fun. And the aim of excavating artists “hitherto marginalized” arouses little interest among painters: exhibited alongside Freud, the cross-dressing portraits of Sylvia Sleigh look childish and inept, and it is difficult to enthuse about the repetitive cell forms of Prunella Clough.

But among photographers, an unusual revelation: the color shots of Shirley Baker in the lanes of Hulme, Manchester, in the summer of 1965 – prams around an ice cream van, women rushing through demolition rubble, a laughing black family perched on a ruined step, an old woman, monumental, hieratic, peering through a doorway amid graffiti and shards of glass. Spontaneous but extremely well composed, they leave memories of sunshine on broken stone and long shadows of children across urban wastelands, of ramshackle and intimate interiors glimpsed through dilapidated doorways, of everyday joys and survival. Baker’s human vision lights up a show whose somber tone, sadly, feels just right at the moment.

Faustus Socinus and a naturalistic Christianity