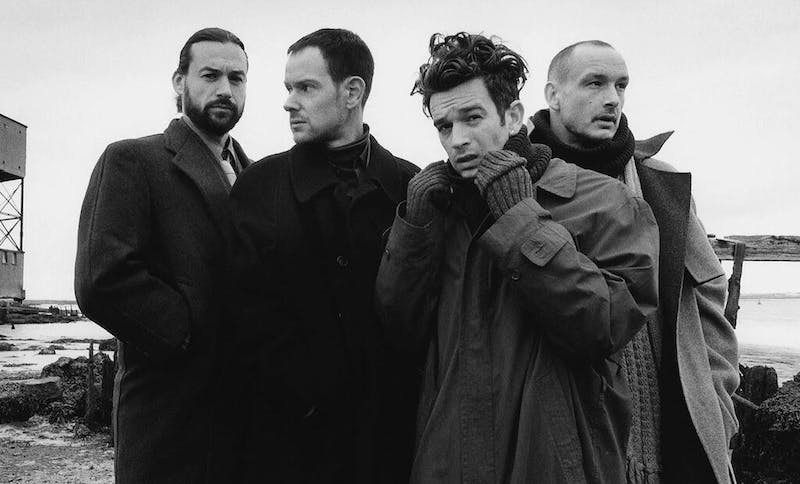 Review: 1975 Exceeds Expectations on “Being Funny in a Foreign Language”

Best track: “About you”

Longtime fans know the drill: Previous posts are deleted and/or archived, and their Instagram goes blank — for a little while, at least. And then, on June 1 (coincidentally, the band’s birthday), a photo popped up on their social media accounts and there they were – our favorite British men (no, not the Beatles). It’s a new era for our old friends: The 1975.

Nearly two years after their 2020 release, “Notes on a Conditional Form,” the band are back and at their best (or so they say – they named their tour “The 1975 At Their Very Best”) with their highly anticipated fifth studio album, “Being Funny In a Foreign Language”. Released on October 14, the album is a sigh of relief for fans who love their 2013 self-titled debut a little too much (me) and found “Notes” slightly disappointing (me, too).

“Being Funny in A Foreign Language”, consisting of 11 tracks, navigates themes such as post-modernism (because it wouldn’t be The 1975 if it weren’t for post-modernism), falling in love, school shootings, self-reflection and empathy. The album, while short, is cohesive and reminiscent of older albums – with plenty of Easter eggs strewn throughout for fans to enjoy and potentially cry over.

The reminiscence tune begins with the ever-awaited intro and recap track “The 1975.” The song, says Matty Healy, “is still our status update”, a four-minute account of the state of the world as the lead singer perceives and experiences it. In this album’s version of the track, Healy sympathizes with the teenagers in our present world, singing “I’m sorry if you live and you’re seventeen” and mocks himself, calling himself out for ” makin’ an aesthetic not to do well.

The album’s first single, “Part of The Band,” is a perfect glimpse into the band’s new era, one in which Healy isn’t afraid to say it like he sees it. He not only tells the stories of the world’s soymilk drinkers and tote bag carriers, but shows deep introspection on his own personality. He boldly alludes to the “grinding of his teeth” from his former heroin addiction and concludes the song by wondering if he’s “just a skinny, average, post-Coke guy calling out his imaginary ego?” For someone who “always degrades the sincerity” of his words, it’s refreshing to see this side of Healy – confessional and critical not only of society as a whole, but of himself, above all.

The next two tracks, “Oh Caroline” and “I’m In Love With You”, blend seamlessly into each other and are both on their way to becoming fan favorites (if not already). The stories in both aren’t particularly groundbreaking — it’s just that Healy is in love — but the standout part is its lack of pretension. He just says what he feels – no post-modernism, no existentialism – purely love and some songs that will surely unite touring crowds.

My favorite, “About You”, musically resembles one of The 1975’s most beloved songs, “Robbers”, and therefore serves as a continuation of that story. Additionally, the opening lyrics “I know a place” transport listeners to a track titled “The Birthday Party” from the “Notes” era, as Healy begins the track the same way. Overall, the song evokes an all-consuming nostalgia that transports listeners, especially us longtime fans, back to 2013, the era of Tumblr and Doc Martens.

Overall, “Being Funny in A Foreign Language” lives up to expectations and gives fans planning to attend their next tour a lot to look forward to. While nothing can ever surpass the masterpiece that is the band’s self-titled album, the new record exemplifies Healy’s healing: he is indeed capable of introspection and empathy. And, of course, the album further proves that anything produced by Jack Antonoff is nothing short of perfection.