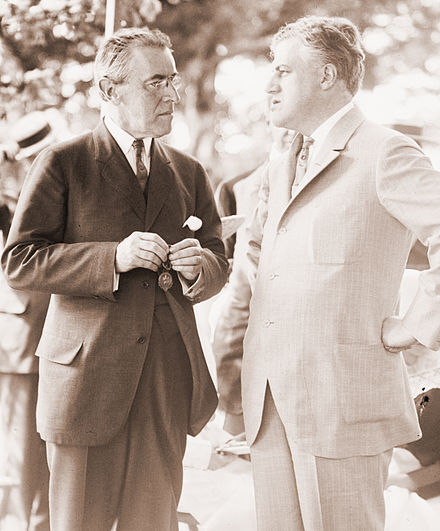 In my continuing journey to explore Quaker history, particularly the ironies and counter-ironies that a narrative of the past reveals, I have come across this interesting personal account. Briefly, A. Mitchell Palmer served as Democratic President Woodrow Wilson’s attorney general from 1919 to 1921.

Over time, Palmer’s initial political stance shifted drastically from a more progressive and idealistic view to a reactionary view based on fear. Wilson’s own view has suffered greatly in scholarship, as seen today without the reverence he once commanded for the creation of the League of Nations, the forerunner of the United Nations. These days, Wilson is best known for his racism and shameless pettiness.

What about our Friend Palmer? He has a curious life story. In many ways, he’s the quintessential East Coast insider, with elite credentials and a Quaker pedigree.

Mitchell Palmer (as he was known to his friends) was born into a Quaker family near White Haven, Pennsylvania, in the small town of Moosehead, on May 4, 1872. He was educated in public schools and in Bethlehem, Pennsylvania , Moravian Parochial School.

Palmer graduated from Swarthmore College in 1891. At Swarthmore he was a member of the Pennsylvania Kappa chapter of the Phi Kappa Psi fraternity. Upon graduation, he was appointed as a court reporter for Pennsylvania’s 43rd Judicial District. He studied law at Lafayette College and George Washington University.

Although initially a strong progressive in his home state of Pennsylvania, Palmer’s allegiances changed dramatically over time. This was especially true when it came to his views on war and warfare. Quakers have long felt conflicted over their professed position as strict pacifists in a world that sees little or no harm in armed conflict.

Even during the American Revolutionary War, friends like Nathanael Greene, the so-called “Fighting Quaker”, did not think to cast their testimonies and peaceful natures aside. Greene was a very successful general on the side of the American colonists.

With the election of Democrat Woodrow Wilson as President in 1912, Mitchell Palmer was offered the post of Secretary of War. He refused. Like many Quakers, his anti-war orientations and upbringing caused him to suffer a huge existential crisis, or at least at this point in his life.

As a Quaker Secretary of War, I should consider myself a living illustration of a horrible incongruity… Should our country come into armed conflict with another, I would go as far as any man for his defense; but I cannot, without violating all the traditions of my people and going against all the instincts of my nature, planted there by heredity, environment and training, sit cold-bloodedly in a post leadership and use the talents I possess to work in preparation for such a conflict.

“Nevertheless, in 1915 Palmer proved out of step with the public mood” [after the British passenger liner Lusitania was sunk]. The shocking act was considered totally unprovoked. About 120 Americans died in the tragedy, along with 1,000 others. Palmer offered reporters his opinion that “the entire nation should not be asked to suffer” to avenge the deaths of passengers who ignored warnings not to travel on ships carrying munitions. As he said himself, three years later…”

“The power of war is necessarily a power inherent in any sovereign nation. It is the power of self-reservation and this power has no limits other than the extent of the emergency.”

Back in 1915, the American people were bloodthirsty and wanted revenge. Although it was later revealed that indeed the good ship Lusitania had carried arms for the Allied Powers during World War I, the brazen attack and sinking of the ship by German U-boats defied and changed American public opinion on the Great War. .

Although Wilson campaigned for a successful second term a year later with the slogan “He Kept Us Out of War”, war nevertheless ensued, as American troops entered the conflict shortly time after.

After the United States entered World War I in April 1917, Palmer volunteered, despite his Quaker background, to “carry a gun as a soldier” if necessary, or to “work at n ‘any title without remuneration’.

He chaired its local editorial board for a time, while Herbert Hoover, ALSO a Quaker (later President of the United States), head of the new Food Administration, refused to appoint him to a position in his agency . In October he accepted an appointment from Wilson as Custodian of Foreign Property, a position he held from October 22, 1917, to March 4, 1919.

A wartime agency, the Custodian was responsible for the seizure, administration, and sometimes sale of enemy property in the United States. Palmer’s background in law and banking qualified him for the position, as well as his party loyalty and intimate knowledge of political patronage.

After a few bombings led by radical anarchists caused panic, Palmer’s perspective began to change dramatically. One of them, it should be noted, nearly killed him and his whole family…exploded on the porch of the Palmer family residence in Washington, D.C.. Palmer reacted in sheer panic, seeing enemies around every corner, persecuting union leaders like the equally deadpan socialist Eugene Debs, breaking habeas corpus in the process. To some extent, this first red alert was based on existing concerns, particularly the success of the Bolsheviks in Russia, which would soon become known as the USSR. The list is lengthened increasingly.

We don’t have much collective memory of this period in our history, just over a century ago. One hopes that the paranoia of one’s time will not return – a time when one “altered” those who are not like us: foreigners, communists, socialists, immigrants, leftists – it is an all too familiar tune. It is often extremely effective. May we be wiser today.