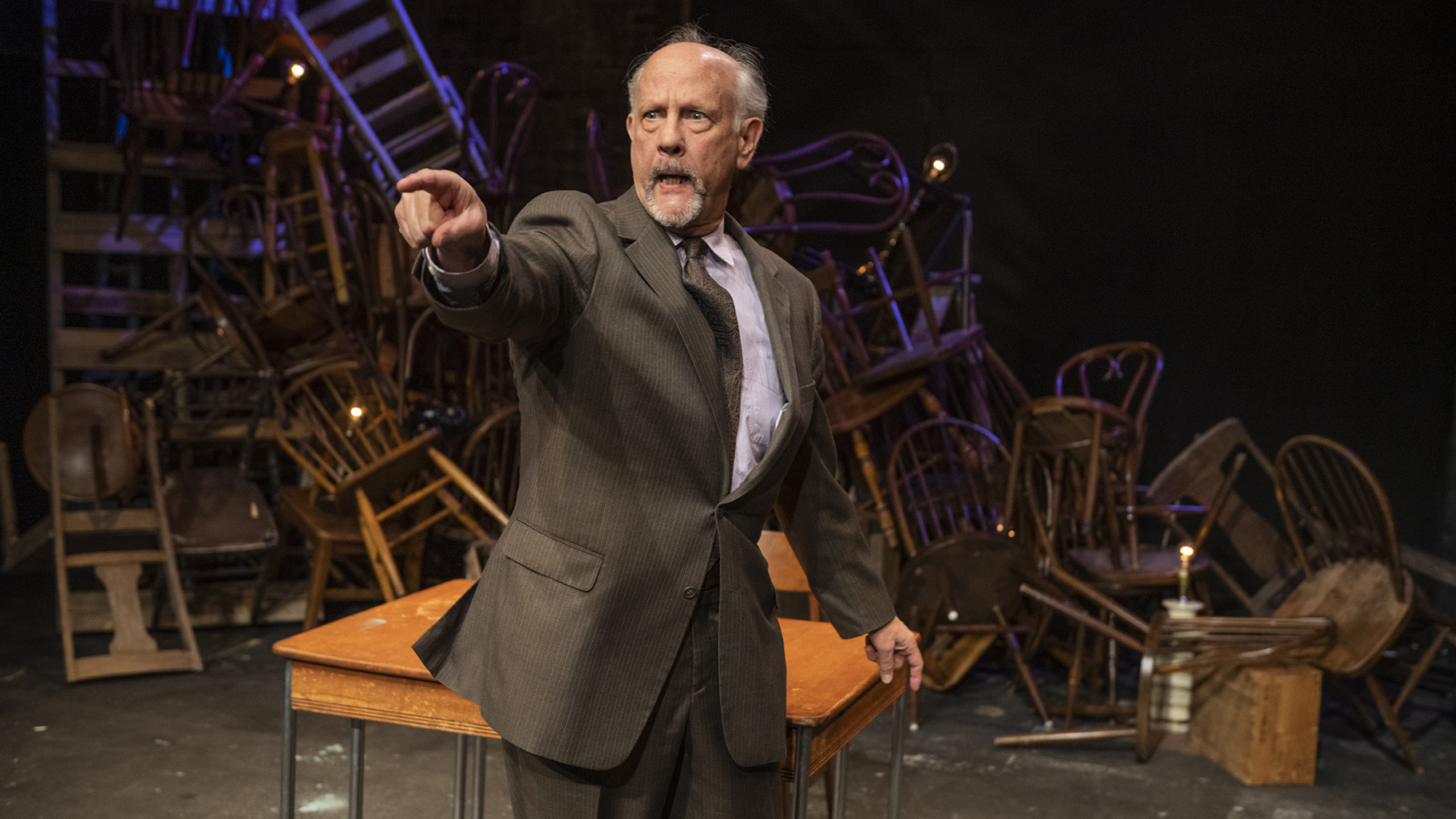 Jim Ortlieb performs in John Kolvenbach’s ‘Stand Up If You’re Here Tonight’, which is currently running at the American Blues Theater until April 9, 2022. (Credit Michael Brosilow)

There’s more than a touch of genius to American Blues Theater’s production of “Stand Up If You’re Here Tonight.” And that genius must be credited equally to the conceptual wizardry of playwright/director John Kolvenbach and Jim Ortlieb, a veteran Chicago actor with a host of Broadway, film and television credits, whose utterly captivating performance as as a Universally Named Man is simply phenomenal. A real tour de force.

But pay attention (but not at all frightened): as an audience member, you will be asked to become a group force contributing to this piece – a work which, it must be said, gives Samuel Beckett a real race for his money in his exploration of isolation and existentialism. And all it takes to assure this man that he’s really alive is a little applause, a few moments standing next to your seat, and the hum of musical tones from a touch tone phone inside. Ancient. The only rule for the night is that the audience members “be there”, that is, they validate his being by responding to his presence.

Hungry for human relationships, this drained middle-aged man longs for lost relationships, especially with his mother. And now, turning to us with a palpable desperation that suggests the human condition at large, it also subtly reminds us of what has been lost throughout the pandemic – both for artists and their audiences, and for the many others separated from interaction with family, friends and the world at large. In a sense, the title of Kolvenbach’s play suggests all of this.

The power of this work largely depends on the power of an actor of extraordinary skill. And Ortlieb, a skinny fellow with a slight beard, who here is dressed in a suit and tie worthy of an office underling (and who earlier in life might have been the student left behind in a otherwise empty dormitory during the holiday season), gives an eerily brilliant, perfectly controlled, yet emotionally feverish performance that suggests a man just on the verge of a psychological breakdown.

He is by turns sardonic, self-destructive, and both painfully self-aware and self-mocking. Of course, the wonderful irony here is that by capturing the man’s inability to forge or maintain personal relationships, he achieves an amazing interaction between actor and audience.

The perfect backdrop for the piece was designed and lit by Michael Trudeau, and is a frozen avalanche of loss in the form of a stack of vintage wooden chairs that suggests a deeply troubled state of mind.

And be advised: the play has a terrifically polished surprise ending that shouldn’t be divulged here. You just have to see this fascinating production and stand up to applaud everyone who participated in it.

One final note: After more than three decades as a traveling but popular and award-winning company, American Blues Theater recently announced that it has purchased a 17,965 square foot property in Chicago’s Lincoln Avenue North Arts District to serve as its permanent residence. The building will include two theaters (a 148-seat proscenium and a 40-seat flexible studio), as well as office and storage space, a bar and concessions area, and small on-site parking. It is designed by John Morris of Morris Architects Planners, with theater systems from Schuler Shook. Groundbreaking is scheduled for next summer and completion is scheduled for November 2023.