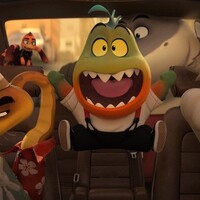 As Pixar and Disney Animation continue to soar to new heights, earning critical acclaim, box office success, and Oscar nominations at virtually every turn, their arch-rival DreamWorks Animation hasn’t. been successful since Shrek and its immediate sequel, Shrek 2has made it a major name in the field of family entertainment.

Too often prioritizing quantity over quality, the DreamWorks Animation brand subsequently suffered. Their latest direct-to-cinema release, The villains, probably won’t do much to elevate DreamWork Animation’s somewhat tarnished brand, but on its own, it’s a gorgeous addition to their catalog. For families willing to give it a chance on opening weekend, it’s a pleasant diversion from the daily worries (and every night).

Based on Aaron Blabey’s hit series aimed at children and inexplicably set in a reality where talking, self-aware humans and animals live in mostly peaceful coexistence, The villains focuses on an anthropomorphic heist gang inspired by the George Clooney-led iteration of Ocean’s Eleven and its two suites. Led by a bipedal wolf, Mr. Wolf (voiced by Sam Rockwell) in tailored suits and a cool, calm demeanor, the villains thoroughly enjoy the thrill of the hunt, not to mention the thrill of escape, flying in broad daylight and/or robberies (a bank in the first scene), robbing the well-insured to give themselves to themselves. It’s an unexamined life filled with the kind of surface-level excitement that Mr. Wolf doesn’t bother to question, especially when his immediate circle (i.e. his gang of burglars) support him to the end.

With the help of Mr. Snake (perfectly cast podcast legend Marc Maron), an irascible, grumpy reptile who can move in and out of any seemingly impregnable area; Mr. Shark (Craig Robinson), a surprisingly effective master of disguise; Mr. Piranha (Anthony Ramos), the little muscle of the team; and Tarantula (Awkwafina), the Bad Guys’ obligatory hacker, Mr. Wolf can do anything to anyone within reason and usually get away with it, though it usually takes inspired driving skills of Mr. Wolf to escape his longtime nemesis, the hyper-exciting and perpetually frustrated police chief Misty Luggins (Alex Borstein), and the city’s seemingly endless supply of interchangeable uniformed cops.

Mr. Wolf’s life choices are thrown into question, however, when he helps a little old lady from falling down a flight of stairs at a gala. This, in turn, sets up Mr. Wolf’s existential dilemma: if doing good makes you feel good, then why continue to lead a life of crime as an outsider and risk possible imprisonment and ostracism?

Meeting newly elected Governor Diane Foxington (Zazie Beetz) as Mr. Wolf, a bipedal animal who walks and talks, but unlike Mr. Wolf, an insider and not an outsider, also prompts her to rethink her life choices. . Getting caught in the middle of a burglary also gives Mr. Wolf a seemingly easy way out: pretending to do good and dragging his reluctant team on their redemptive run under the presumably well-meaning tutelage of the celebrity humanitarian/guinea pig of the city, Professor Marmalade (Richard Ayoade).

The villains mixes generally innocuous themes (i.e. the danger of stereotypes, altruism versus self-interest, the possibility of redemption/rehabilitation), with tween-oriented humor (Mr. Piranha’s flatulence problem) , pop culture references and broad physical comedy, the latter inspired by both Looney Tunes and Japanese animation. Deliberately adopting a less-is-more approach to animation, avoiding hyper-detailed photo-realism or its approximation for a more eye-pleasing, cartoon-influenced style, The villains constantly hovers over its visual style and imaginative pyrotechnics, the latter almost making The villains worth the price of admission.

The villains opens today (Friday, April 22) exclusively in theaters via Dreamworks Animation. Visit the official website for locations and times.

Why We Should Embrace Gandhian Modernity