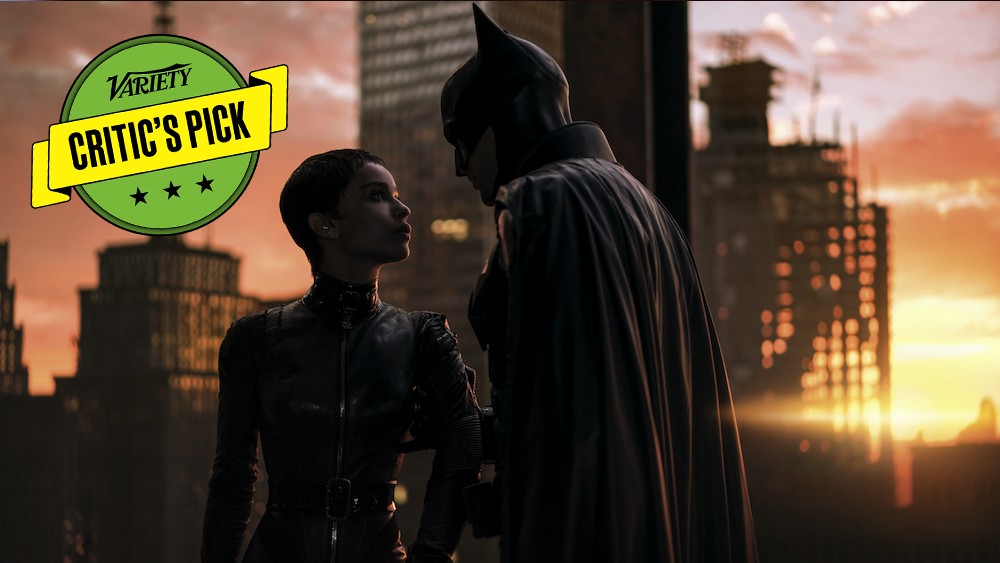 Where are you going after “The Dark Knight”? Ben Affleck blew it, and even Christopher Nolan, who brought unprecedented levels of realism and gravity to this franchise’s best Batman saga, couldn’t better what he created in his sequel. 2012. So, what is the strategy of “Cloverfield” director Matt Reeves? Answer: Get darker than “The Dark Knight”, deadlier than “No Time to Die” and longer than “Dune” with a self-contained, serious Batman. Leaning into these elements doesn’t automatically mean audiences will embrace Reeves’ vision. But this grounded, often brutal, nearly three-hour film noir ranks among the best of the genre, even though – or more aptly, because – what makes the film so great is its willingness to dismantle and… question the very concept of superheroes.

Of course, it’s been done before – “Who’s watching the Watchmen?” Alan Moore asked memorably, influencing decades of spandex-clad savior stories — though Reeves does something relatively unique here, at least by comic book standards: He strips the genre of its supernatural elements ( even more than the Nolan trilogy) and presents a more complex version of a classic pulp hero who is only a hair’s breadth from the story’s villain, morally speaking. While these films are usually defined by their villains, “The Batman” puts you in your shoes by asking yourself: what if the good guys weren’t really the good guys? What if the person we relied on to protect us made the situation worse?

While Batman – who is played here by dark ‘Twilight’ star Robert Pattinson, portraying the tortured psychology of the orphaned character to an almost painful degree – focuses on beating up petty thugs in shady alleys and on docks. from the subway, the Riddler (a genuinely disturbing Paul Dano) emerges to expose/eliminate the white-collar scoundrels embedded in the highest levels of power. Both men are vigilantes, though one is concerned with helping police, while the other targets the systemic corruption that undermines our trust in such institutions — in Gotham City, of course, but also outside. screen.

In a far more unsettling way than most viewers might expect, “The Batman” channels the fears and frustrations of our current political climate, presenting a meaty, well-rounded crime saga that blends elements from the movie of classic gangster with cutting edge challenge commentary. facing the modern world. It’s an extremely ambitious undertaking, and strong enough to function even without Batman’s presence, though it would have no reason to exist without him. But incorporating the character and so many of the franchise’s trademarks – Catwoman (a slinky Zoë Kravitz), the Penguin (almost unrecognizable Colin Farrell), trusty butler Alfred (Andy Serkis, fully analog) and an epic car chase involving the latest iteration of the Batmobile – Reeves electrifies the dense, ultra-dark procedural with an added level of excitement that justifies the film’s relatively demanding running time.

Right from the start, the director breaks away from the stylistic influences of the genre, establishing a tone that almost never seems derived from other comic book films. That said, one could certainly cite Jeph Loeb and Tim Sale’s killer series “The Long Halloween” as a common thematic influence between this and “The Dark Knight.” It’s where crime boss Carmine Falcone (John Turturro) comes from, though the hands-on action sequences are closer to Korean films (like “Old Boy”) than Nolan’s ’70s nouveau style.

“NO MORE LIES,” reads the blood-red indictment scrawled across the face of the Riddler’s first victim, no less a figure than Gotham’s disreputable mayor (Rupert Penry-Jones). This is just one of many grisly murders perpetrated by this maniacal avenger, who is as twisted and self-righteous as that sick man from the “Saw” movies. Edward Nashton, aka the Riddler, wears greasy Coke bottle goggles and what looks like a leather fetish balaclava (turns out to be a winter battle mask), livestreaming his mind games on a bulletin board for conspiracy nutcases. But here’s the twist: There truly is one of Gotham’s most powerful conspiracies, one that traces back to the Wayne family, and it’s up to Bruce to unravel it before it tears the city apart. Why him? The Riddler lured Batman, leaving handmade maps laden with numbers and other puzzles at each of his crime scenes.

Part of the film’s “reality” is to avoid calling comic book characters by their traditional names. You may have noticed the “the” in the title of “The Batman” and wondered what it meant. By using the definite article, Reeves isn’t necessarily trying to say he created “the” definitive on-screen incarnation of the character. On the contrary, this little extra word casts an air of existential mystery around its masked and anonymous hero, who doesn’t even know what to call himself at first. When the hulking leader of a violent street gang mocks him, “Are you supposed to be?” the bat-clad vigilante growls back, “I am Vengeance.”

That’s how Bruce Wayne thinks of himself when we first meet this version of the character – no origin story, but rather in the media – two years after defending Gotham from the brink of anarchy. Ravaged by a major narcotics epidemic, thanks to a street drug called “drops,” the city finds itself dealing with a level of mayhem somewhere between a pre-Giuliani Manhattan and the final minutes of Todd Phillips’ “The Joker,” though both films exist in different dimensions of the same Gotham multiverse. Reuniting with production designer James Chinlund (with whom he worked on the “Planet of the Apes” sequels), Reeves presents the most rugged version of Gotham we’ve seen since Tim Burton’s “Batman” in 1989.

Clearly modeled on New York City, amplified by set extensions and stunning CGI, this seedy metropolis plunges us into the rotten core of the Big Apple: Downtown’s equivalent of Times Square is lit up by digital screens still more giant, a black cluster of buildings looms where Manhattan would be, and you don’t want to go anywhere near the Madison Square Garden-like arena where the finale takes place. Sometimes Batman watches over the city from an upper floor of a half-built skyscraper. Otherwise, he zooms down to street level on his Batcycle, eventually transitioning to a hot muscle car (the unveiling of which is one of the movie’s big thrills).

Except for the hidden camera contact lenses, his technology is mostly realistic, and unless one counts a BASE jump on the roof, he cannot fly. Unlike so many DC comic book heroes, Batman is neither a god nor an alien; he doesn’t have fantastic abilities. Bruce Wayne’s superpower is his billion-dollar fortune, but the guy behind the mask is breaking and bleeding like everyone else – a point Reeves reminds us with a photo of Pattinson’s bare back, covered of scars. Rather than relying on a theme, Michael Giacchino’s score surprises, ranging from taut tribal drums to Nirvana to opera, while editors William Hoy and Tyler Nelson avoid obvious angles, leaving quiet spaces in the public to process (and question) what is happening.

As Batman or Vengeance or whatever he’s called, Pattinson is the most brooding of actors to have played the character, which reads like a kind of daredevil nihilism whenever he’s in costume: he doesn’t seems not so much fearless as ambivalent about whether he lives or dies. Once the hood comes off, however, Pattinson’s interpretation becomes more intriguing: brooding and withdrawn, he’s a damaged loner with unresolved daddy issues, grappling with all sorts of complicated emotional trauma. It’s hard to watch a hero suffer so much, and yet his troubled past informs any relationship, including one with a madman who counts Bruce Wayne among his targets.

The Riddler’s schemes are truly chilling, far more than seems reasonable for a PG-13 rated movie (like the remote-controlled explosive collar clamped on Peter Sarsgaard’s drugged district attorney Gil Colson). The idea here is that some of Gotham’s top officials – as well as cocktail waitress and cat burglar Selina Kyle (Kravitz) – are somehow mistaken for Falcone, and the Riddler has taken it upon himself to purge the system of those. elements. The intricate specifics of “Chinatown” about the intertwining of city government and organized crime may make your head spin, though Reeves presents it in a relatively elegant way, so audiences can follow the many twists and turns of the Batman investigation.

It’s first and foremost a detective story, not sentimental as they come – Gwyneth Paltrow’s head is half-expected to appear in a box at some point – and although the authorities bring the Riddler into custody long before the end, the film’s most shocking stretch is yet to come, just as Gotham seems poised to celebrate its next chapter. It’s hard to imagine how Reeves (who was filming “The Batman” during the early days of the pandemic) could have anticipated the Jan. 6 Capitol riot, and yet the signs must have been there all along, because the The film’s chilling climax revolves around activating citizens likely to carry out a mass terrorist attack. In “The Dark Knight,” Heath Ledger’s anarchist Joker felt like he was taken out of your nightmares, but there’s something even more intimidating about the way the Riddler operates. He literally inspires others to become vigilantes too – and judging by real-world imitators inspired by previous Batman films (such as the Aurora, Colorado filming), that could have consequences.

A film like this will inspire countless debates: does “The Batman” really need to be this dark? Can he hold a candle to Nolan’s trilogy? There’s enough room for both to exist, and room for sequels to build on that foundation, which assumes some familiarity with the character’s mythology. That’s the beauty of Batman, which transcends all other heroes in the DC Comics stable: like Dracula or Hamlet, this iconic anti-hero resists endless reinvention. Whether it’s campy or pop, quizzical or conniving, it tells us something new about ourselves every time it steps out of the shadows.

Post-war modern at the Barbican – rebirth of a nation