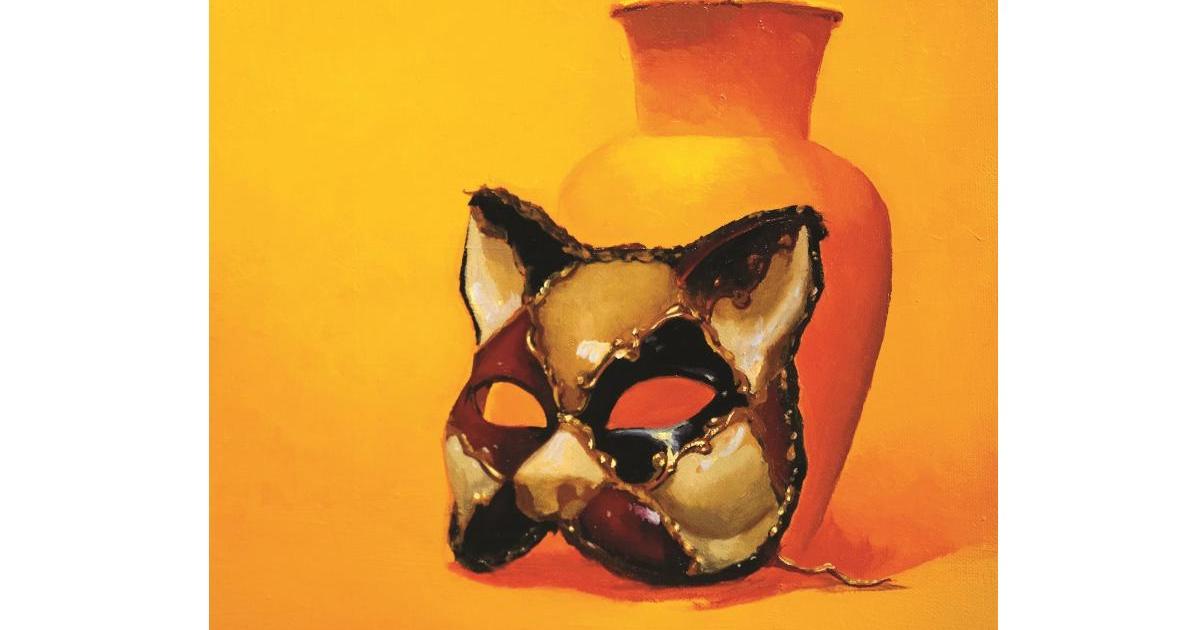 Scandinavia is well known for its artists who immerse themselves in the mythologies of their countries, amid the dramatic contrasts of their weather conditions. From the existentialism of Edvard Munch, who felt “a cry crossing nature”, embodied by this famous terrified humanoid figure on a bridge leading nowhere, to the tumult of the landscapes of August Strindberg; from the solitude in the portraits of the Danish artist Anna Ancher to the extremely calm interiors of the artists of the Danish Golden Age. A latent disquiet pervades even the most poetically hushed interiors of Vilhelm Hammershøi.

Contemporary Norwegian artist Odd Nerdrum defines this metaphysical malaise with these words: “Light is good for the body. Darkness is good for thought. Twilight is where they meet”, essentially bringing together two dualities and describing one of the underlying concepts of his own idiosyncratic work.

In the case of Karl Fröman, the Swedish artist who has taken up residence in Malta, the harsh light of our country contrasts sharply with the climatic and sometimes dark conditions of Sweden.

“In all aspects of life, sometimes we have to look back so that the light of the past can shine on our faces as we walk into the future,” Fröman said. Often the didactic light of the past ironically shows us the way forward; the caramel-hued past and the dark, murky present melt into the twilight of the future. This is somehow in line with Nerdrum’s aphorism.

Fröman was born in Sigtuna, Sweden in January 1985. His mother, herself a figurative artist, instilled in him a love of the old masters. His formal art education included painting restoration studies in England, which complemented this love as he approached the art of bygone eras. 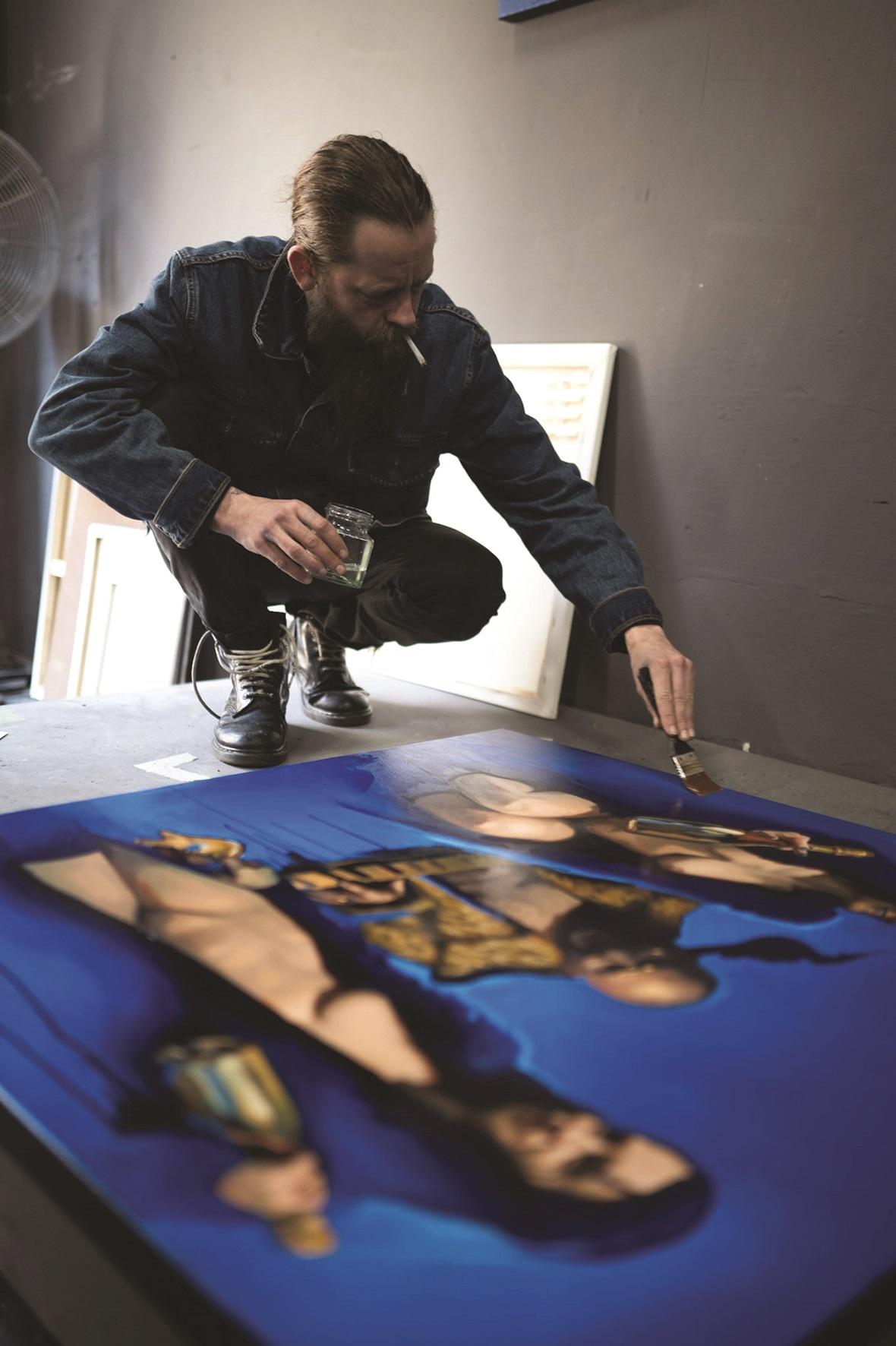 He believes it is important for an artist to achieve a holistic understanding of their environment, different cultures and their philosophies, for a much more eloquent artistic expression of the human condition. Fröman considers himself both an anthropologist and a philosopher; it helps him to introspectively delve into the “semantics” of the world around him.

The jester, the sage and other tales

The title of the exhibition suggests a sort of moralizing tale, a tale in which a would-be simpleton and a sage of yore, the 16th century soothsayer, Nostradamus, meet to discuss and converse. The figure of the madman is a protagonist of many tales coming from the tradition of different countries.

The fool in the king’s court displayed a very sharp wit, ready to assess matters ranging from politics to the love affairs of the royal entourage while pouring out irony and jokes in a seemingly innocent way. The madman could rightly be considered the sage of the situation, a reader of relationships, and gifted with an acerbic wit. 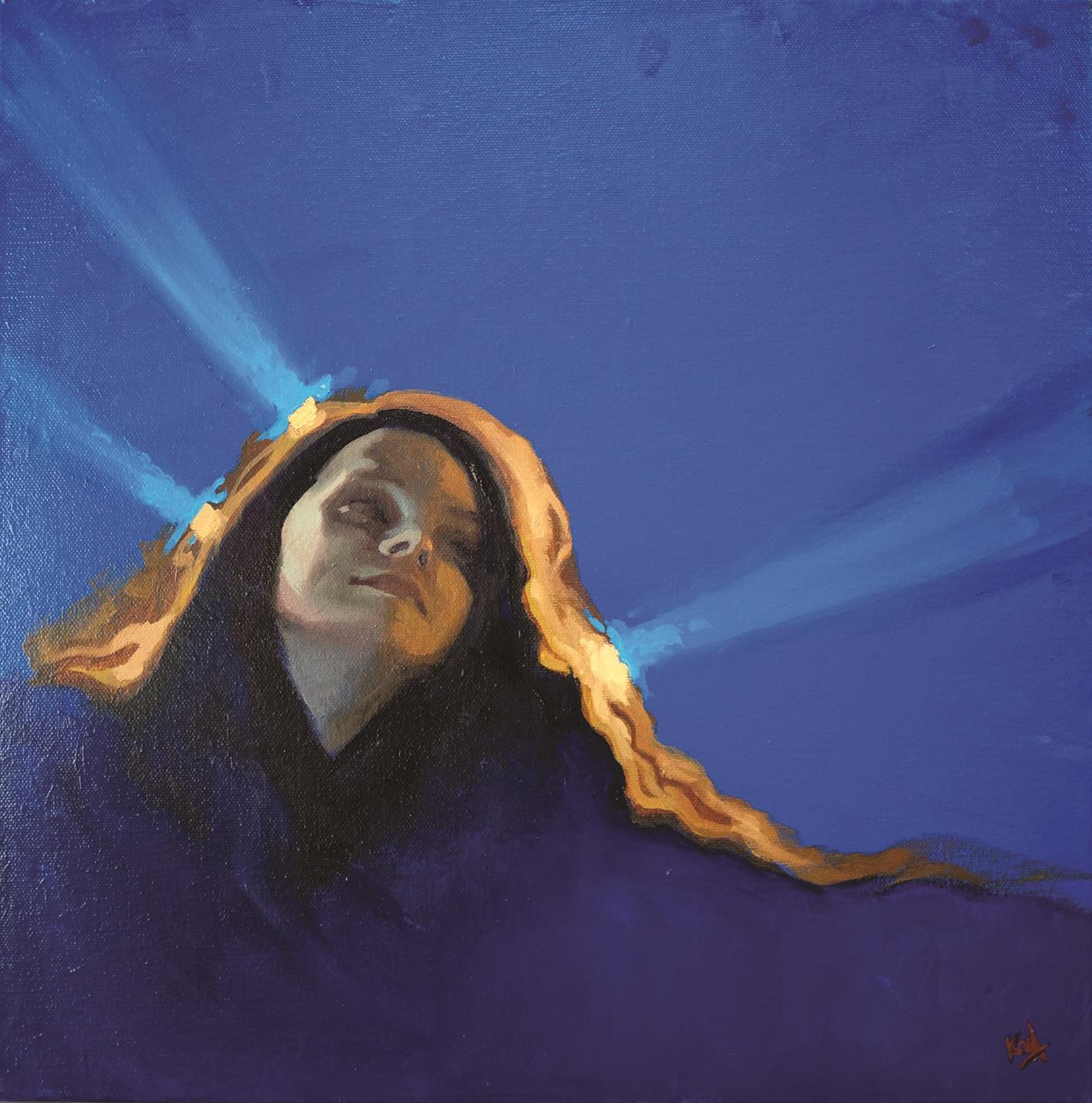 This painting, which bears the same name as the title of the exhibition, is disconcerting. There is a strong sense of camaraderie, of double-edged camaraderie, in the relationship between two female nudes. The composition is slightly reminiscent of that of Masaccio Expulsion of Adam and Evelocated at the Brancacci Chapel in Florence, Italy.

Unlike the early Renaissance masterpiece, Fröman’s two daughters are shamelessly naked and there is no condescending archangel, sword in hand, threatening above their heads. They are like actors on stage, the two different hats defining their roles. A swap of hats redefines their roles and the dynamics of the narrative, with the courtly prankster potentially transforming into the royal astrologer. In today’s world, these roles are easily interchangeable.

Fröman considers himself both an anthropologist and a philosopher; it helps him to introspectively delve into the “semantics” of the world around him

freedom is golden relates to Christian Mariological iconography and Western representation of holy virgins and martyrs. The chromatic contrasts of the celestial spectrum of shades of blue against the flowery gold of the woman’s hair evoke the palette of Odilon Redon. The three rays emanating from the character’s head could be deciphered as a kind of halo, even a transcendental creature. Women are sometimes referred to as “heavenly creatures”, which in today’s politically correct world is considered a rather sexist and chauvinistic understatement.

The artist approaches the genre of still life in the two paintings entitled Fuel and Kitty and the Vase. The laid-back and everyday is the theme of the former while the latter draws on artifacts that may have been lying around the studio. Fuel has a subdued pop factor as the artist elevates his own mundane as worthy of a theme. The Skol beer can, much like Warhol’s Campbell soup cans, reflects the sign of the times – this brand of beer is popular, readily available at watering holes and other outlets. 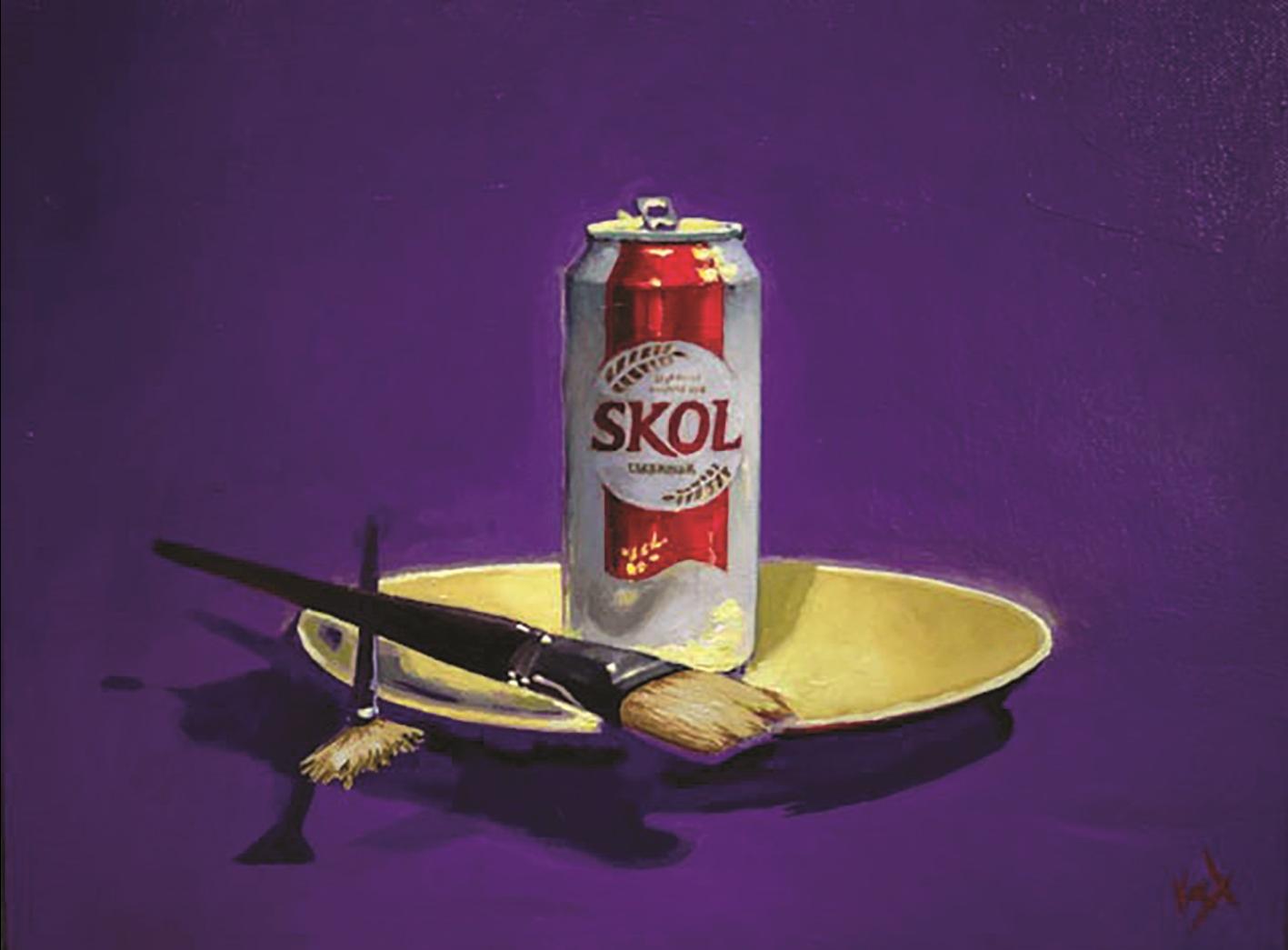 Unlike Warhol’s soup cans, which are intact and have a rather extended shelf life for their contents to be consumed, the zipper of Fröman’s beer can has been opened, the contents already consumed or arriving there and the can will be soon thrown away. This painting can be a celebration of the tools of the trade, the drink as “fuel” to spark the inspiration needed for artistic expression and the brushes to put the concepts so summoned onto the canvas.

the gnaga The mask is a historic staple of the Venetian carnival. This mask covers only the upper part of the face, its wearers free to insult passers-by while addressing them obscenely in a high-pitched voice resembling a cat’s meow. This explains the origin of the term gnaga (gnu is Venetian for ‘meow’). The mask in Fröman’s composition rests on a classically shaped urn which, for many classical religions and civilizations, was a symbol of death. The artist could subliminally deliver a morbid message in the juxtaposition of two seemingly unrelated objects, an invitation to be frivolous and have fun before death finally calls. Kitty and the Vase is flooded with the golden yellow light of hope and transcendence.

Not finished is a path that Fröman sometimes likes to follow, as in Offering of Bacchus. The work-in-progress dimension adds to the aura of timelessness as the piece is left seemingly unfinished, with the artist ultimately determining whether it should remain in such a state. This causes a sense of disorientation in the viewer, as the narrative seems to be stuck somewhere, through the unorthodox dynamics of the composition. 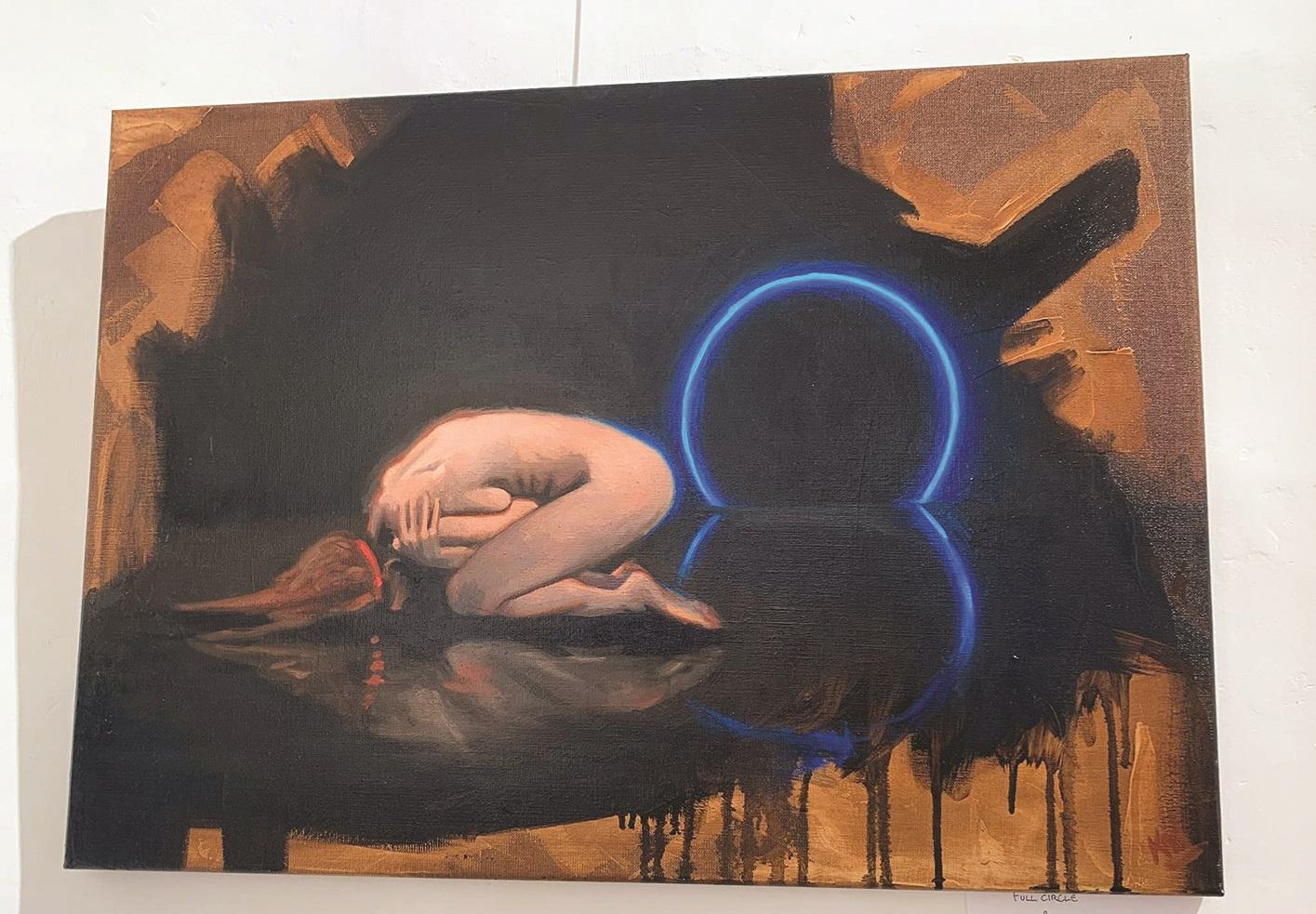 The elements seem to float in space without gravity. Two female nudes rest on a bed or sofa, the intimation of a backrest evoking one or the other, while a bottle of wine rests on an ornate tray, another bottle rests against the thighs of the one of the protagonists. A celebratory aura can be probed. Does nudity categorize them as lovers? Are they contemporary nymphs prey to a bacchanalia, as the title given to the painting by the artist suggests? How does the viewer’s psychological baggage and bias cloud the narrative? What basically happens?

The Fool and Nostradamus is not limited by a specific theme. According to the exhibition’s mission statement:[It] aims to portray a culture straying from the beaten path of its human origins with massively heavy contemporary influences, stylistically blended in the most progressive way possible; techniques from most artistic isms massively appropriate for fusing a good deal of visual art history into a cohesive and happily fulfilling experience. The decision to be the madman or the Nostradamus of this experience is entirely up to us.

The Fool and Nostradamus, curated by Rosanna Ciliberti and hosted by Senglea’s Art by the Seaside Gallery, is open April 1-14. For more information on opening hours, visit the gallery’s Facebook page.

Independent journalism costs money. Support Times of Malta for the price of a coffee.

Skirball Cultural Center Announces Opening of “I’ll Have What She’s Have”: The Jewish Deli