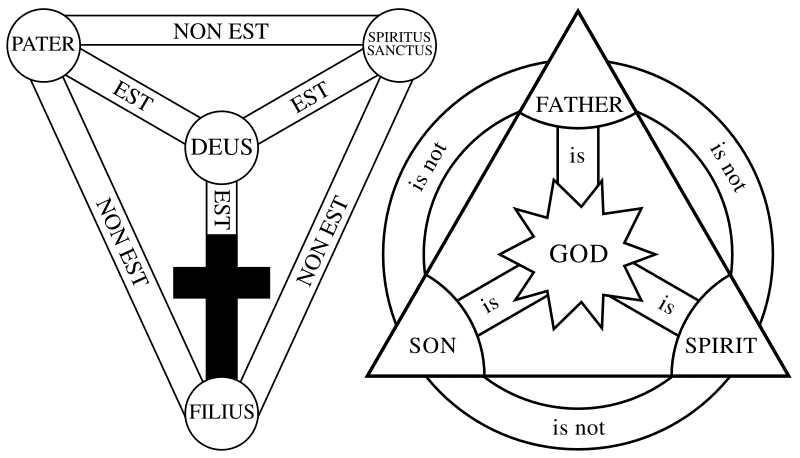 The “social trinity” against Nicene Christianity

Which God do you worship? For Christians, the object of their faith is the one God in three persons, the Trinity of Father, Son and Holy Spirit.

After being minimized or denied in mainstream liberal theology, the Trinity is back in vogue in these circles. But not in the sense of Nicaea and Athanasian Creeds, which teach, for example, that the Son is “of one substance with the Father.”

The Church Fathers explained the Trinity in terms of “being”, with the related concepts of “essence” and “natures”. But modernist philosophy, especially existentialism which greatly influenced modernist theology, moved away from these concepts, leading to relativism and subjectivism in postmodern thought.

Thus, contemporary theologians have redefined the Trinity in terms of “community”. In the “Social Trinity”, the Father, the Son and the Holy Spirit are distinct persons who come together to form a community. And we must do the same. And since the Father, the Son, and the Holy Spirit—designed primarily tritheistically—are equal to one another, we should have the same equality in our families, our churches, and our nations. This provides a theological basis for mainstream Protestantism’s current emphasis on feminism, race, LGBTQ issues, and more.

But now some ostensibly conservative evangelical theologians are Also replacing the doctrine of the Trinity as formulated by the early church in the creeds with the social Trinity.

Matthew Barrett, a professor at Midwest Baptist Seminary, writes about the whole phenomenon in an article for Christianity today entitled Evangelicals have made the Trinity a means to an end. It’s time to change that, featuring the game “For 2,000 years, church leaders have held to the same Trinitarian doctrine. How did we lose our way? (The item is behind a paywall, although you can get a limited number of free items.)

He points out that evangelicals who do this sometimes use the Social Trinity to support egalitarianism (the notion that men and women should be completely equal in their roles within the family and church), while d Others use it to support traditional family roles (since God the Father is the “head of the family”).

When these evangelical theologians are accused of holding views on the Trinity that are clearly heretical by all standards of the historic Church, they invoke “sole scripture.” They say that as evangelical Protestants they are not bound by beliefs, only by the Bible, which they say supports their view.

Never mind that the Reformation was fully committed to ecumenical beliefs, Nicene Christology and the historical doctrine of the Trinity, all of which are biblical. The same is true of later Protestants and Evangelicals, including those who did not use creeds but considered their teaching on the Trinity to be that of Scripture.

All of these Christians of the past, however, must have been mistaken about the God they served. Only now do we understand the true community of the gods, these evangelicals imply, in a view that happens to coincide with that of liberal theologians.

Professor Barrett points out that the defenders of the Social Trinity do not even understand the Nicene teachings they criticize. They use, he says, the doctrine of the Trinity as a means to an end, revising a fundamental teaching of Christianity to fit with their social teachings, whether left-wing or right-wing.

His article for Christianity today, which cites names and details these issues, is taken from a book he wrote on the subject and titled

I would add that the truth that the Father and the Son share the same substance is absolutely necessary for a solid understanding of the Incarnation. And that, for us Lutherans, the Nicene emphasis on to be is necessary for our sacramental theology, our teachings on the two natures of Christ and the imparting of attributes, the Atonement, and ultimately the gospel.

The Social Trinity explains how some theologians—both liberal and evangelical—may say that God punishing His Son for our sins amounts to cosmic “child abuse.” They do not grasp the implications of the Incarnation, that the Father and the Son are one substance, so that in Jesus God takes into himself the sins of the world and atones for them by his own death for our salvation.

Illustration: 13th century version of ‘The Shield of Faith’, left, plus modern version, by AnonMoos, Public Domain, via Wikimedia Commons

Is Bernard-Henri Lévy a hero, an egocentric or both? – The Front