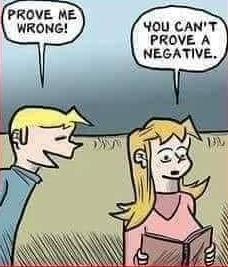 There is a teapot orbiting the sun. You do not believe it ? Prove it.

This cartoon below is taken from the ‘teapot analogy’ of the English philosopher and Nobel laureate for literature Bertrand Russell (1872-1970), who argues that the philosophical burden of proof falls appropriately on anyone who claims arbitrarily and forgery-proof – that invisible deities exist, for example – rather than on skeptics for refute such unverifiable propositions.

Here is Russell’s famous analogy, written for an article commissioned in 1952 that was never published:

“Many Orthodox speak as if it is up to skeptics to refute accepted dogmas rather than dogmatists to prove them. This is, of course, a mistake. If I were to suggest that between Earth and Mars there is a porcelain teapot revolving around the sun in an elliptical orbit, no one could refute my claim provided I took care to add that the teapot is too small to be revealed even by our most powerful telescopes. But if I were to go on to say that since my assertion cannot be refuted it is an intolerable presumption on the part of human reason to doubt it, one would rightly think that I am talking nonsense. If, however, the existence of such a teapot was affirmed in ancient books, taught as sacred truth every Sunday, and instilled in the minds of children at school, reluctance to believe in its existence would become a mark of eccentricity and would entitle the skeptic to the attentions of the psychiatrist in an enlightened era or of the Inquisitor in an earlier era.

Believers in the United States, still mostly Christians, do not appreciate being held responsible for obvious factual errors in the doctrines of faith they espouse, sniffing that opponents have never been able to irrefutably refute that the God they worship, who was never realized in reality, actually exists.

This is exactly Russell’s point: that the onus is on hypotheses to prove what is patently unbelievable, not on skeptics to refute.

“Russell clearly refers to religion [in his analogy]. He compares the transmission of belief in the teapot to the transmission of religious beliefs, which, like the teapot, cannot be justified. The existence of the deity is not proven, just like the teapot is not. … Religion must claim absolute certainty; He does not have a choice. You may not fully believe if there are any doubts about the proposition in the first place. This means that religion does not meet the conditions to be called science, that is, to be falsifiable. Already. And this is where science and religion separate. Religion has no place in science; science is based on factual evidence, not on what a person believes to be true. Likewise, religion is never scientific; you can never get the amount of evidence required to achieve the “absolute” level of confidence.

Despite a long career of massively influential academic and popular writing in philosophy and mathematics, and more widely accessible subjects including atheism, Russell is probably best known to most who have heard of him for his ” analogy with the teapot “laconic and a brief public lecture. in 1927 entitled “Why I am not a Christian”, that the Encyclopedia Britannica says “has become a classic locus of atheistic rationalism.

Apparently, Russell’s much-vaunted rationalism, however, caused him to fail in series in his personal life. He got married four times. (It’s not that love is rational, of course.)

How Calder pierced Albert Einstein and Sartre – the forward