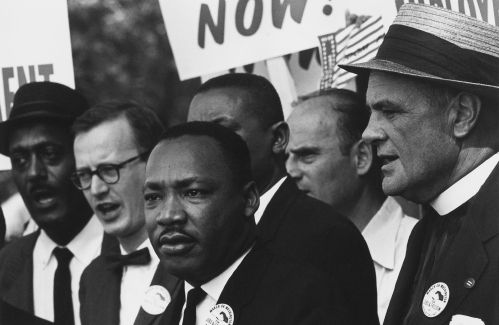 This weekend, as America honors the Reverend Martin Luther King, Jr., it is important to recognize that together we live in an increasingly fragile democracy trying to survive repeated onslaughts by anti-American forces. irrational – assaults perpetrated by other Americans.

A democracy that, as former New Hampshire Supreme Court Chief Justice John T. Broderick recently wrote, “…is in jeopardy. Not of foreign enemies, but of willful ignorance and unbridled ideology unconstrained by truth, decency or any other democratic value…”

In 1968, just three years after the passing of the Voting Rights Act of 1965 and just six months after the assassination of Dr. King in Memphis, Tennessee, racist and segregationist presidential candidate George Wallace stood on a Madison Square Garden scene in New York. and said to over 16,000 true believers:

Support that columnist Richard Strout described as “…never again will you read about Berlin in the 1930s without remembering that savage confrontation here of two irrational forces…the most capable demagogue of our time, with a voice of venom and an intimate knowledge of the prejudices of the low-income class.

There is an irrational threat that still corrupts the once noble Republican Party formed in 1856 in part to expand federal authority to oppose slavery and polygamy; a party led today by a demagogue once again feeding on partisan prejudice and thriving on the silence and fear of its intimidated and defeated members.

“There comes a time when silence is betrayal,” Dr. King told us, words as true on MLK Day 2022 as they were when spoken, for America’s very survival as a democracy is at stake.

On January 6, 2021, this demagogue, promoting perverse and seditious lies and without any form of political pressure, incited an insurrection by telling a delirious crowd: “We won this election, and we won it by a slide of land” and “If you don’t fight like hell, you won’t have a country.

The true believers of this demagogue shouted their support.

The evil they support is not just the “big lie” or insurrection. It is the evil of anti-Semitism, xenophobia and Islamophobia, of grievances and resentments, of ignorance and bigotry, which flourishes unchallenged by Americans who lack the courage to denounce what is done in their name or in the name of their party!

The evil they support is ongoing Republican actions to limit the franchise and reduce the voting power of people, primarily people of color and minority communities, at the state and local levels.

The evil they support in their complicity is to oppose the Freedom to Vote Act, which establishes minimum standards of ballot access for all American citizens, and the Advancing Human Rights Act. vote John Lewis, which aims to combat discrimination in voting by updating and restoring the 1965 Voting Rights Act.

The evil they support is not unknown. Indeed, Dr King wrote, in his “Letter from a Birmingham Jail:”

“First of all, I must confess that over the past few years I have been seriously disappointed by white moderates. I have almost come to the unfortunate conclusion that the great stumbling block of the negro in his march to freedom is not the White Citizen’s Council-er or the Ku Klux Klanner, but the white moderate who is more devoted to “order” than to justice; who prefers a negative peace which is the absence of tension to a positive peace which is the presence of justice; who constantly says “I agree with you in the goal you seek, but I cannot agree with your methods of direct action”; … who lives by the myth of the times and who constantly advises the Negro to wait for a ‘more suitable season’.

Today, as we face this existential challenge to our democracy, a nation founded on the principles that all people are created equal, that all aspire to be free, we must all either support Dr King, defend the justice or submit to the forces of intolerance and bigotry.

(Robert Azzi is a photographer and writer who lives in Exeter. His columns are archived at theotherazzi.wordpress.com.)