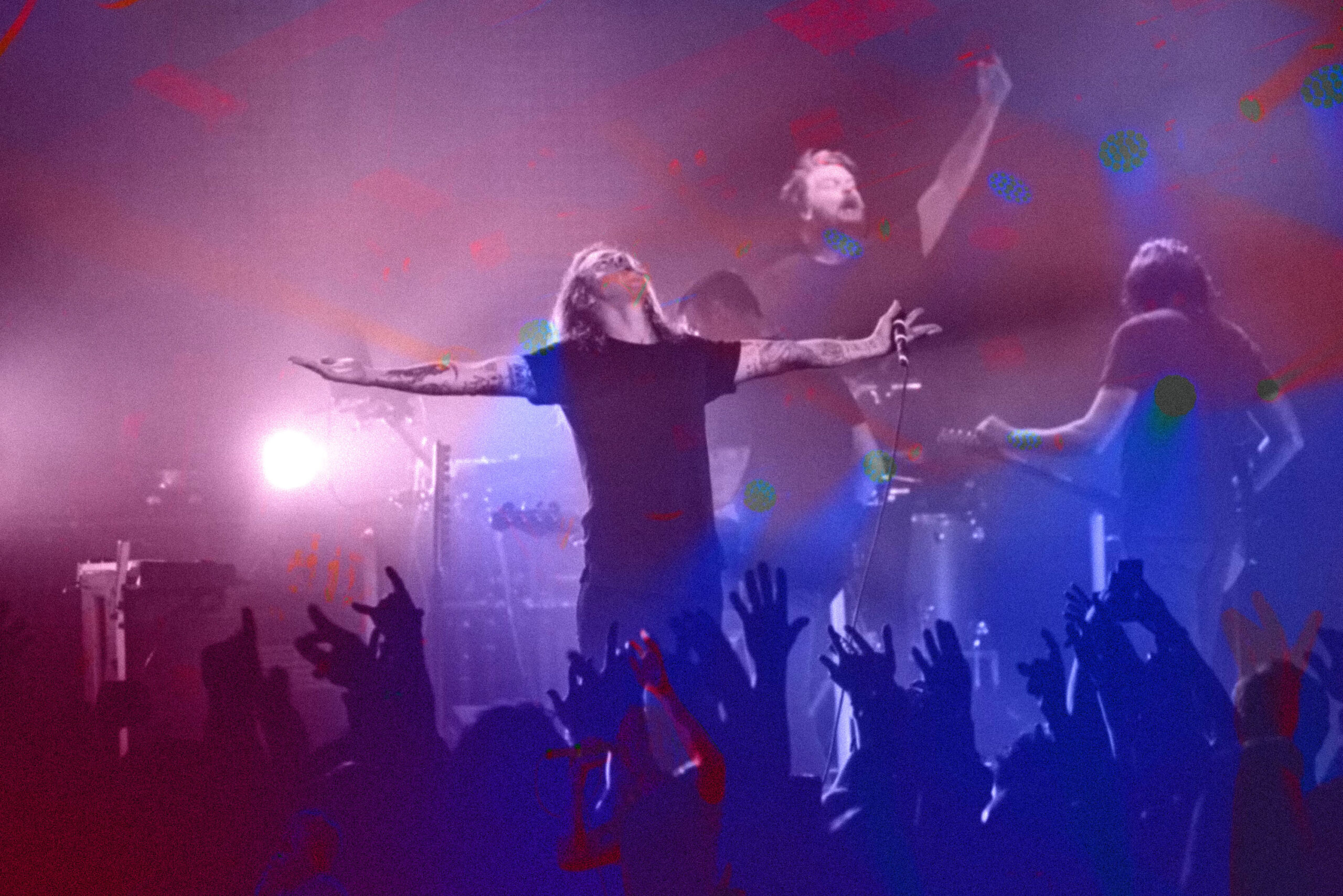 Above: Below performing at Brooklyn Steel on March 17. Photo by Buscar Photo.

As spring break was coming to an end, I thought I’d let it end with a bang. On March 17, Underoath played to sold-out crowds at Brooklyn Steel in Williamsburg with bands Stray from the Path, Bad Omens and Spiritbox. It was a great experience for my first metal show with an energetic crowd, tons of moshing and enough cathartic energy to get me through this semester.

The show started around 7 p.m. with Stray from the Path – a hardcore punk band from Long Island – taking the stage first. They went through tracks like “Outbreak”, “Goodnight Alt-Right”, “Fortune Teller” and “Guillotine”, songs that encourage fans to be proud of who they are. Between songs, they reminded the audience to go against the system and hold corrupt cops and politicians accountable.

Singer Andrew Dijorio opened the show with a political statement. “You are all welcome to come to a Stray from the Path show, but let’s be clear – no to racism, no to fascism and no to the alt-right!”

After Stray from the Path finished its set, we all patiently waited for Bad Omens. They arrived with an elaborate display of lights, opening with the title track from their recent record, THE DEATH OF PEACE OF MIND. Frontman Noah Sebastian appeared with silent but stunning mastery of the stage, wearing an all-black outfit and a singular black glove. The stage plunged into darkness for a while, then came alive with the song “ARTIFICIAL SUICIDE.”

“Welcome, Bad Omens Cult,” Noah said from behind a ski mask as the crowd cheered. The band then went through a set that mixed new tracks with older ones, like “Dethrone” and “Like a Villain.”

Then it was time for the last opening band, Spiritbox, led by Courtney LaPlante. As someone who grew up looking up to women in rock like Lacey Sturm and Brody Dalle, seeing Spiritbox perform was a delight. LaPlante had excellent vocal control as she transitioned from shouting to singing. She has a great screaming style that is on the low end, more like a throaty growl sound. She interacted with the crowd a few times, including a funny moment when she told the mosh pit throwing a beach ball, “you’ll get your ball back after class.” Courtney also shouted Underoath, asking the crowd to applaud them for the struggles they went through as a group. The Spiritbox set was a mere ten tracks long, spanning songs from “Rule of Ninesto “Circle With Me” and ending with “Eternal Blue.”

Around 9:30 p.m., a single spotlight illuminates the scene. A type of robot appeared, illuminated by the projector and its helmet.

“Good evening,” he said. “Thank you for coming to the Underoath Voyeurist concert. Your presence here marks a lifetime of events that must have happened just as they did to bring you here.

He then explained the show’s guidelines, asking the audience to look around and feel each other’s presence. Then he would invite us to reflect within to reflect and feel our own breath – the whole talk was akin to guided meditation.

The exercise then ended with the crowd raising their arms as Underoath came on stage to play “Damn Excuses”, the opening song of their Voyeurist album. Unlike the other bands – namely Bad Omens, who performed songs from their latest album – Underoath stuck to their classic songs for the majority of their set. Only a few tracks were from their most recent albums, like Erase me and Voyeurist.

This type of setlist makes sense; a majority of Underoath fans, at least of the New York show, are more familiar with their older stuff anyway. Early 2000s albums They only seek security and Define the main line are considered the most iconic and a key part of their history as a Christian metalcore band. In 2018, the Erase me diverted era of this sound, with the band stating that they were no longer Christians. They explained on their “Making of Voyeurist” Podcast that Erase me is a controversial body of work that came as they began to redefine themselves. This album also marked the return of drummer Aaron Gillespie, which was an adjustment for the band.

But, despite all that, Underoath has grown so much. They gave Gillespie the spotlight a few times to showcase his drumming skills, which kept the crowd mosh and moving with the music. Underoath aren’t a Christian metalcore band anymore – they’ve evolved a lot in their sound, and a lot of Erase me focused on their current relationship with faith and identity. These themes of existentialism continued Voyeurist as they continued to blend contemporary and electronic elements with their established sound. Erase me was Underoath’s most commercially successful album; with it, they even earned a Grammy nomination for Best Metal Performance. But such an experimental record could only alienate part of their audience.

The middle of their set merged past and present. At one point, the crowd joined in a rousing a cappella performance from the bridge of “It’s Dangerous Business Walking Out Your Front Door,” then thrilled by the intensity of “No Frame.” On a nostalgic note, “It’s Dangerous Business…” is the first Underoath song I’ve ever heard. At the time, it was the loudest song I had ever heard…and the rest was history.

After going through several high-energy songs, I was surprised to hear the opening chords of “Too Bright to See, Too Loud to Hear”, one of the few overtly denominational songs in Underoath’s earlier discography. The song is from their 2008 album, Lost in the sound of separation, one of the last albums Aaron Gillespie recorded on before his departure in 2010, and it uses Aaron’s vocals alongside Spencer’s screams – a fine example of what makes Underoath melodies so memorable. The song is about what life would be like if one didn’t serve God or was unwilling to forgive others, and just before the breakdown at the end, all the members sing, “Good God, can you still take us home? Hearing this live was incredibly powerful, especially knowing all that Underoath has gone through publicly and the backlash they have received over the years from the church.

Underoath ended his set with “A Boy Brushed Red Living in Black and White”, from They only seek securityand then “Pneumonia”, the instrumental finale of Voyeurist which pays tribute to the death of guitarist Tim McTague’s father.

Overall, the show was an incredibly moving experience. It was great to hear the songs I grew up with and even to hear bands I didn’t know before. Considering it was my first metal gig, I was a bit shy at first, but the gig itself was great, and I’m proud to say I did well in my first mosh pit. As I walked out of the show, I thought back to when, in high school, I used to do lyrical posters of Underoath songs. I realized that I finally got to hear all of those songs live – the songs that formed a big part of my love for metalcore. It was so much fun and honestly a little therapeutic. Everyone in the mosh pit had great energy, were incredibly nice and concerned about everyone’s safety, and sang the songs that each had meaning to us – it was cathartic. Maybe I’ll do some crowd surfing on the next tour.