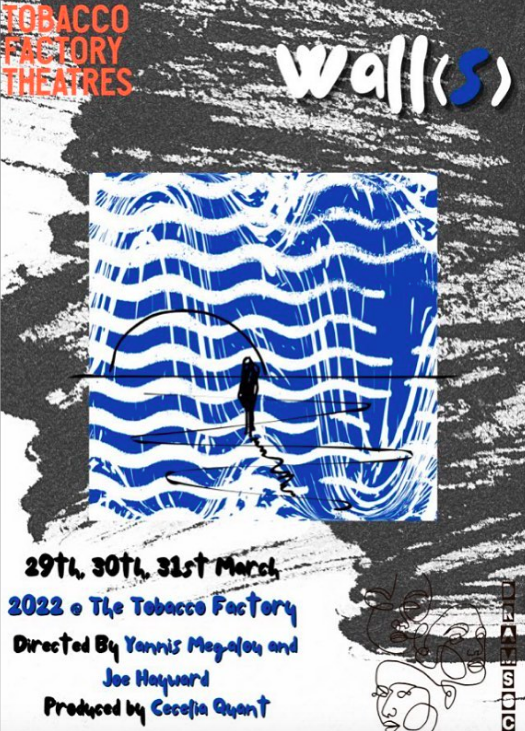 After their critically acclaimed production of ManosphereThe University of Bristol Drama Society (DramSoc) is back with another groundbreaking theatrical spectacle that deals with perennial questions that plague our collective conscience through the perspectives: morality, integrity, pragmatism and fear of death.

Screenwriters, Yannis Megalou and Joe Hayward look to continental Europe for inspiration where they find a hidden gem in the evocative short story, Le Mur (The Wall) by Jean-Paul Satre.

Satre was undoubtedly an intellectual pillar of the 20th century who exerted considerable influence on ethics, morals, philosophy and literature. However, self-effacing as a fiction writer, Satre used his collection of short stories as a vehicle for his existentialist musings. His unshakable faith in humanity is still present on every page.

The original short story is set during the Spanish Civil War which lasted from 1936 to 1939. It revolves around three political prisoners awaiting their morning execution by firing squad. They stare at a wall at night where their minds are overwhelmed with conflicting emotions. But there is a way out. If prisoners were to divulge information about the whereabouts of a wanted anarchist leader, their lives will be spared. Hit hard by this moral conundrum, prisoners must choose between integrity and self-preservation.

In the hands of Megalou and Hayward, Stare’s lesser-known novella was sublimated into a play of rare brilliance that presents Satre’s existentialist themes in a new light. The adaptation is full of fresh details, bringing it to a modern audience. The number of prisoners is increased, representing a realistic sample of society. The conflict remains nameless. Think you know the ending? The directors have come a long way from Satre’s ending and are ready to take audiences down an uncharted road.

The creators who had the plan for the production since last summer were thrilled with the turnout for the auditions which forced producer Cecelia Quant to announce additional dates for the auditions. Both Megalou and Hayward believe that the body language of the cast conveyed on stage is as important as the dialogue, so they worked hard on movement and choreography.

After having rubbed shoulders with the brilliant Anna Sharp as assistant director for Manosphere, Joe Hayward is blessed with plenty of experience for such a challenging theatrical production as Wall(s.) Yanni Megalou, making his directorial debut, knows no nerves but relishes the challenge. It is full of innovative ideas to make the production smooth and sophisticated. Cecelia Quant, who was the creative glue that held the cohort together, relieved the directors of all the logistical issues from booking rooms for rehearsals to publicity.

Get ready for a roller coaster ride as the highly polished cast once again hit the boards between March 29 and March 31 at the Tobacco Factory Theater.