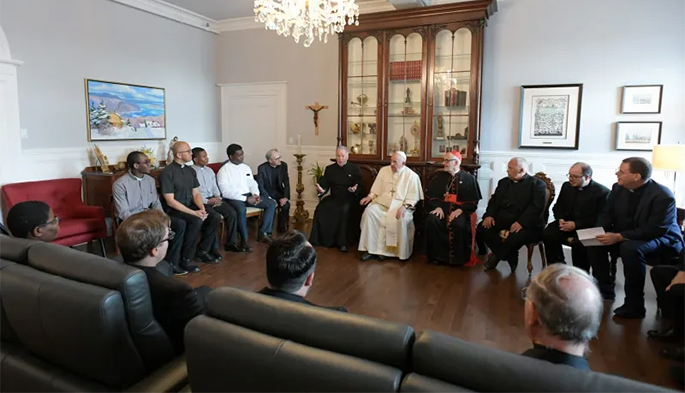 Pope Francis explained to Jesuits in Canada how his experience in Latin America shaped his beliefs about synodality, liturgy and divisions in the Church, during a private meeting in Quebec City last week.

“In case of conflict, the liturgy is always abused,” Pope Francis said, according to a transcript published by the Jesuit periodical La Civiltà Cattolica Aug. 4.

He explained: “Thirty years ago in Latin America there were monstrous liturgical distortions. Then they moved to the opposite side with retrograde drunkenness with the old. A division has been established in the Church.

The pope went on to tell the July 29 gathering of 15 Jesuits in Quebec that his actions with regard to the liturgy were “intended to follow the line taken by John Paul II and Benedict XVI, who had allowed the ancient rite and requested further verification.

“The most recent audit has made it clear that there is a need to regulate the practice, and above all to avoid it becoming a matter of, say, ‘fashion’ and remaining more of a pastoral matter,” Francis said.

“I look forward to the studies that will allow us to refine our reflection on the important theme: the liturgy is the people of the public praise of God.

During the hour-long conversation with local Jesuits, the pope also spoke about tradition and doctrine.

He said: “The vision of the doctrine of the Church as monolithic, to be defended without nuance is false. This is why it is important to respect the tradition, the authentic.

“We must take the origin as a reference, not a particular historical experience taken as a perpetual model, as if we had to stop there. ‘Yesterday it was done like that’ becomes ‘it has always been done like that’. But it is a paganism of thought! What I said applies equally to legal matters, to law,” the pope said.

Pope Francis commended Canadian bishops for acting in unity with one another, saying “miracles…can happen when the Church is united.”

“This Canadian experience is an example of a united episcopate. When a bishopric is united, then it can face the challenges that arise,” he said.

“Of course, there is no point in hiding it, there are those who work against healing and reconciliation, in society and in the Church. Just last night I saw a small group of traditionalists protesting and to say that the Church is something else. … But that’s the way things are,” he added.

The Pope warned that “one of the worst enemies” of Church unity today is “ideology”.

Pope Francis spoke at length about “synodality” and shared a story about his experience of participating in the Synod of Bishops in 2001 as a rapporteur when he was Archbishop of Buenos Aires.

A rapporteur presents a summary of the topics that emerged during the synod discussion, as well as information and clarifications for the synod’s final document.

Pope Francis recalled: “I remember that opinions were collected and sent to the General Secretariat. Then I gathered the material and prepared it for voting. The secretary of the synod came to me, read the material and told me to remove this or that detail.

“There were things that he didn’t consider appropriate and he censored them. There was, in essence, a pre-selection of material. There was little understanding of what a synod is. At the end of the last synod, in survey of the subjects to be treated in the next, the first two were the priesthood and the synodality.

“I understood that it was necessary to reflect on the theology of synodality to take a decisive step forward,” he added.

Pope Francis said he launched the two-year global consultation process leading up to the 2023 synod on synodality to reiterate that “the Church is either synodal or it is not the Church.”

“If you want to read the best theology book on the synod, then reread the Acts of the Apostles,” he said.

If you enjoy the news and opinions provided by Catholic World Report, please consider making a donation to support our efforts. Your contribution will help us continue to make CWR available to all readers around the world for free, without subscription. Thank you for your generosity!

CNLP 511: Rich Villodas on the new exodus in church attendance, why pastors continue to fail, and the next generation of pastors and churchgoers