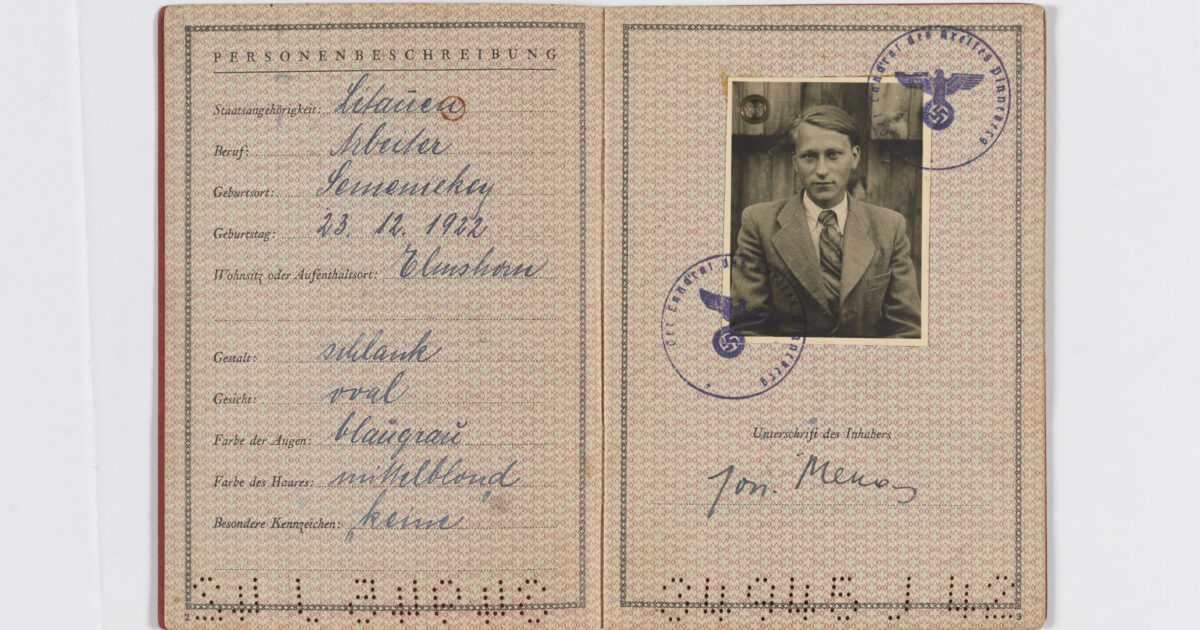 When it comes to Mekas’ wartime past, conservative texts tend to be ill-reasoned and riddled with mistakes, big and small. The show’s online documents set the tone from the start, claiming that “during the last moments of World War II in 1944, Mekas was forced to flee his native Lithuania”, when every schoolboy knows that the war ended in 1945. left in 1944” or a place “where he could not return [to] until 1971”? The same text offers both versions. We’re told that Mekas was “largely self-taught” but also attended high school, was tested at a gymnasium high school, and “taught courses toward a degree at the University of Mainz. while living in camps for displaced persons”.

This confusion is expanded in the exhibition catalog, which Taxter co-edited with the curators of a sister exhibition at the National Art Gallery of Lithuania, Lukas Brasiskis, Lithuanian doctoral candidate in film studies at NYU, and Inesa Brašiškė, historian of art and curator based in Vilnius. Published by Yale University Press, the catalog features four essays, a timeline of Mekas’ life, and hundreds of color images of film stills and ephemera, some of which appear in the exhibit itself. Mekas’ essays on craft that follow the curatorial statement are carefully researched and well worth reading. Ed Halter, founder of the Brooklyn cinema Light Industry, gives a participant observer’s perspective on Mekas’ work (and mixed reception) as a film programmer. Andrew Uroskie’s contribution examines how Mekas perceived and used performance, with particular attention to his award-winning film The Brick (1964). An essay by Cash (Melissa) Ragona explores Mekas’ innovative use of sound and silence, detailing his connections to John Cage, Lou Reed and Lithuanian folk music. But two important pieces – the catalog introduction and curator Kelly Taxter’s opening essay on Mekas’ life – lack the rigor and originality of the essays that follow, offering instead a version of Mekas’s biography. which obscures rather than illuminates.

In the introduction to the exhibition catalogue, the publishers promise that Mekas’ work will be “contextualized in a timeline that sketches Lithuania’s interwar political history, offering insight into the conditions under which Jonas and Adolfas were forced to flee their home”. As for the timeline, attentive readers might notice a few things missing under 1941. In fact, everything that appears under 1941 – that very significant year in Lithuanian history when the Nazis entered and oversaw the mass murder of most of the large Jewish community. — are two events in June: the German émigré Hans Richter taking over as director of the Institute for Film Techniques in New York, and the mass deportations by the Soviets of Lithuanians to Siberia shortly before the Nazi invasion. Unlisted events include: the June uprising led by the anti-Semitic Lithuanian Activist Front, the Nazi invasion, the start of the Holocaust, and Mekas’ early work in an Activist Front newspaper. Instead, the reader finds them incorrectly counted on the page, under 1942. By blurring the order of these events and referring to the Mekas diaries only by their pre-war names and not those they were using during the German occupation, the editors effectively extracted Mekas from its distant – straight tangles. This is not an innocent mistake but a mode of prevarication that Mekas himself practiced in interviews and memoir pieces as a means of obscuring his true wartime activities.

Kelly Taxter’s opening essay – who, the catalog tells us, had “advocated for a Mekas investigation” since joining the Jewish Museum in 2013 – is a masterclass in revisionism whose treatment of the WWII would not be out of place on the most right-wing Lithuanian historical websites and commissions. Taxter’s article is a hodgepodge of inflated statistics about victims who suffered at the hands of the Soviets (she cites two million Lithuanian IDPs versus the more accurate 100,000), easy comparisons between Nazis and Soviets , equivocal clauses on Nazi censorship, and a revamped account of events. Additionally, she follows Mekas’ own method of strategically collapsing distinctions between Nazis and Soviets, writing, for example, “the Soviet and then Nazi-controlled newspapers in which Mekas published his poetry contained anti-Semitic propaganda”. It’s a tactic with a steep history in Lithuania, where the same state-sponsored commission investigates “the crimes of the Soviet and Nazi occupation regimes,” ironing out historical distinctions between the regimes. (I found no evidence that Mekas published during the Soviet period of 1940-1941, nor any anti-Semitic propaganda published in Lithuanian newspapers of that time. Articles published under the Nazis are, on the other hand, and as one could s expected, full of anti-Semitism.) Taxter then doubles down on the misleading amalgamations: “Anyway, there hadn’t been a free press since 1939, when the Soviets took over of the Molotov-Ribbentrop Pact. The characteristic sloppiness with dates aside – a quick glance at the timeline in his own (admittedly unreliable) book would show that Lithuania was invaded by the Soviets in 1940 – Mekas himself told me in a interview that during the Nazi occupation only the front pages of the newspapers were dictated by the Germans and that he and his friends had full editorial control over the rest. Perhaps worst of all, in addressing the Nazis’ genocidal campaign against Lithuanian Jews, Taxter writes: “Many Lithuanians were willing collaborators in this brutal mass extermination; under the Soviet occupation, they resented Jews deeply, who could open businesses and hold public office with the support of the oppressor. This overly clear explanation of the Holocaust, with its false assertion that Jews received preferential treatment under the Soviets, is a blatant example of victim blaming; it also unquestionably reproduces the right-wing stereotype of the Judeo-Bolshevik, which presented the Jews as the natural enemy of the Lithuanians.

Taxter’s attempts to position Mekas as a moral authority by trumpeting his “resistance to the Nazis” is also worth examining. For example, Taxter’s essay states – and the exhibit wall text repeats – that “Mekas’ underground resistance activities made him an enemy of both [the Nazi and the Soviet] schemes”. Mekas recounted how, under the Soviet occupation, he disseminated anti-Soviet pamphlets, but he did so as part of a group that would later take over the city newspaper under the umbrella of the Ultranationalist Lithuanian Activist Front, who aided the Nazi occupation. After working in this newspaper and another newspaper founded by the fascist Lithuanian Nationalist Party for the next three years, Mekas said he again took part in underground activism, this time against the Nazis. Let us accept, for the sake of discussion, Mekas’ assertion, reproduced by the Jewish Museum in the chronology of the exhibition catalog, that in July 1944, when the Germans were losing on the Eastern Front, he served as “typist for a resistance group that publishes[d] a weekly bulletin containing transcripts from the BBC and other news broadcasts. Since Mekas fled Lithuania in mid-July – retreating deeper into the Third Reich at the last possible moment before the Soviets entered – that would mean that as the tide turned in the war, he typed what could only be one or two issues of this “weekly” bulletin. By then he had risen through the ranks of the Lithuanian collaborationist literary world and, like many Lithuanians, he welcomed the Germans in 1941. Mekas frequently confused the timing and nature of his clandestine activism in writings and interviews, and Taxter presents also a mixed version: “While in high school he started distributing pamphlets containing transcripts of BBC broadcasts”, she wrote. “The pamphlets were circulated among intellectuals and played an essential role in organizing the resistance.