Zen meditations on the mysteries of the Trinity, Christian and Buddhist

So, there I was minding my own business browsing Youtube’s determined algorithmic offerings, when a delightfully funny and informative clip appeared from “Lutheran satire.”

The music video, “St Patrick’s Bad Analogies”, is a worthy adventure through the Christian trinity accord, while lightly poking fun at the English missionary to the Irish, St Patrick. So you know. To win. To win.

I see significant problems with a central teaching of a tradition that is so oblique and contrary in its structure to common sense. Well. It could be said of the world we encounter every day. As well as several things that I believe in with all my heart. So there is that.

And the truth is that I find the Trinity infinitely intriguing. Convincing even. I’m sure the good folks at Lutheran Satire can unpack which of the many trinitarian heresies I’m dancing with. But, being more innocent of the deeper nuances of the story and understandings of Trinity that have been condemned here and there, I offer my own reflections from my own encounters with deep matter.

I’ve been working on it for a while, and have already published much of what follows. Still, it’s updated and, I guess, if anything, a bit messier. Another thing a bit like life. So there’s that too…

Looking for a start, a few years ago when I started taking night classes at the local community college in what would turn out to be the start of my “academic” life, one of my favorites was an investigation into the history of art. The professor said his real goal for us was so we could go to a cocktail party and look like we knew something about the wide range of art.

I can’t say if he was successful in my case. I’m still awkward enough at such parties to simply avoid them. But much of what he taught over four decades ago got stuck here and there in my fading synapses.

For example, a prominent Zen teacher used to say that he liked the idea of ​​the Christian trinity. Even going so far as to say something like “all genuine religions have trinities”. It brought me back to that art class. 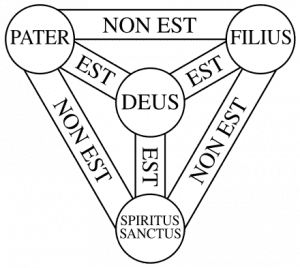 The professor spent some time with the medieval image “Scutum Fidei”, the shield of faith. No one knows the precise origin of the image, but it probably emerges around the 12th century. The earliest certain version is found in an early 13th-century manuscript by Pierre de Poiters”Compendium Historiae in Genealog Christi.”

It is basically a triangle with the three points usually surrounded by circles indicating Father, Son, and Holy Spirit. In the middle was another circle labeled God. Each of the connections in the different directions was labeled either “East” or “Is not”. And with that, a description of the mystery of the Christian image.

I can imagine the professor standing next to the shield slide show, patting it and saying somewhat silently how it “almost makes me believe”. He reiterated “almost” and we moved on.

For some reason there are probably several, this picture and that one “almost” both stuck together. And all these trinities in religions…

As life would have it, in addition to my lifelong commitment to Zen and Zen practices, I would in time fall into Unitarian Universalists. The short name of the community is Unitarians. It was a spiritual current in North America and England, an English-speaking Enlightenment movement. There is also a Reformation-era religious movement in Hungarian culture called Unitarian. Although there was no significant connection between the two movements until the late mid-twentieth century.

The main characteristic of the Anglophone Unitarian movement had to do with reason. It was also called rational religion (and sometimes liberal religion). And as true to the rational they noticed how little direct and clear evidence of the trinity in scripture, the only direct reference to the trinity was clearly an early medieval interpolation, they dismissed it as any kind of necessary doctrine .

Instead, they emphasized ethical living, seeing Jesus as a moral guide, and salvation as a matter of living in accordance with the various teachings of Jesus. The shorthand for this is “religion of Jesus rather than religion about Jesus”.

In the early nineteenth century, people who didn’t like these rational or liberal Christians, noticed this thing about the trinity and called them out for it. Their epithet was unitary. This was intended to show that these rational or liberal Christians were not much different from the Jews or Muslims, the original Unitarians. Rationalists and liberals looked at it and decided it was not a bad crowd to associate with. And they accepted the name.

All of that is history. Nothing to ignore. But. There is also now. And I suspect there’s a reason why a fair number of contemporary Unitarian Christian Universalists consider themselves Trinitarian. They often soften it by saying “tiny trinitarian”. A term that I have never unpacked to my complete satisfaction. But I have a small idea of ​​how it can be met, more like a feeling than an elaborate proposal.

And that’s my experience on the spiritual path where we come across a lot of strange things.

In my own spiritual life as a practicing Zen Buddhist, I cannot say exactly where I realized the purest formulation of the fundamental Zen teaching that form is emptiness and emptiness is form, so precious and important as it is, something is missing from our human encounter. 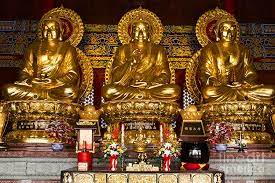 Here we have the two affirmations of reality. The truth that nothing has substance, that everything is madly and completely open: Dharmakaya. The truth that everything plays out in causal relationships, constantly creating and collapsing, the realm of action and history and consequence: Nirmankaya. The mystery includes the absolute identity of these two things, for want of a word. But, there is a third thing. This third. The truth of ecstasy, wonder, magic and dream: Sambhogakaya.

Now I no longer feel the need to cram the two trinities, Christian and Buddhist, into each other. Although they kind of do. As my friend Zen student Dana Lundquist observed while walking the spiritual path, “there are many different real things going on at the same time.”

It is enough that they exist. Enough for my heart and the path I find myself following.

That said, there is another image of the Christian trinity that I find wandering in and out of my dreams.

The image of the Christian trinity that touched me the most was an Orthodox icon created by a 14th-century Russian artist, Andrei Rublev. He used a story from Genesis of Abraham being visited by three angels and with this his material creates an image of the trinity which I find haunts my dreams. It includes languid humans seated around a table. Within it are invisible triangles and circles that cannot be contained in the paint. Beyond that, the play of images and colors we may encounter simply seeps into the preconscious heart and envisions, again, something that mere painting cannot contain. Simple words. Simple gestures. But without disdaining these simple things.

I, well, I really believe it. Shinjin. Confident heart.

We do not know it. We cannot grasp it. We can only open ourselves to this mystery.

But it’s not really that difficult.

It is, after all, the calling of our human hearts.

The reality on the other side of our knowledge.